In February, the European Commission warned of the risk to the sustainability of Spain's economy entailed by its high current deficit. In fact, despite the sharp fall in the external imbalance since 2008, when it had represented more than 10% of Spain's gross domestic product (GDP), this was still among the highest in the euro area in 2011, at 3.9% of GDP. The high energy deficit, close to 4% of GDP last year, is the main obstacle to adjusting the current deficit. Cutting the energy bill is therefore one of the main challenges facing our economy, particularly given the prospect of energy prices remaining relatively high. Increased efficiency and a domestically sourced energy supply are the main ways to progress towards this goal. The question is how much can the energy deficit improve.

Spain's costly energy bill is largely due to two factors: the low amount of domestic energy production and the economy's energy efficiency level. Regarding the former, the graph above shows how Spain's energy production only supplied 26.2% of the total energy consumed in the country in 2010. This proportion is a long way from the European Union's average of 47.2%.

This lower dependency in Europe is due to several reasons. In some countries, it can be explained by the existence of large energy fields. This is the case of the Netherlands and the United Kingdom, whose main sources of domestic energy in 2010 were natural gas and oil, respectively. In other countries, on the other hand, renewable energy sources (mainly hydraulic, solar, wind, geothermal and biofuels) and nuclear energy make up most of the domestic energy produced. In France, 41.2% of the energy consumed that same year came from its own nuclear power plants, while in Austria the intense use of renewable sources supplied 24.8% of the country's energy consumption. In Sweden, both energy sources generated 63.0% of the total energy consumed.

With regard to Spain, nuclear energy and renewable sources generated, respectively, 47.0% and 43.0% of the country's energy production, while solid fuels contributed an additional 9%. Undoubtedly, of note is the increase in the relative weight of renewable energy, which in 2010 already produced 11.4% of the total energy consumed compared with the figure of 5.4%, recorded in 2002.

In spite of this good performance by the renewable energy industry, the significant weight of oil and natural gas in Spain's total energy consumption keeps the country's external energy dependence high. In fact, imports of both products accounted for around 70% of the energy consumed at the end of 2010, a figure that is 20 percentage points higher than the European average. This exposes the Spanish economy to the acute volatility of energy prices. A clear example was the hike in oil prices early in 2008, which pushed the energy deficit for the first quarter of that year up to 4.7% of GDP quarter-on-quarter, 1.6 percentage points higher than the figure recorded half a year earlier. Moreover, these imports come from a small number of countries that are very unstable politically. 67.3% of Spain's oil imports and 79.1% of its gas comes from countries in the Middle East or North Africa, suggesting that this volatility is unlikely to lessen in the medium term.

The need to reduce the country's external energy dependence is therefore clear. The objective contained in Spain's National Action Plan for Renewable Energies (PANER in Spanish) is along these lines, aiming to increase the energy produced via renewable sources to 17.9% of the primary energy consumed in the country by 2020. Should this target be met, and should the coverage provided by the rest of the energy sources remain stable, Spain's domestic energy production will continue to grow until it reaches almost 33% of final consumption. In fact, if it had reached this level in 2010, energy imports would have been 7.0% lower, which would have reduced the energy deficit by 0.3 percentage points to 3.1% of GDP. A significant decrease but perhaps not enough to reduce the pressure on the current account deficit. If more extensive measures were taken and Spain's domestic energy production reached a level similar to the European Union as a whole, its energy deficit could fall by approximately 1 percentage point to 2.4% of GDP.

In addition to increasing domestic energy production, a second factor that would help to correct the energy deficit is the economy's improved energy efficiency. If we take as a reference the energy consumed per unit of Spanish GDP, also known as the energy intensity index, we can see a significant fall as from 2005 (in other words, an improvement in efficiency). As can be seen in the graph above, this helped Spain to come close to the efficiency levels posted by the countries in the euro area as a whole. In 2010, Spain's energy intensity was only 4.9% higher than that of the euro area, compared with 14.0% in 2007. This narrowing of the efficiency gap can be put down to two factors: firstly, the greater sensitivity of Spanish energy consumption to decreases in GDP means that energy consumption fell more sharply than in the rest of Europe. Secondly, the increase in the weight of renewable energy in the composition of Spain's energy consumption, encouraged partly by significant subsidies, has also helped to improve efficiency. This is due to these sources producing electricity more efficiently than the other kinds of technology employed.

Continuing with the previous calculation, the potential effect of converging towards the efficiency level of the rest of the countries in the euro area would cut an additional 2 percentage point from the energy deficit relative to GDP. This, together with a similar domestic energy supply to Europe, would place the energy balance at 2.2% of GDP, a level close to the average imbalance recorded by European countries as a whole.

In short, the margin to correct Spain's high energy bill is wide. However, to achieve this objective, the country needs to implement additional reforms to bring efficiency and domestic energy production to similar levels as those in Europe. The progress made by Spain in both directions over the last few years show the path that must be taken but, without doubt, there is still a long way to go to lower its external dependency. 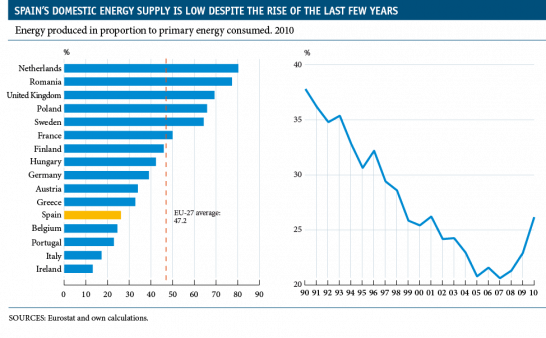 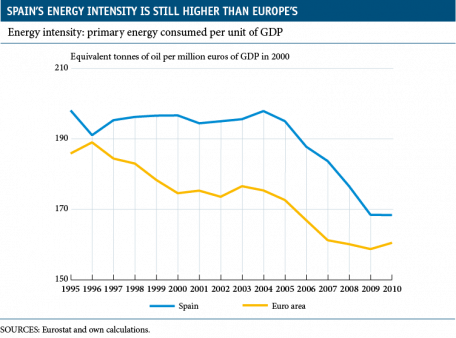