The Italian economic outlook has deteriorated considerably in recent months. This is largely due to the tensions generated by the Italian Coalition Government’s programme in the financial markets and with Brussels. Specifically, the cabinet hopes to stimulate the economy with a fiscal expansion, but this plan raises doubts about the sustainability of Italy’s public finances and has tightened the country’s financial conditions. In this Focus, we analyse the negative impact that a tightening of financial conditions could have on the Italian economy and whether this impact could offset the positive effect on GDP of the fiscal stimulus.

Indeed, as the first chart shows, since the Italian general election that took place last March, interest rates on Italian sovereign debt have risen considerably. For example, the interest rate on the 10-year bond has gone from 1.9% to 3.2% in just nine months. In addition, tensions in the financial markets and the deterioration of the outlook for the public finances have led the credit rating agencies to downgrade Italy’s credit rating.1

These events could have important implications for the Italian economy. First of all, a significant and sustained increase in sovereign bond interest rates will inevitably lead to a higher cost of financing public debt, forcing Italy to allocate more resources to the payment of interest on debt and limiting its fiscal capacity to cope with adverse shocks in the future. We expect this impact to be minor in the short term (given that the average maturity of Italian debt is relatively high, at 6.9 years). However, our estimates indicate that a permanent increase in the interest rate of the 10-year bond to 3.5% would cause the debt ratio to rise from 2021 on, if the primary surplus (which excludes interest payments) were to remain at around 1.5% (i.e. only slightly below its current level) and with a nominal GDP growth of approximately 2.5%.

Secondly, a tightening of the financing costs for the public sector usually entails a deterioration of the financing conditions of companies in the market. Indeed, as the second and third charts show, since last March, interest rates on (senior) corporate bonds issued by Italy’s largest non-financial companies have increased by between 30 and 190 bps, while the rates on bonds issued by the country’s major banks have increased by 133 bps (on average, for bonds that generally have a five-year maturity period). In this context, a higher cost of financing for banks usually results in an increase of interest rates on loans and lower availability of credit to the private sector. This, in turn, affects companies’ and households’ spending decisions.

Likewise, tensions in the Italian sovereign debt market could lead to a weakening of Italian banks’ and other financial institutions’ balance sheets, with consequences for their capital position. In particular, these entities (on average) have a high exposure to domestic sovereign debt – 10% of their assets are made up of sovereign bonds issued by the Italian Government –,2 and they are required to reflect any change in these bonds’ market value in their capital.3 Therefore, when sovereign bond yields increase significantly (i.e. a sharp fall in bond prices), these institutions may see their capital eroded through the negative adjustments in the valuation of these bonds. In fact, the ECB estimates that in Q2 2018 alone, the revaluation of sovereign bonds had a significant negative impact (of between 25 and 84 bps) on CET1 capital ratios4 – the primary measure of financial solvency used by the banking regulator5 – of the main Italian banks.

For the moment, however, the impact on the supply of bank lending has not been visible. As such, new bank lending and interest rates, both to businesses and to households, remain at levels similar to those of April.6 Furthermore, in the last ECB bank lending survey,7 Italian financial institutions did not report any significant changes in the conditions of financing provided to companies and households, although they did point out that the cost of financing and balance sheet restrictions had gained prominence as factors that could contribute to a tightening of lending criteria. The lesser impact on bank lending may be due to the fact that the pass-through is slower than on previous occasions,8 that banks are now better capitalised,9 and that there is abundant liquidity in the market. This liquidity, in particular, allows banks to access other less costly sources of financing, such as the ECB’s targeted longer-term refinancing operations (TLTROs), while also making other traditional sources of financing cheaper, such as deposits.10

However, if tensions persist, the negative impact of the tighter financial conditions on bank lending (and, therefore, on consumption and investment decisions) will become more evident. In addition, a continued weakening of capital positions would force Italian banks to find alternative ways to strengthen their solvency, for instance by reducing the risk of their assets, by reducing lending, or by going to the market to raise capital – but to do this, the conditions in the equity market need to be favourable.

In this context, it is worth asking what effect can the tightening of financial conditions have on the aggregate economic activity. To address this question, we estimated the impact of a shock to the risk premium of a 10-year Italian bond on the economy’s real growth, on the basis of the historical relationship between the two variables.11 Our estimates suggest that a 100-bp increase in the 10-year sovereign bond yield over a four-quarter period could reduce annual real GDP growth by 0.47 pps. This implies that the increase in rates observed since Q2 2018 may have had a detrimental impact on growth in the second half of 2018 and could continue to weigh on growth in 2019.

On the other hand, the fiscal expansion envisaged by the Italian Government amounts to 0.9 pps of GDP.12 Since several estimates place Italy’s fiscal multiplier13 between 0.5 and 0.8, the fiscal boost could have a positive impact on GDP of 0.5 pps in 2019. However, this effect depends on the specific measures that are implemented14 and it also relies on maintaining investor confidence (otherwise, private investment could be reduced beyond what the rise in the cost of capital would suggest). Therefore, in net terms, if the tightening of financial conditions were to persist, any expansionary effect that fiscal policy might have on the economy will be easily diluted and could even cause a growth slowdown in 2019.

3. In particular, changes in the (fair) value of financial instruments that are classified as «Available-for-sale financial assets» must be recognised directly in the company’s equity.

4. The Common Equity Tier 1 capital ratio is calculated by dividing the highest-quality capital (composed primarily of shares and reserves) by the risk-weighted assets.

8. See, for example, U. Albertazzi et al. (2014), «The impact of the sovereign debt crisis on the activity of Italian banks», where it is estimated that a 100-bp increase in Italy’s risk premium usually translates, after three or four months, into a 20-bp rise in bank interest rates.

9. At the end of 2014, the average CET1 capital ratio for the sector stood at 11.7%, versus 13.9% at the end of Q2 2018. The better capitalisation makes the banks less susceptible to increases in financing costs and to changes in the value of sovereign bonds.

10. The main source of financing for Italian banks remain residents’ deposits – which represent approximately 63% of the banks’ total financing – and these, for the time being, continue to grow at a healthy rate (3% year-on-year).

11. In particular, the relationships are modelled using a VAR formula, using data covering the period between 2000 and 2018.

12. According to the deterioration of the structural balance – the budgetary balance adjusted for the business cycle, one-off factors and other temporary measures – foreseen in the budget plan sent to Brussels on 13 November 2018.

13. The increase in GDP as a result of fiscal expansion.

14. In mid-December, the Italian cabinet revised its deficit target for 2019 downwards. The specific measures that are to be implemented and the size of the fiscal expansion remain to be seen. 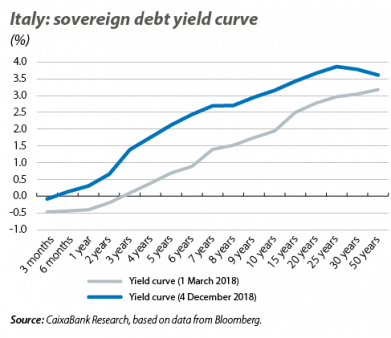 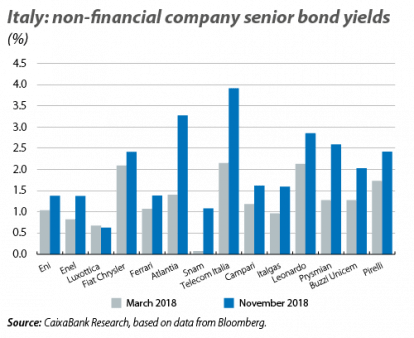 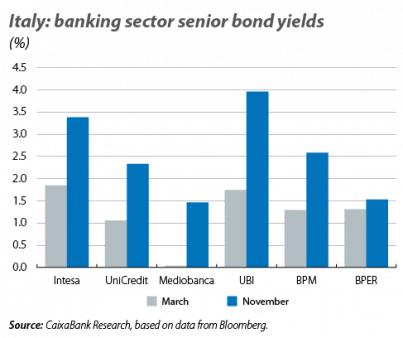