Latin America - paying the price of US protectionism?

One of the slogans for the US’s new policy is «America First». When it comes to international trade, this has become an explicit plan to reduce what the US administration considers to be excessive trade deficits. In order to achieve this, the US has decided to review its policy of multilateral trade agreements. For instance, August saw the start of negotiations to revise the North American Free Trade Agreement (NAFTA). The country may also unilaterally impose duties on imports from certain countries (such as the recent case with aircraft from Canada). CaixaBank Research’s main scenario expects the NAFTA negotiations to be constructive, resulting in a partial and more conservative rebalancing of US relations with Mexico (and Canada), as well as achieving some kind of conciliation with China and Europe. However, it is important to examine the consequences of a potentially more protectionist revisionism for Latin America. The US is a major trading partner in the region, being the first or second export market for most LatAm countries.

On studying the data we can see that, firstly, the US trade imbalance with the region is concentrated. The US only has trade deficits with Mexico, Venezuela, Nicaragua, Ecuador, Colombia and Bolivia. And this deficit is large solely in the case of Mexico and, at some distance, Venezuela. It is also relevant that direct trade exposure is only very high in Mexico: 82% of Mexican exports
go to the US, accounting for 29% of its GDP. At some distance come the countries of Central America while, in the rest of the region, the share of US exports is notably lower and less than 6% of GDP in all cases.

Although there is little direct exposure, could Latin American economies be indirectly affected by the US becoming more protectionist (i.e. through the channel of trade with other, third party countries)? The data suggest that, with regard to intraregional flows, this is only in the case of Central American countries, where around 20% of their total exports go to Mexico and other Central American countries and they are therefore indirectly exposed to the US.

Neither does this indirect channel appear to be particularly important for other geographical destinations outside the region. Some countries have very close trade relations with China (which generates almost half the US trade deficit on its own) and the EU (20% of the US trade deficit). This is the case of Chile, whose total exports to China and the EU account for 10% of its GDP. However, a protectionist shift in the US would have to end up affecting Europe or China’s economic growth to have any marked impact on the Chilean economy. A scenario which, for the present, seems unlikely. 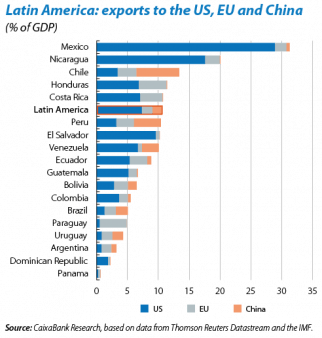 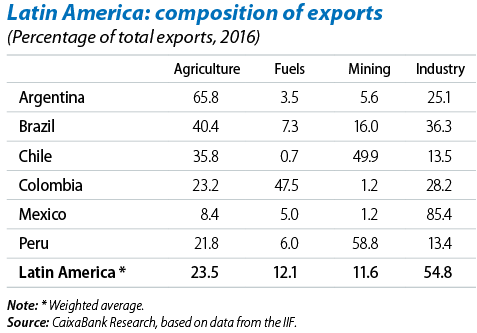