Over the last five years, correcting the public deficit has been one of the government's priorities for its economic policy. In spite of the economy's deterioration, efforts made in the area of fiscal consolidation managed to reduce the deficit by 4.5 p.p. between 2009 and 2013, down to 6.6% of GDP. In the coming years, this process will be boosted by the improved economic situation. However, the still high levels of public deficit and debt (the latter reached 93.9% of GDP in 2013) require renewed efforts to ensure the sustainability of the public accounts and make the adjustment process more credible. The new Stability Programme contains the main tools that will be used by the government to achieve this.

One initial aspect to be considered is how much the government plans to reduce the public deficit over the next few years. Taking 2014 as our benchmark, the Stability Programme's figures contain a 1.1 p.p. reduction in the fiscal imbalance to 5.5% of GDP. This adjustment is 0.3 p.p. bigger than the one contained in the previous Stability Programme due to a larger correction in the deficit's cyclical component (which occurs when the economy is not performing at 100%). Lower expenditure on unemployment benefit and increased VAT revenue are clear examples of this effect. The forecast for the structural deficit (what would be observed if the economy were performing at 100%) has remained unchanged.1

According to the new programme's figures, fiscal consolidation will continue to focus on adjusting the cyclical balance over the next few years, at an almost constant rate of contraction of 0.9 p.p. every year between 2015 and 2017. Nonetheless, the adjustment of the structural balance, which will decrease at a rate of 0.5 p.p. per year, will still be considerable. With all this, a structural surplus of 0.1% would be achieved by 2017, three years in advance of the target equilibrium level for the structural balance established by the Organic Law on Budget Stability.

The government's fiscal strategy over the coming years represents a clear shift in orientation from the adjustment measures already adopted: while in 2012 and 2013 fiscal adjustment was spread more or less evenly between revenue and expenditure policies, in the coming years it has a clear bias towards expenditure, representing 70% of the impact of all the measures planned.

This shift in focus will significantly reduce public spending in relation to GDP, from 44.4% in 2013 to 40.1% in 2017. Unlike the situation over the last few years, according to the Stability Programme the main support for this reduction will be contained public wages and intermediate consumption (reducing their relative share as a percentage of GDP by 2.8 p.p.). The government's recently approved Public Administration Reform will certainly play a key role in this reduction. Another factor to bear in mind is the fall in spending on social benefits (1.2 p.p. of GDP) due particularly to the expected drop in unemployment benefit payouts as a result of the improved labour market. On the other hand, investment expenditure, among the hardest hit by adjustment policies over the last few years, will stop decreasing, remaining at 1.5% of GDP (although still far from the 4.0% of GDP seen in 2010).

In short, the new Stability Programme has outlined a path for adjustment that, if followed, will reinforce the credibility of the fiscal consolidation process without harming economic growth. However, the government will need to continue concentrating all its efforts to ensure this is achieved.

1. For a detailed discussion of the problems of measuring the structural deficit, see «Output gap, GPS and other fallible guides» from IM05 2013. 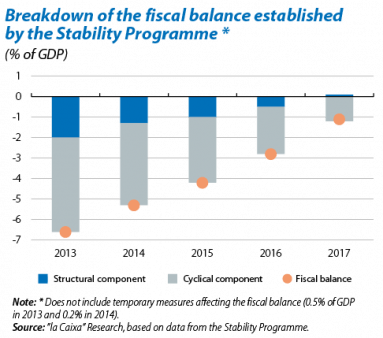 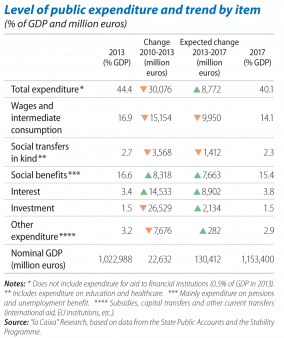