2014 is looming and, as has become the norm over the last few years, people are starting to look at the targets set by economic policy for the coming year. On this occasion, Spain will start a new year with a good wind behind it. Tension in the sovereign debt markets has eased considerably and the economic recovery appears to be on track. This improvement is partly due to the reforming efforts made by the government over the last few years. In 2013, progress has been made in restructuring the banking system, pension reform has been completed and new measures have been adopted for fiscal consolidation and to boost competitiveness. There is still a long way to go, however.

In fact, the commitments undertaken with the European Commission for 2014 require numerous structural reforms. Among these we find the following: new rules to complement the labour reform passed in 2012; further reform of the electricity industry to ensure its financial viability; the liberalisation of the railway industry; approval of the Act to Guarantee Market Unity and reform of the Spanish tax system.(1) Also of note is the reform of public administrations which, according to the schedule agreed with the European Commission, will be passed at the beginning of 2014. This must help to reduce public spending by improving efficiency.

Approving this reform should help to sustain the pace of fiscal consolidation of the last few years. Between 2009 and 2012, adjustment measures helped to correct the public deficit by 4.3 percentage points down to 6.9% of GDP (without counting losses associated with the bank bail-out). This adjustment is particularly significant given the added difficulty posed by the decline in economic activity over the last few years.

In part, this process of fiscal consolidation has been carried out by increasing tax revenue. In fact, if measures had not been taken to boost revenue, income would have remained at around 35% of GDP and would have therefore actually fallen by about 1.9% in nominal terms.(2)

However, this was not the case. During that three-year period, public revenue rose slightly to 37.1% of GDP, a result of the tax measures approved in the last few years (a VAT hike, elimination of certain deductions in corporation tax, introduction of new excise duties and increase in property rates, among others).

In addition to the increase in revenue, the public deficit has also been corrected by taking measures to contain public spending. In spite of the effect of the deterioration in the economic cycle on some items, such as unemployment benefit or debt interest payments, the government estimates that public spending will have been cut by 1.7 percentage points between 2009 and 2013 (without counting the costs associated with the bank bail-out). If we exclude from our analysis those expenditure items most affected by the economic cycle and restrict our analysis to the more discretional items of expenditure, this adjustment in spending rises to 5.1% of GDP. As can be seen in the graph, a large part of this adjustment is due to the drop in public investment, accounting for 62.3% of the adjustment, followed by the correction in intermediate consumption and salary payments, which account for 19.8%. The reduction in social expenditure is 8.2%. The rest of the items (mainly subsidies and other current transfers) account for the remaining 9.7%.

This strategy for adjusting Spain's public expenditure differs significantly from that observed in those euro area countries that have had to resort to a bail-out: namely Ireland, Greece and Portugal. In these three countries, the reduction in salaries and intermediate consumption represented the largest measure implemented to correct public spending. Specifically, this heading accounted for almost half the adjustment in public expenditure. On the other hand, although the reduction in investment in bailed-out countries has also been significant, its affect on the correction in public spending has been less than in Spain's case. With regard to social expenditure, however, we can see that this has played a very similar role in the composition of the adjustment for all four countries.

Implementing public administration reforms might lead to a significant change in the pattern of public spending in Spain. Last June, the Commission for Public Administration Reform (CORA in Spanish) presented an exhaustive report with a total of 218 proposals aimed at improving efficiency at all levels of the public sector. Among these initiatives are those aimed at reducing bureaucracy; eliminating or merging public bodies; taking advantage of economies of scale (for example by centralising the purchase of goods that reduce costs); restructuring and making public employment more flexible and eliminating overlaps between administrations. Some of these measures are likely to start being implemented this December, with the approval of the Rationalisation and Sustainability Act. This report estimates that the implementation of all these measures would lead to savings in public expenditure of 17,543 million euros between 2013 and 2015. This figure is approximately equivalent to 40% of the adjustment in the deficit planned for these three years.

In short, public administration reform looks like being one of the key measures for 2014. Providing it is designed well, this reform will facilitate fiscal consolidation as well as laying the foundations for a more efficient public sector: two elements that will help to dispel doubts regarding the solvency of public accounts and the economy's capacity to grow. Consequently, the reforming spirit must not wane.

(1) For more information on the reforms pending approval in the coming quarters, see the Economic Partnership Programme of Spain sent to the European Commission last November.

(2) Estimate based on the past elasticity of tax revenue to nominal GDP of 1.1. 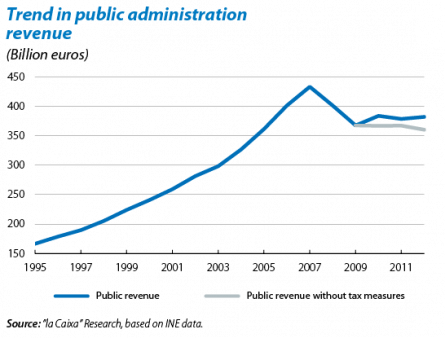 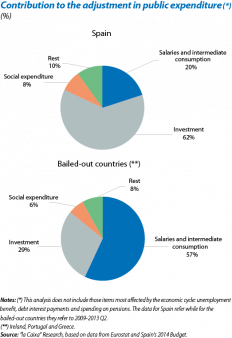