The banking sector after the crisis: more robust and stable?

The response of economic policy to the financial and real crisis over the last few years has brought in tougher financial regulation and a series of strongly expansionary monetary measures. Monetary policy that is too accommodative, however, could sow the seed for future banking crises (as happened in the first decade of the millennium), as interest rates that are too low for too long could encourage investors to take on too much risk and cause a new cycle of excessive debt. In spite of this concern, however, we must remember that, in the last few years and as a result of the global financial crisis in 2008, the regulatory framework for banks has been strengthened precisely with the aim of making the sector more robust and more able to withstand shocks. In particular the reformulation of the capital framework known as Basel III and the creation of banking union in the euro area have helped to progress towards these goals. It would be naive, however, to think that the banking system is now immune to the risk of future crises.

Basel III has increased banks' capital requirements as well as the quality of this capital, also introducing liquidity requirements to ensure banks can handle adverse scenarios. At the same time, banking union has also had a number of effects on the sector. Bank supervision has increased considerably, as well as widening the focus of this supervision (now including, for example, the sustainability of the business model), while a common resolution mechanism has been set up to take swift action with banks in difficulty and minimise the use of public resources (bail-outs). There have also been reforms aimed at strengthening the corporate governance of banks.

However, these higher capital and liquidity requirements also put pressure on the sector's profitability. Apart from increased requirements there is also the high regulatory uncertainty still affecting some crucial issues which could end up involving further additional requirements to those already in place, such as the review of how risk-weighted assets (RWAs) are calculated. Another source of pressure on bank profitability comes from the resolution framework implemented. One of the cornerstones of this framework, internal recapitalisation or bail-in, requires banks to comply, by the end of 2016, with a minimum requirement for equity and permitted liabilities (the TLAC ratio or total loss absorbency capacity, for global systemic banks, and the MREL ratio or minimum required eligible liabilities). This new requirement means that banks will have to issue more and relatively expensive liabilities (also known as «bail-inables»). In general, all these measures increase banks' financing and intermediation costs.1

Very low and even negative interest rates have increased this pressure on bank profits even further. This happens because interest rates on loans tend to fall in line with monetary market interest rates (with the Euribor) while the cost of the main source of bank financing, minority deposits, resists any cuts as it is difficult to pass on negative interest rates to depositors. In addition to this environment of low interest rates, bank profitability has also been affected over the last few years by weak growth in business volumes resulting from the deleveraging carried out by the private sector (households and companies) as well as the weakness of the economic recovery.

Poor banking returns are not sustainable; partly because this hinders the organic generation of bank capital (via retained earnings) and makes it difficult to attract new capital, necessary to continue issuing financing. This is a risk which, in highly bank-oriented economies such as Europe where the banking sector plays a vital role in the transmission of monetary policy, could end up affecting economic growth and financial stability. In such a context of low structural profitability some banks may also be inclined to develop excessively aggressive strategies in order to achieve larger scale advantages or may take greater risks to increase their profits. Insofar as the weighting of assets by risk is not an entirely accurate reflection of the actual risk of assets, it is not easy to detect such strategies which, ultimately, also attempt to prevent society from becoming involved in optimum consolidation processes (regulation itself, which penalises larger banks in order to lessen the problems associated with institutions that are «too big to fail», also come into contradiction with this need for greater consolidation).

The intensification of banking regulations also tends to encourage a deviation of intermediation activity towards sectors with little regulation, such as the so-called «shadow banking» (institutions carrying out financial activities of a banking nature). These sectors could be a possible source of financial instability and systemic risks (see the article «Alternative channels to banking: the new challenge for financial stability» in this Dossier).

Last but by no means least, we should also note that the Basel III regulations do not eliminate banks' tendency towards procyclicality. This means that, in downward phases of the cycle when the economic activity and creditworthiness of borrowers worsens, RWAs increase (and affect capital ratios). This happens because the models used to calculate RWAs are based, among other parameters, on the probability of loan default and this probability tends to increase when economic activity worsens. This procyclicality in RWAs therefore exaggerates both the upward and downward phases of the cycle, distorting the capacity of banks to offer credit to the real economy. Nonetheless it should be noted that Basel III, as part of the so-called macroprudential policies, introduces buffers of additional capital such as the countercyclical capital buffer and the systemic risk buffer whose aim is precisely to ease the credit cycle. In any case, and given the limited experience in applying this kind of macroprudential measure, we will have to wait and see whether they are truly effective.

In short, the reinforcement of the regulatory framework carried out over the last few years as a result of the global financial crisis has made the banking sector more robust. But pressure on profitability due to this new framework, weak business volumes and all-time low interest rates mean that we must still keep a close eye on the risk of a possible crisis. Experience has shown us that any well-meaning reform usually has undesired effects. And future crises tend to be quite different from past ones.

1. One of the factors contributing to increased volatility in the period of stress suffered by banks at the beginning of 2016 was the uncertainty regarding the possibility of some European banks reaching the threshold to suspend payment of coupons on contingent convertible bonds (CoCos), setting off a chain reaction involving other bank liability instruments and affecting banks in other countries. 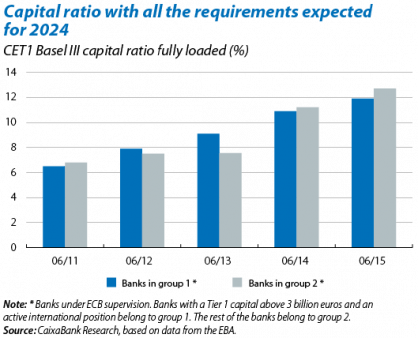