In addition to China’s high level of corporate debt, another factor fuelling concerns about the country’s financial stability is the role played by shadow banking activities.1

There is a great deal of uncertainty about the real size of shadow banking in China since official statistics fail to provide any direct estimate. Moody’s estimates the sector at 58.3 trillion yuan in June 2016 (27.5% of all bank assets in the formal banking system).2 This number represents 80% of Chinese GDP but is not especially large per se as it is far below the US, where it amounts to 150% of GDP. The real cause for concern comes from the recent surge observed in shadow banking activities. According to the Financial Stability Board, China’s shadow banking has grown by more than 30% per year over the last three years compared with 10% growth in the rest of the world.

If we analyse the composition of China’s shadow banking, the large amount of wealth management products (WMP) stands out with a 44% share of the total, doubling in volume since 2014.3 WMPs are generally short-term savings products that offer high returns and often invest in risky assets. Given the tendency to assume excessive risks with these products, Chinese regulatory authorities have recently forced financial institutions with less than 5 billion yuan of net capital to invest the proceeds from any WMP they issue in less risky assets, such as government bonds. In second place come entrusted loans, namely loans between companies, which make up 21% of shadow banking. These are not seen as bank loans and have largely been used to channel credit at high interest rates (and high risk), although in this case shadow banking is merely acting as an intermediary for such transactions and therefore assumes no risk, at least not directly. Trust loans make up 10% of the total, which are loans offered by financial institutions in the informal banking system.

In theory, this expansion of shadow banking could be positive if it helps to diversify financial risks. This has not been the case in China, however, where shadow banking has been channelled towards high-risk financial vehicles and practices, often involving the formal banking system. For instance, 15% of WMPs have been bought by traditional banks in the interbank market. This percentage was just 3% at year-end 2014. Another source of concern is that a lot of traditional banks have used shadow banking to reclassify their loans, in many cases bad debt, as other financial products requiring far fewer provisions. As these reclassified loans actually involve a high risk not covered by adequate provisions, and in most cases banks have not managed to transfer the risk, such practices could create significant strains in the financial system. Bloomberg estimates that these «shadow loans» represented 15% of GDP in June 2016. Such malpractice is particularly prevalent in small and medium-sized regional banks, hence the recent intervention by Chinese regulators to limit their exposure to WMPs.

1. Shadow banking refers to the financial institutions, infrastructure and practices that support financial activity outside the supervision of the regulatory authorities.

2. Other, more conservative estimates by The Economist place this at 40 trillion yuan.

3. See the Focus «China’s financial system: a giant with feet of clay?» in MR11/2016 for more details on wealth management products (WMP). 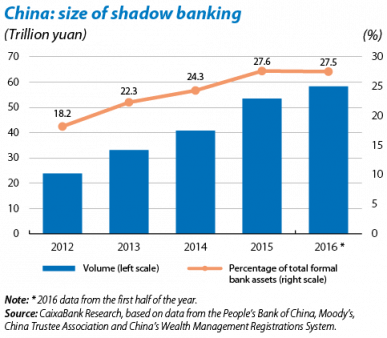 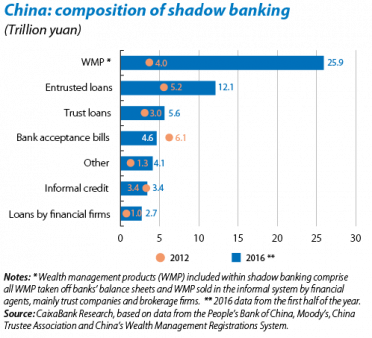