The European Central Bank (ECB) delegates part of the implementation of its functions to national central banks (NCB), such as processing transactions between commercial banks in different countries. During the crisis the system used by NCB to manage these transactions, called TARGET2,1 provided one of the signs of imbalances in the euro area between the core and periphery. Here we explain how this system works.

As long as international trade generates transfers between commercial banks, the TARGET2 balance for each country should relate to its international trade. For example, when a country's imports from the rest of the euro area exceed its exports, citizens must carry out net payments. However, between 2000 and 2008 the periphery of the euro area had a current account deficit in its balance of payments although its TARGET2 obligations were not quantitatively significant (see the graph). The reason is because the financing of this current account deficit came from the banks in Europe's core. In other words, going back to our previous example, Juan's transfer of 100 euros to Hans came from a loan that Juan had previously requested from a German bank. So the flow of the transfer from Juan to Hans was offset by the flow of the loan from the German bank to Juan: overall, the transaction produced no TARGET2 balances. However, after the interbank market was frozen due to the outbreak of the crisis, Juan could only finance the transfer with a loan obtained by his commercial bank from the Bank of Spain. Consequently, without any compensatory flow from Germany, the Bank of Spain took on a TARGET2 liability and the Bundesbank received a TARGET2 claim. So TARGET2 balances can point to current account imbalances when these are financed by ECB liquidity (channelled through NCB). Or, in other words, they indicate each euro area country's need for ECB liquidity. As we have seen in a previous Focus,2 the periphery requests most of the liquidity provided by the ECB while the core mainly stores this liquidity. Similarly, the trend in TARGET2 balances underlines the periphery's need for liquidity (which is translated into an increase in TARGET2 liabilities) while this is in ample supply in the core (whose deposits with the ECB are reflected in the TARGET2 claims accumulated).

However, there are elements that «contaminate» the information provided by TARGET2 balances. One of these is the geographical organisation of a commercial bank: for example, when a bank that belongs to a German head company decides to obtain funding via its subsidiary in Italy (i.e. via the Bank of Italy) and redistribute this liquidity towards its parent bank, TARGET2 balances are produced which do not actually reflect the countries' different liquidity requirements. Another factor is that banks outside the euro area, such as those in the City of London, operate with TARGET2 through European NCB so their transactions also distort the information provided by TARGET2 balances. Lastly, we should also remember that not all transactions are carried out through the TARGET2 system.3

In conclusion, although under normal circumstances the balances in the TARGET2 balance are a natural product of international trade, when the interbank market was frozen they reflected the substitution of private financing with that provided by the ECB and thereby the different liquidity needs of the core and periphery. Their persistence shows that there are still financial imbalances to be corrected.

3. Although TARGET2 handles a large proportion of them: in 2015, it recorded transactions totalling 469.8 trillion euros, 45 times the GDP of the euro area. 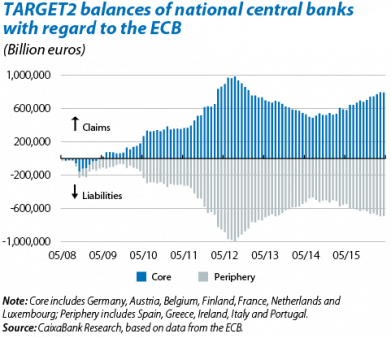