Brexit and the adjustment in the real estate sector: a dangerous cocktail

The UK is going through a delicate moment. Against the backdrop of elevated uncertainty due to Brexit, recent data suggesting that the real estate sector is cooling down raise concerns (see the chart). Indeed, a slump in house prices is a risk to the economy. On the one hand, those sectors that would be hardest hit, namely construction and real estate services, account for around 19% of GDP. On the other, housing is one of the assets most widely used as collateral for credit, so a drop in property prices reduces the capacity of households and companies to access debt and would therefore push down consumption and investment. While the housing market is generally on the up in Europe (for more information see Focus «The European real estate markets: from recovery to boom» in this Monthly Report), the change in trend in the UK’s real estate sector is mainly due to two specific factors.

In chronological order, the first factor was the modification made to the country’s Stamp Duty Land Tax (SDLT). This is proportional to the property’s value and is only applied to real estate worth more than GBP 125,000. At the end of 2015, the government increased SDLT by 3 pp for second house purchases and buy-to-let properties, coming into effect as from April 2016. Because of this, the real estate market cooled down after reaching a peak of activity just before the new law came into force.1

The other important factor is, of course, Brexit. The pound has fallen substantially since the referendum. As the impact of this depreciation has been passed on to the price chain, it has pushed up inflation and thereby reduced households’ purchasing power, consequently lowering demand in the real estate sector. There has also been less growth in investment, both by the British themselves and also by international investors, due to the Brexit related uncertainty.

Given that we expect this Brexit-induced economic slowdown in the UK to be limited, the degree to which the real estate sector will cool down should also be contained. First, because although the positions taken up by the UK and the EU may seem to be far apart at the moment, the most likely scenario is for negotiations to result in a Brexit that will allow the UK to maintain reasonable access to the single market. Second, because UK’s banks are well capitalised and the Bank of England is very likely to maintain a highly accommodative stance, tightening monetary policy in a very gradual manner. Finally, the international context also helps, especially the EU’s economic recovery.

However, there is the possibility that house prices will adjust more substantially than expected. Household debt to income ratio is only second to Canada among the G-7 group of most developed countries, and the savings rate has dropped to an all-time low of 1.7%.2 If the economic slowdown were sharper than expected or the Bank of England was forced to raise interest rates more aggressively than planned (due to inflation picking up), households would have little room to manoeuvre. The increase in buy-to-let mortgages is another risk factor. These have gone from accounting for 8.5% of all mortgages in 2007 to 15.6% in Q1 2017. Since it is more sensitive to changes in the expected return on assets, this market segment could push house prices further down should the sector enter a recession.

1. According to data from HM Revenue & Customs, the average number of housing transactions between January 2014 and February 2016 was 102,000 properties per month. There were 170,000 transactions in March 2016. Since June this year, there has been an average of 97,000 transactions per month have been carried out. 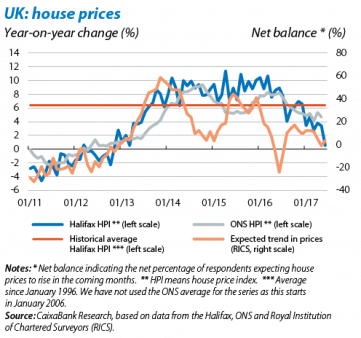