The consequences of Brexit on the real estate sector

Real estate has now embarked on a new upward cycle, as shown by the trend in house purchases with growth in double-digit figures for the past two years. Although domestic demand has been boosted by the upturn in employment and favourable financial conditions, foreign demand is also far from negligible: up by 14% in Q1 2017, cumulative over four quarters.

This positive situation for foreign demand conceals several different trends, however. On the one hand, most purchases are concentrated on the Mediterranean coast and islands, these locations accounting for over 30% of all purchases in some provinces (see the enclosed map).

On the other hand, the trend in house purchases varies widely by nationality. In this respect, the uncertainty regarding Brexit and the pound’s depreciation are having an effect on house purchases by citizens of the United Kingdom, the main foreign buyers of real estate in Spain. Purchases made by British citizens fell by 13% year-on-year in Q1 2017. Nevertheless, this drop is more than offset by the dynamism of purchases made by French, German, Belgian and Swedish citizens which, in Q1 2017, were rising at a rate of 20% year-on-year or more.1

The different trends observed among international buyers have altered each country’s relative share of total house purchases, as well as helping to reduce the degree of concentration of foreign buyers. Although the UK still leads the ranking of purchases by foreign citizens, it now accounts for just 15% of all foreign purchases in Q1 2017 compared with 21% in 2015.

Looking to the future, house purchases by British citizens may pick up again should the Brexit negotiations go well and the pound recover. However, any episodes of high uncertainty regarding Brexit, or a hard Brexit, could mar this recovery since, historically, house purchases by British citizens have been very sensitive to their country’s economic conditions. On a more positive note, the good economic outlook for the rest of the main countries that buy Spanish property, together with continuing accommodative monetary conditions and lower political uncertainty in the euro area countries, represent an opportunity for Spain’s real estate sector. 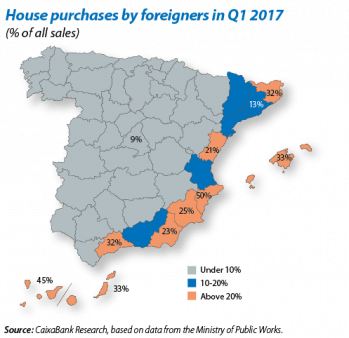 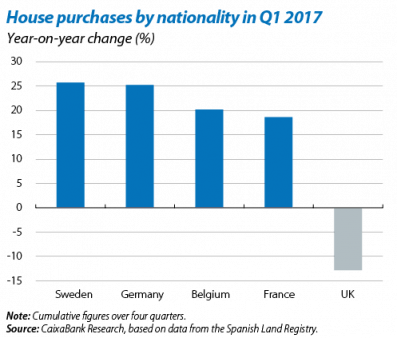 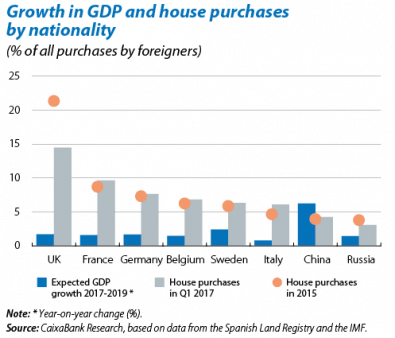