In June 2016, the United Kingdom’s vote in favour of leaving the European Union (EU) opened up a new scenario for the British economy that could have important repercussions for the Spanish economy and particularly for the tourism industry, which receives around 16 million British tourists a year1. In this article we examine the impact of Brexit on the number of British tourists visiting Spain and its potential impact in the future under different EU exit scenarios. 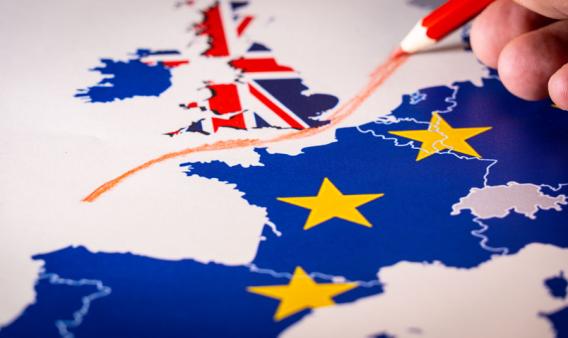 Three years after the referendum, it is still unclear when and under what terms the UK will leave the EU. It is also true that, after an initial adverse reaction in the financial markets, the British economy has performed better than expected2. However, this does not mean that the confusion caused by Brexit has no economic consequences.

In fact, some of the effects of Brexit can already be seen, such as a slowdown in the UK’s economic growth rate since the referendum (from 2.4% in 2015 to 1.4% in 2018). This loss of dynamism has been caused, in part, by the decline in real income due to the sharp depreciation of the pound sterling occurring after the Brexit referendum. This has directly reduced the purchasing power of the British, both in terms of their domestic purchases and also when they travel abroad. In this respect, as the first chart shows, it is not surprising that the tourism demand by UK residents has diminished since mid-2016.

A drop in tourism demand 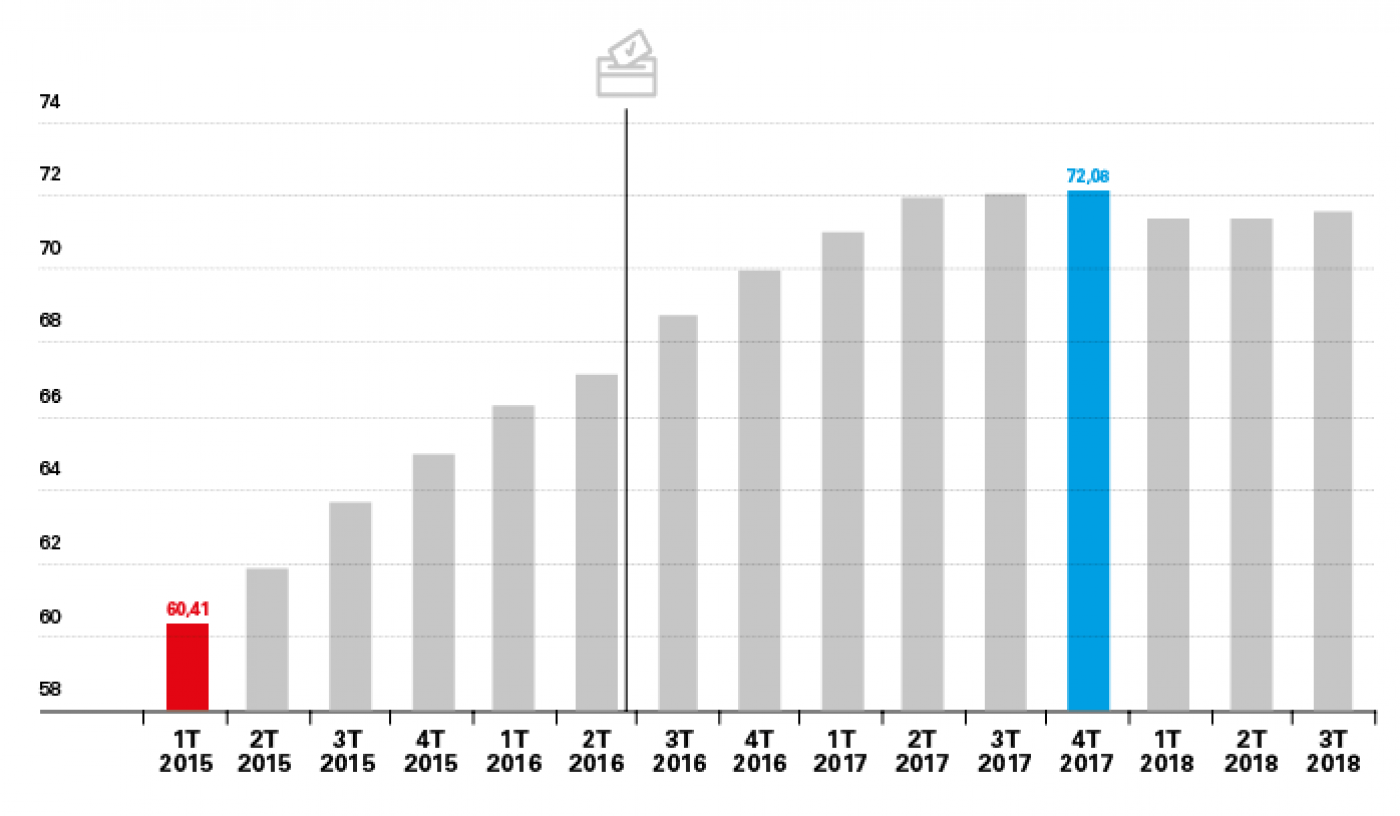 Note: The vertical line marks the date of the referendum on the UK’s exit from the EU (23 June 2016). Source: CaixaBank Research.

Given this situation, we might wonder how British tourism demand would have fared without the Brexit effect. To find out, we used the trend in tourist demand in Ireland, which behaved very similarly to the UK trend until mid-2016 (see the second chart). If UK tourist numbers had continued to perform in a similar way to those from Ireland after the Brexit referendum, up to 5 million more UK residents would have travelled abroad between Q3 2016 and Q3 2018. For Spain, the most popular destination among the British, this estimate means that, since mid-2016, approximately 1.1 million British tourists have been lost (around 500,000 a year)3. However, it should be noted that UK visitor numbers for Spain have posted a positive trend over the past two years. In fact, Spain has managed to increase its market share (from 20% in Q2 2016 to 22% in 2018) as well as the daily expenditure per visit among the British, a sign that it is still a competitive market.

For the next few quarters, the outlook for the British economy in general and British tourism demand in particular will continue to depend on the Brexit developments and outcome. Ratification of an agreement would avoid a hard Brexit and help to dispel some uncertainty in the short term, although it would not guarantee that the current links between the EU and the UK would remain in the medium and long term. Specifically, a long process will begin post-Brexit during which both parties must define the details of their future relationship. At present, the UK’s position is unclear, a fact that makes it difficult to determine what the future relationship will be like and the implications for economic activity, among other areas.

Comparison of outbound tourism between Ireland and the United Kingdom 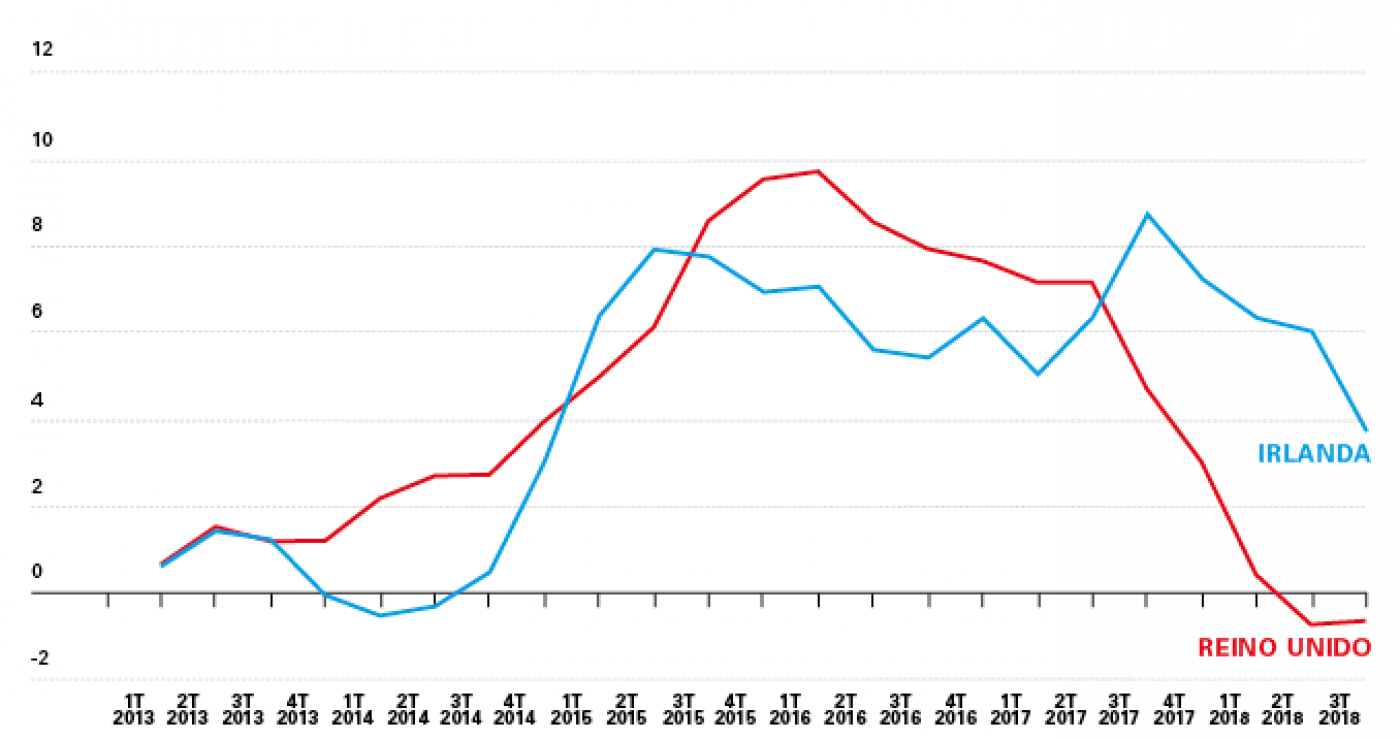 In this context, it may be useful to look at possible future scenarios and analyse their impact on Spain’s inbound tourism from the UK. To this end, we have used the range of scenarios developed by the Bank of England4, going from benign environments, where the links between the EU and the UK remain close, to more adverse ones such as a hard Brexit. With these scenarios, and based on our estimates of the elasticity of tourism demand in the United Kingdom (with respect to GDP and the exchange rate)5, we have passed the impact of Brexit onto the number of British tourists coming to Spain.

In the most favourable scenario, the United Kingdom would ratify the exit agreement negotiated with Brussels and a relatively long transition period would be implemented, during which both parties would negotiate as close a future relationship as possible (without any significant increase in trade barriers between the two). In this case, the Bank of England estimates that, thanks to the reduction in uncertainty, the impact on UK GDP could even be positive in the medium term (+1.75%)6 and that the pound sterling would appreciate by 5%. If this scenario occurs, we believe the impact on British tourism would be positive and that visits to Spain would increase by around 800,000 (4.9%), cumulative up to 2023.

At CaixaBank Research we have analysed four possible scenarios to estimate the future impact of Brexit on the number of British tourists coming to Spain, from the most benign to the most adverse

A second scenario, less favourable than the previous one, envisages a future trade relationship that is less close with the EU. Specifically, after the transition period, border controls and more regulatory barriers would be introduced, leading to a slight fall in GDP in the medium term (–0.75%). However, the reduction in uncertainty would push up the pound slightly (by 2%). In this case, our estimates indicate that the impact on the number of British tourists coming to Spain would be negligible: British visits would decrease by approximately 150,000 (1.0%) up to 2023.

The other two scenarios contemplate the possibility that the UK and EU will not reach an agreement and that trade between them will be governed by WTO terms (with tariffs and non-tariff barriers to trade and customs checks). Neither do these two scenarios rule out the possibility of some of the production chains currently in operation breaking down, or certain episodes of financial instability. Depending on the degree of disruption, the Bank of England estimates the impact on the UK’s GDP could range from −4.75% (less disruptive scenario)7 to −7.75% (highly disruptive or disorderly scenario)8. Both scenarios also assume a sharp depreciation of the pound (between 15% and 25%, depending on the severity of the scenario). Should any of these scenarios occur, we estimate the impact on British tourism outflows to Spain would be significant and negative, ranging from 13.8% to 22.7%, cumulative up to 2023.

Impact of Brexit on British tourist visits to Spain 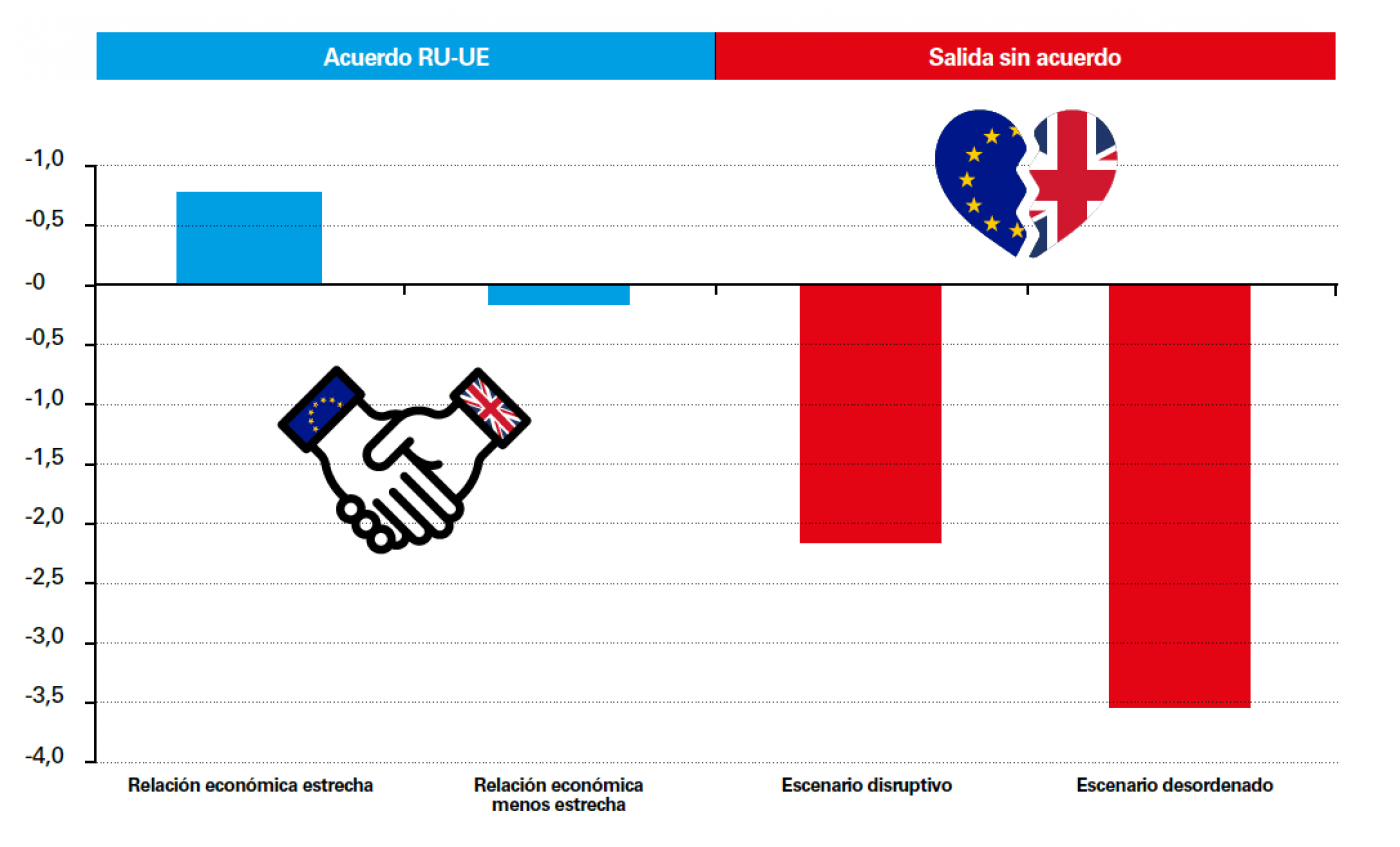 The impact of Brexit on the tourism sector will therefore largely depend on the type of commercial relationship established between the UK and the EU. However, the sensitivity of British tourism in each of these scenarios may be amplified or reduced depending on the institutional arrangements agreed, since they could make Europe’s tourism industry less competitive. One such important provision is the United Kingdom’s access to the European Common Aviation Area9, as without this prices for flights between the UK and continent are likely to increase (due to less competition). Also, if a soft Brexit is not achieved, particularly costly measures could be introduced for British tourists, such as the loss of free health coverage in the EU and restrictions on their movements (including border controls and visa requirements for travelling to the EU).

The impact of Brexit on Spain’s tourism industry will largely depend on the trade relations established between the UK and EU. In the short term, British tourism is likely to be less dynamic than in the years prior to the referendum

In summary, the estimated impact of Brexit on British tourism demand varies considerably depending on the scenario and hypotheses considered, illustrating the high degree of uncertainty surrounding the UK’s exit from the EU and its possible economic implications. In this respect, an agreement between both parties that minimises uncertainty and guarantees an orderly transition towards a new model of commercial relations without unnecessary barriers would succeed in mitigating a large part of this impact. However, over the next few months, Brexit confusion is likely to keep the rate of economic activity in the UK contained and the British pound volatile. In such a situation, British tourism is likely to continue suffering from the effects of Brexit and be less dynamic than in the years prior to the referendum.