Spain's 2016 Budget, presented by the government to Parliament last July, includes an improvement in the macroeconomic situation of the Spanish economy with 3.3% growth forecast for 2015 and 3.0% for 2016. This scenario should allow the fiscal deficit for 2016 to reach 2.8%, meaning that Spain would exit the Excessive Deficit Procedure as this figure is below the 3% threshold established. Spain's Independent Authority for Fiscal Responsibility (AiRef in Spanish) has judged these forecasts to be reasonable on the whole, although not without risk. This Focus analyses both the breakdown in the adjustment predicted and its accuracy.

Most of this reduction in the deficit does not come from higher revenue but less expenditure. Starting with the former, the Budget predicts that total non-financial revenue will increase slightly in 2016 (+0.6%) because the drop in non-tax revenue (–32.5%), exceptionally high in 2015,1 will be offset by a sharp rise in tax revenue (+6.2%). This tax revenue would be boosted by the economic recovery, resulting in higher revenue from income tax (+5.5%), corporate tax (+10%) and VAT (+4.6%). In the Social Security accounts, revenue from employer social contributions would increase by 6.7%. These revenue forecasts assume that the impact of economic activity on income will be greater than the effect observed historically and may therefore be slightly optimistic. Moreover, the last steps for the tax reform completion include a reduction of corporate tax plus a whole year of lower income taxes, and thus the revenue expected should be lower.

With regard to state expenditure, this is expected to fall in 2016 (–3.0%) due to a significant drop in interest payments and current transfers. The lower expenditure on interest payments (–5.6%) reflects the lower average cost of debt and its stabilisation while current transfers decrease by 3.2% as a consequence of the lower contribution paid to the Public State Employment Service (SPEE in Spanish) resulting from a decrease in unemployment subsidies. The forecasts for both items seem plausible given the expected macroeconomic situation.

Excluding these cyclical reductions, expenditure will increase in 2016 in most of the other items (personnel, liabilities, Social Security contributions, etc.). Moreover, the majority of the new measures contained in the Budget are concentrated it is in this area of expenditure. Of particular note are those affecting civil servants: they will have a wage rise of 1% and 50% of their extraordinary pay suppressed in 2012 will be refunded, their «free days» (additional days given for seniority and also holiday) will be restored, plus the workforce replacement rate will increase as a result of the planned 5.0% rise in expenditure on government employees.

The 2016 Budget sets the same deficit target for 2016 as that contained in the Stability Programme 2014-2017, presented in April 2014. This programme, however, assumed a much lower GDP growth of 1.8% in 2015 and 2.3% in 2016, so that the structural adjustment that now needs to be carried out between 2015 and 2016 will be much less than originally forecasted when the agreement was reached, with the European Commission, regarding the rate of reduction required in the public deficit. Maintaining the structural adjustment calculated at that time (namely 0.5 pps) and assuming the government's economic forecasts are accurate, the deficit could fall to 2.3% next year. As noted in the Budget, this adjustment no longer comes, as in previous years, from discretional cost-cutting measures or from higher taxes but from larger revenues and a reduction in spending thanks to the economic recovery.

The 2016 Budget therefore marks a change in direction after several years of strong structural adjustments: at present the cyclical improvements in the economy will help to reduce the deficit. The best course of action would be to carry out structural adjustments when there is a tail wind to help public finances recover more quickly and avoid having to repeat the experience of tackling them in a headwind.

1. In 2015, the item of non-tax revenue was exceptionally high because of income from the privatisation of AENA. 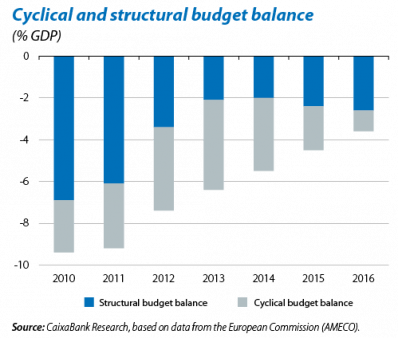