Growth in the US economy will be supported by more benign fiscal conditions and a calmer context in terms of uncertainty in 2014. In particular, the IMF predicts fiscal adjustment of 1.1% of GDP this year, compared with 2.6% in 2013. The risk has improved of a political impasse preventing an increase in the US debt ceiling (the legal limit to the amount of debt the state can take out) given the better budget situation and recent agreement reached between Democrats and Republicans regarding the sequester.

This smaller fiscal adjustment in 2014 can be explained both in terms of income and expenditure. In the case of income, in 2013 tax revenue was inflated by the non-recurrent effect of many high-tax households transferring earnings from 2013 to 2012 as they expected conditions to be unfavourable. This will not be the case in 2014, since growth forecasts are significantly higher than in 2013 (2.9% compared with 1.8%).

In the case of expenditure, the effect of the sequester proposed for 2014 will be smaller than in 2013, both due to the lower automatic cuts planned and also to the agreements that are likely to be reached in order to soften these reductions. By way of example, in December 2013 the bipartisan committee made up of Democratic and Republican leaders agreed to withdraw some of the automatic cuts contained in the sequester (totalling 63 billion dollars).

In addition to the smaller sequester effect in 2014, we should also remember that the reduction in expenditure in 2013 was affected by a significant decrease in defence spending (6.6%) and in unemployment benefits (24%), which we believe to be temporary in both cases. Lastly, the federal government shutdown experienced by the USA in October adds to the adjustment made in 2013, since it entails an additional reduction in public expenditure that is more than likely to be offset by greater spending in 2014. This could reduce even further the adjustment estimated by the IMF for 2014.

Regarding fiscal uncertainty, the debt ceiling, which can only be raised on the agreement of both houses in Congress, continues to be a risk hovering over the country's finances. This legal limit was created as an instrument to control spending but its increase from 30% of GDP in 1973 to the current level of 100% raises doubts concerning its true usefulness.

Undoubtedly, the impossibility of getting any further into debt that would be imposed by the debt ceiling would have wider consequences than the federal government shutdown last October. The federal government, forced to keep within its debt limits, would have to make drastic cuts in spending. In fact, the suspension of the debt ceiling agreed last October will come to an end on 7 February 2014. The Treasury has a buffer of 200 billion dollars which would give the state coffers some leeway until mid-March; in the best of cases, up to the beginning of April.

Nonetheless, the negative perception, on the part of public opinion, of the political impasse that led to last autumn's shutdown significantly reduces doubts regarding the debt ceiling. The surprising speed with which the bipartisan committee came to an agreement to suspend the sequester last December is the best proof that the different parties have realised that, to avoid being punished in the political polls, they must act quickly and decisively. 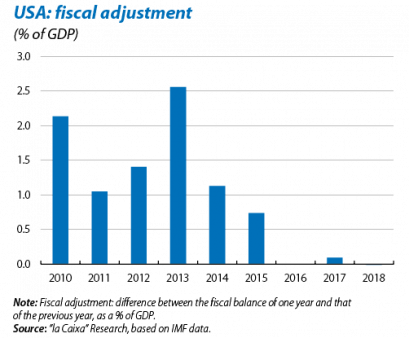 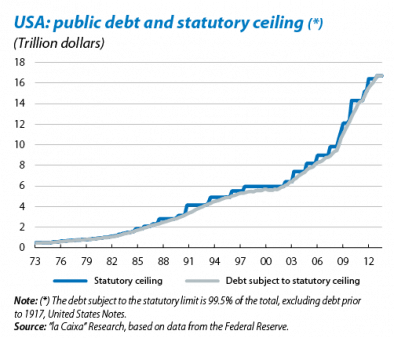