Work pending: the NIIP and the quality of exports

The high and negative net international investment position (NIIP) is one of the areas where the Spanish economy has still a lot of work to do. In 2014 it stood at 93.5% of GDP while the European Commission places the threshold at –35% of GDP. It is not easy to improve the NIIP as this requires a sustained current account surplus for a long period of time. For example, a surplus of 1.8% of GDP, on average, would be necessary for the next 12 years to bring the NIIP down to –35% of GDP.1

To achieve a current account surplus of this size, the Spanish economy must continue to make gains in  competitiveness. Broadly speaking, there are two ways to increase competitiveness: by reducing the price of exports while maintaining their quality, or by increasing their quality while maintaining the price. Although Spain's unit labour costs have fallen quite considerably compared with its trading partners over the last few years, helping the country to recover the price competitiveness it had lost in the years prior to the crisis, it is difficult to continue making gains in price competitiveness in the current climate of low inflation. It is therefore even more pressing to find complementary routes, such as improving the quality of the products exported.

A good way to estimate the quality of a country's exports is via their technological content. In general, countries that export products of higher quality and value added tend to have a greater technological capacity. In Spain, only 10% of all industrial goods exported in 2013 had a high technological component. This figure contrasts with the global demand for technology-intensive goods which, in 2013, accounted for 23% of all goods traded at a global level. At a global level, the high-tech goods segment has grown the most in the last few decades, especially between 1990 and 2000 when it went from accounting for 18% of world trade to 26%. Over the last few years this segment has grown at the same rate as world trade but, according to the IMF,2 it will once again take centre stage in the coming years. The trend in Spanish exports in this respect has been very small and there is still a lot of room for improvement.

Improving the technological component of products is not only desirable due to the high growth potential it offers. Greater technological development would also increase the value added of products and their differentiation, making demand less sensitive to any price variations. This last aspect is particularly relevant for companies competing at an international level as they are highly exposed to exchange rate fluctuations. But the benefits for the economy as a whole are much more extensive, ranging from improvements in productivity to, naturally, the creation of higher quality jobs.

One of the key factors that determine a company's capacity to innovate and the technological development it can offer in its products is the size of the firm. In general, to make progress in this respect it is vital to invest heavily and larger companies are usually in a better position to do so. As can be seen in the second graph, small firms tend to be less productive and to invest less in R&D, remaining anchored in lower quality production segments with a smaller technological component. Designing an environment that encourages firms to grow is key to improving the quality of Spanish exports; an essential ingredient to improving the current account surplus and reducing the NIIP. 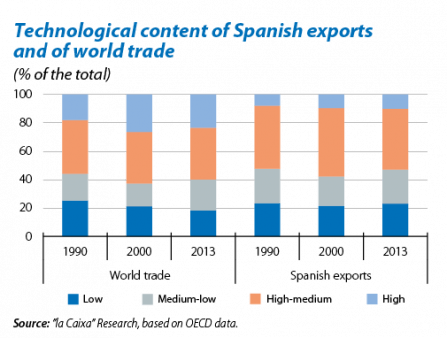 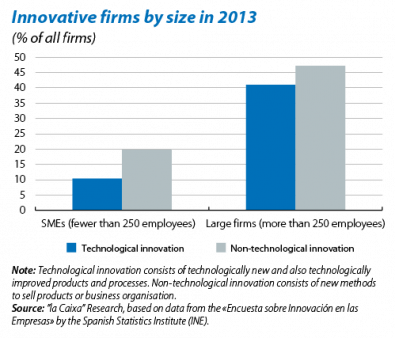