The year ends with an improved tone

Moderate growth in the euro area. In Q3 the euro area's GDP grew by 0.2% quarter-on-quarter, the same figure as in the previous quarter. Of particular note is the rise in private consumption (+0.5%) and exports (+0.8%). However, investment posted negative growth and net exports made an overall negative contribution due to the large increase in imports  (+1.2%). We predict the same growth (0.2%) in the last quarter which will bring GDP growth for the whole year to 0.8%. This trend of positive growth will consolidate over the coming year, supported both by domestic demand, in particular private consumption thanks to the increase in disposable income and low commodity prices, as well as by exports.

Revision of growth forecasts for 2015. The European Central Bank expects the euro area to grow by 0.8% in 2014 and by 1.0% in 2015, several tenths of a percentage point less than in its forecasts in September. To explain this downward revision, the ECB pointed to the fragility of the recovery with weaker economic activity than expected, the risk of  deflation, the delay in implementing structural reforms in some countries and persistent geopolitical risks. However, its forecasts do not include the effects of a possible change in policy in 2015, including monetary. As argued in the Focus «The ECB finds itself in an alley with just one exit: QE», the bulk of the evidence available suggests that the ECB will embark on a programme of quantitative easing in 2015 Q1. This programme will push down interest rates, helping to consolidate the revival in credit, but will particularly lead to a devaluation of the euro, which will favour the export sector. The forecasts of "la Caixa" Research take into account the effects of the different policies that will be employed in 2015, including a quantitative easing programme during 2015 that will last approximately one year. The euro area is expected
to grow by 1.3% in 2015, increasing to 1.8% in 2016 as quantitative easing takes effect.

Activity in the euro area recovers slightly in Q4. Business indicators have ended the year showing some improvement, albeit still at moderate levels. In France the PMI index rose slightly but is still in the recessionary zone while in Germany both the IFO (business climate index) and ZEW indices (which measures the expectations of investors and analysts) rose significantly. This positive trend can also be seen in the figures for industrial production, up by 0.1% month-on-month in October (0.7% year-on-year) with increases in all sectors (except energy and capital goods).

Demand indicators pick up slightly. In October retail sales grew by 0.4% month-on-month, consolidating the positive trend for the year so far and a 1.4% improvement on October's figure in 2013. This improvement is also reflected in the indicator for consumer confidence which rose in December to its highest figure for the quarter. These positive data should consolidate over the coming months as the improved macroeconomic environment strengthens.

The labour market continues its tentative recovery. Employment grew by 0.2% quarter-on-quarter in Q3 (0.3% in Q2). The highest increases in employment were recorded in the peripheral countries, namely Spain (0.3%), Italy (0.4%) and Portugal (1.4%) although these countries all start from a lower level. Germany, with a better starting point, posted more moderate growth, specifically 0.2%. Regarding the unemployment rate, this remained stable at 11.5% in October, 0.4 pps below the figure one year ago. However, the differences between the core and periphery are still very pronounced, the two countries with the lowest unemployment being Germany (4.9%) and Austria (5.1%) and the two with the highest being Greece (25.9%) and Spain (24.0%). With regard to wage costs, these rose by 1.4% year-on-year in the euro area in 2014 Q3. Germany's wage rise, 2.0% year-on-year, was higher than the average, in accordance with its healthy labour market. However, wage adjustment is still intense in Italy and Spain with a percentage change of 0.3% and 0.7% year-on-year respectively, so that these two countries should be able to continue improving their competitiveness.

Inflation is still very weak. In November inflation fell by 0.1 pps to 0.3% due to the fall in energy prices which push down the CPI both directly and indirectly, reducing the price of manufactured goods and transport services. By country, Germany saw the largest falls, placing its inflation in November at 0.5% (a figure not seen since February 2010) while France and Italy recorded inflation of 0.4% and 0.2%, respectively. In the short term we expect falling oil prices to continue pushing down inflation, even reaching negative figures in the coming months. However, inflation is expected to rise to 0.7% in 2015 and reach 1.5% in 2016. Core inflation will remain at positive levels similar to its present situation over the coming months and will start to pick up as from the second half of 2015.

The foreign sector is still recovering. Continuing with its trend of the last few months, the euro area's current account balance saw a surplus of 251 billion euros in October (cumulative over 12 months), equivalent to 2.5% of GDP. This positive trade balance was due particularly to improved exports and lower import prices, especially for energy products. The services balance also contributed to this advance, albeit to a lesser extent. This upward trend should continue and even accelerate over the next few months thanks to the ECB's accommodative policies, which will lead to a greater depreciation of the euro, and the constant improvement in the energy balance with the current slump in oil prices. The foreign sector therefore looks like being one of the euro area's main engines of growth for the coming quarters.

Russia causes concern but alarm bells have yet to ring in the euro area. Geopolitical uncertainty (Ukraine), the West's sanctions and falling oil prices have had a very negative effect on the Russian economy, causing significant depreciation in its currency and widespread losses in its stock market. The depreciation of the rouble, which fell by more than 18% against the euro on 15 and 16 December, led Russia's central bank to take action, raising interest rates from 9.5% to 17% in a last-ditch attempt to bolster the currency. In 2015, the crisis caused by the combination of the three aforementioned factors will reduce the country's GDP more than expected. The risk of contagion to the euro area is limited, however. Russia accounts for 2.7% of the world's GDP and, in terms of trade, the countries in Eastern Europe will be the most affected. The main countries in the west of the euro area are less directly exposed: the exports to Russia from these economies account for less than 3% of their total exports. Regarding banking, the exposure of Europe's banks to Russian banking is limited except in the case of Austria. Nevertheless, the indirect effects of the Russian crisis could be substantial and it must therefore be closely monitored.

Political uncertainty in Greece. The failure of the presidential election has pushed Greece towards general elections on
25 January 2015. The Greek parliament could not achieve a large enough majority to elect a new President for the Republic in December and was forced to dissolve the chamber and call early general elections. The latest polls suggest Syriza will win which, should this come about, would greatly hinder negotiations with the troika to bring the bail-out to a satisfactory end in February. This could therefore become a new source of instability for the euro area. However, due to the large reduction in Greek debt on the balance sheets of the private investors, the risk of contagion is more contained than in the episodes of tension in 2011 and 2012. 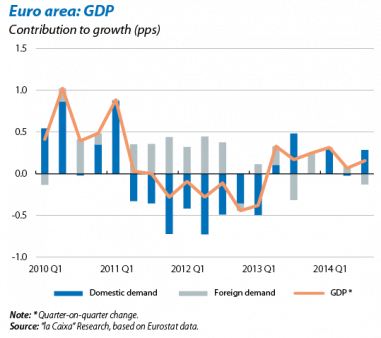 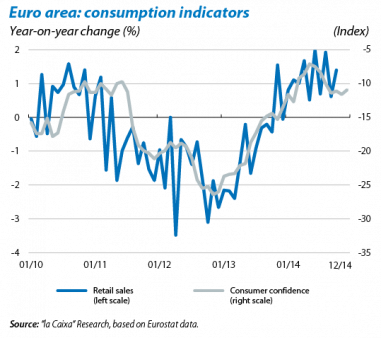 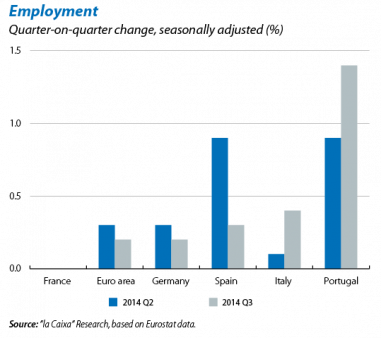 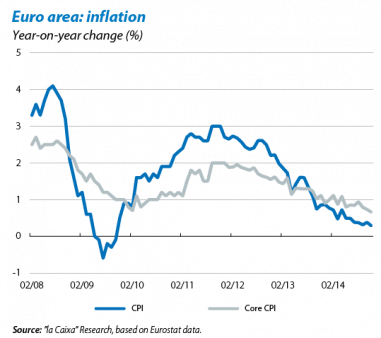