The Chinese economy grew less than expected in the first quarter of 2013, advancing 7.7% year-on-year. The quarter-on-quarter figure reveals a certain slowdown compared with the last part of 2012, going from 2.0% to 1.6% growth. These figures, together with some macroeconomic indicators that are pointing to a certain slowdown in the pace of activity in March (especially industrial production and exports), have revived doubts concerning the energy of China's reacceleration. Nonetheless, a closer look at China's figures and situation allows us to rule out any alarmist interpretations, at least for the moment. Although China's reacceleration may be more gradual than expected, the composition of its growth seems to be embarking on a transition towards a healthier structure, more sustainable in the medium term and more in line with global rebalancing.

In particular, the relative weight of investment fell substantially, adding 2.3 percentage points to year-on-year growth compared with the 3.9 points for 2012 as a whole. On the other hand, net exports increased their contribution, adding 1.1 points and, more importantly for the desired change in model, so did domestic consumption, both private and public, adding 4.3 points. Although it is still early days, this rebalancing of growth's composition is essential to ensure sustainable economic growth in China in the medium term. This rebalancing is not only being seen in terms of demand but also in supply. Although the relative economic weight of the services sector is still small, its contribution to growth once again outperformed that of industry, for the third consecutive quarter.

Regarding the outlook for the coming months, the most probable scenario is still one of gradual reacceleration, even though the latest indicators suggest a slightly more contained performance than expected at the start of the year. The robustness of credit and the expansionary tone of fiscal policy will support growth although we do not expect such an intense implementation of stimuli as happened in 2008 and 2009, equivalent to 7% of GDP and which jeopardized the health of the banking system, real estate market and local government finances. On the other hand, the recent moderation in inflationary pressures (2.1% in March compared with the cumulative figure of 2.6% for January-February) gives the Chinese authorities more room to employ easier monetary policy should activity slow up too much.

Consequently, although the first quarter's figure has led us to revise our growth forecast for the whole of 2013 slightly downwards (from 8.0% to 7.9%) due to base effects, we have maintained our main scenario of a gradual reacceleration and predict growth of 8.4% for 2014. 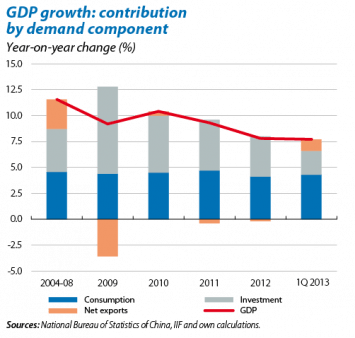 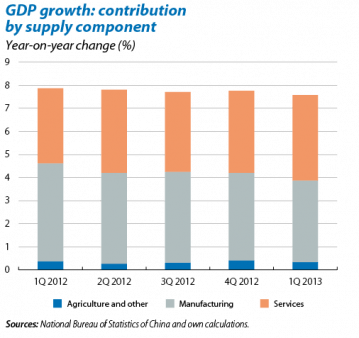