In 1800 John Adams, the second President of the United States of America, signed a law creating a library containing «such books as may be necessary for the use of Congress». By 1815 the Library of Congress had 6,487 books; today it has 158 million documents, among them 32 million books. Its function is no longer limited to meeting Congress's demand for information but it has also been the country's legal depository since the mid-19th century. It is therefore a repository of almost everything that has been published in the United States in the last 150 years. No matter how you look at it, that is a huge amount of information. But Walmart, the US retailing giant, handles information, on its own, equivalent to that of the Library of Congress every 22 seconds. That is right: one million transactions take place every hour at Walmart and the information is entered into the company's database.1 Nevertheless, impressive as this figure is, it pales into insignificance when we broaden our focus. IBM estimates that 90% of the data available in the world in 2013 had been created in the previous two years while Eric Schmidt, CEO of Google, claimed in 2010 that, every two days, the quantity of information created is the same as the total amount generated since the dawn of time up to 2003. These are such huge figures they suggest the birth of a revolutionary way of creating and managing information; a new paradigm resulting from the digitalisation of information, i.e. encoding it into digital format. Once digitalised, it can be reproduced and disseminated at almost zero marginal cost: hence the information explosion.

This paradigmatic shift must necessarily have economic effects and also, logically, an effect on business.2 But to examine this issue conceptually we need to define what we mean by the digital economy: it is an economy characterised by the use of digital technology and which, according to a widely accepted definition, namely the one by Mesenbourg (2001), it relies on three essential components: infrastructure (hardware, software, networks, etc.), organisational processes (e-business) and flows of goods and services (e-commerce).3

Thus defined, to a greater or lesser degree the digital economy is permeating almost all companies as digital technologies are used in many stages in their value chain. However, there are still differing degrees in this process which we are usefull to theoretically identify three groups of sectors or companies. The sectors we call «pure» are those whose very essence is the digital economy; they have been created within this environment, could not exist without digitalisation and form an integral part of the digital world. Companies such as Google and Facebook are an example of this category. We have named a second group the «revolutionised» sectors. These are industries that, although they existed prior to digital revolution, have transformed entirely with digitalisation, both in terms of their basic product and also other stages in their value chain. Sectors such as telecommunications, publishing, education, the media and music belong in this category. Lastly, the companies whose value chain has not essentially been altered we call the «traditional» sectors.

The pure and revolutionised sectors share three economically relevant aspects: i) the cost of producing an additional unit has shrunk dramatically, in some cases coming close to zero; ii) the cost of accessing their products has also fallen sharply and iii) distribution and transport costs are also a lot lower than previously. In fact, for many pure or revolutionised products the distinction between access and distribution is irrelevant: once produced, an app or digital book can be downloaded (and a download is both access and distribution at the same time) worldwide at almost zero cost.

Data show that pure and revolutionised sectors are substantially growing in importance. In particular, there is a great deal of evidence of considerable growth in global data flows. According to a study by McKinsey (2014),4 between 2008 and 2013 flows of international data grew by 700%. Although colossal, this figure is amply exceeded by the increase in cross-border traffic on the internet, which multiplied by 17 between 2005 and 2012. Although providing undeniable evidence of the paradigmatic shift taking place in information at an international level, concrete proof is obtained when we analyse the data from the perspective of products and sectors. McKinsey (2014) identifies the digital component of different global flows via specific examples and states that their share has increased considerably in goods but even more so in services and in data and communications. It is not implausible to suggest that the pure and revolutionised sectors are becoming global via the flows of these last two areas as they are undoubtedly easier to digitalise than goods, which are probably the last bastion of traditional industries (at least for the moment, as the internet of things promises to shake them up as well).5

To end, let us broaden our focus of analysis even further and reflect on what this substantial growth in global flows of data and information means in globalisation terms. In particular, does this new metamorphosis of globalisation (which has gone, in just over half a century, from being restricted to movements of goods and people to include capital and now digital content) that the world is at last «flat»? A flat world, according to the meaning popularised at the time by Thomas Friedman, is one in which geographical distances and barriers have become incredibly small. In short, a highly globalised world. So far Friedman's conclusion can only be taken as a partial description of the situation today. Pankaj Ghemawat has resolutely claimed that globalisation is not as extensive as sometimes assumed. According to his measurements, most flows of goods, capital, people and information are domestic: only between 10%-20% of flows are international and, of these, 40% occur within a continental-sized region and are not global.6 So the world would only be flat by regions. Nonetheless, and accepting the theory of partial or regional globalisation, the growth figures for cross-border information flows are so huge that, in the area of the digital economy, perhaps the world will flatten out much more quickly than we imagine. Because in the time you have taken to read this article (less than 10 minutes for an average reader), Walmart will have handled approximately 20 new Libraries of Congress and it is not unreasonable to suppose that something from this process of generating, storing and using information will spill over national borders. And that «something», given the volumes mentioned, is not exactly small.

5. The internet of things or objects refers to the digital interconnection of physical objects with the internet. For more information on this area, see the article «Digitalise or die: the digital transformation of industries and companies» in this Dossier. 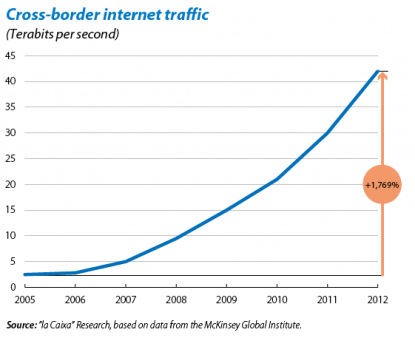 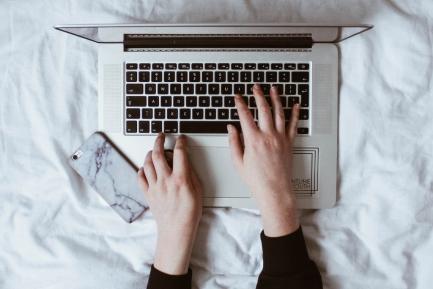 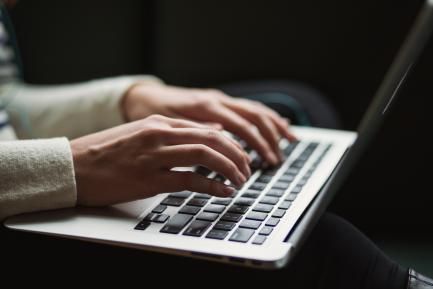