Among large developed countries, the United Kingdom is one of those hardest hit by the recession. While GDP in the USA and Germany is already at a higher level than before the crisis, it is still 3.2 p.p. lower in the United  Kingdom. The GDP flash estimate in 2Q 2013, at 0.7% quarter-on-quarter, was surprisingly and agreeably
high. However, this has not managed to dispel doubts regarding the British economy's capacity to recover.

This is the view of the Bank of England and, for this reason, on 7 August it announced it would not raise interest rates until the unemployment rate, currently at 7.7%, fell below 7%. The difference between these two figures may seem small but the Bank of England itself believes that this target will not be reached until 2016. In part, this is due to the sharp fall in productivity seen over the last few years (–0.6% annually on average between 2008 and 2012), which leads us to believe that growth in employment will remain limited until productivity regains the ground it has lost. But the slowness with which we expect the labour market to improve is also due to the fact that the underlying problems affecting the British economy are not easy to correct.

The foreign sector's poor performance is certainly the best example of this. In spite of the pound's significant depreciation, 20% against the euro since 2008, growth in exports has been very modest. On average, these have increased by 0.9% year-on-year between 2008 and 2Q 2013 while in Germany they are up by 3.0% and in the USA by 3.6%. There are many reasons for this poor performance but the following are particularly of note: the small share of exports to the main emerging countries, less growth in exports with a medium and high technological content compared with other developed countries and the high relative weight of the country's financial sector.

Disappointment with the foreign sector has occurred just when its support was needed the most. Both households and firms are immersed in a comprehensive deleveraging process that limits their capacity to consume and invest. Although it is true that this correction is taking place relatively quickly (up to 1Q 2013, the ratio between household debt and gross disposable income has fallen by more than 25 p.p. since the peak of 167% prior to the crisis), it is also true that the there is still a long way to go (the same ratio in the euro area is 99% and in the USA it is 104%).

Lastly, another huge challenge for the United Kingdom is to restore full confidence in its financial system. In spite of reacting quickly at the start of the crisis, recapitalising two of its main banks using public funds, bank credit is still shrinking sharply, especially loans to SMEs. This is partly due to weak demand. But, according to the IMF, doubts regarding the solvency of the banking sector are not helping the different programmes (implemented by the Bank of England to boost credit) to achieve the desired effect. One example of this is that, until March this year, there had been no in-depth review of the solvency of Britain's banking system to analyse the quality of its assets, revealing capital requirements totalling 27 billion pounds (1.7% of GDP). Furthermore, such doubts have yet to be entirely dispelled as this exercise did not analyse the banks' ability to resist possible shocks.

In short, activity will gradually recover in the United Kingdom as its main trading partner, the euro area, picks up; as the process of deleveraging advances and the financial system gets back to normal. Processes which, in any case, require patience. 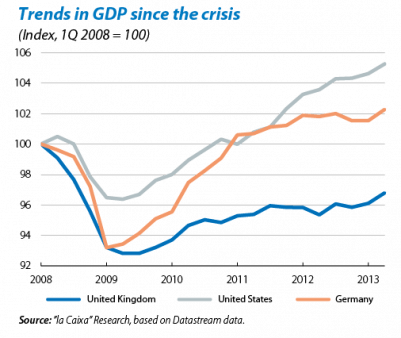 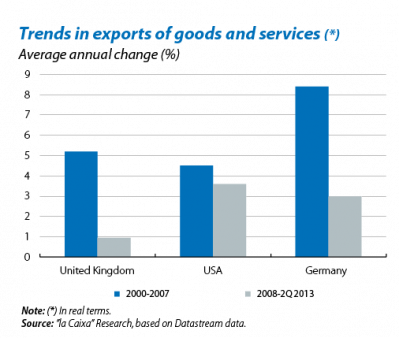