The impact of the Russian crisis on Germany and Central Europe

Germany's bad GDP figures in Q2 (down by 0.2% quarter-on-quarter) and the downward trend in business confidence over the last few months have been associated, at least in part, to the increased uncertainty surrounding the Russian geopolitical and economic situation. In particular the sanctions levied by the European Union and US on Russia, the response by the latter and the entrenched armed conflict in Ukraine (in spite of an ostensible ceasefire) are all factors helping to impair the confidence of German business people. Given this situation, we should ask ourselves to what extent this deterioration in sentiment is based on fact and whether it could also affect the countries of Central Europe.

First of all, the two main channels through which Russia's economic situation could impinge on Germany are finance and international trade. Generally speaking, the financial ties are not very significant. According to data from the IMF, in 2012 German bank loans to Russia were the equivalent of 0.6% of German GDP, far from the figure of the loans made to Russia by Austria (4.1%), Sweden (2.8%), France (2.0%) and Italy (1.5%). Other indicators such as foreign direct investment also reveal Germany's modest financial exposure to Russia. However, commercial ties are a good deal more relevant. The concerns of German business have grown in line with the bad performance of exports to Russia. In cumulative terms from January to April this year, exports to this country were down 9% year-on-year, precisely in a period when Germany's total exports rose by 7% year-on-year. However, in spite of this startling contrast we should remember that, overall, Russia is not a key market for Germany: it ranks only eleventh among the country's   international buyers, accounting for barely 1.1% of German GDP.

This figure does not seem to support the dramatic situation reflected by the decline in business confidence. Although it is difficult to provide quantitative evidence, there are some estimates of the impact of the mounting Russian crisis. Barclays Capital estimates that, under the (perfectly plausible) hypothesis that euro area exports to Russia will end up falling by 20% in 2014, the region's GDP growth would be 0.1 percentage points less than if such a shock had not existed. Other analysts point out that, in the case of Germany, growth would be between 0.2 and 0.3 percentage points lower given such a scenario. Most of the forecasts provided for German growth, and by extension growth of the euro area and Central Europe, are likely to have already incorporated a large part of this estimated effect. While, in July, the consensus of analysts predicted 2% growth for Germany in 2014, after a new round of sanctions in July, August and September, the forecast in September was 1.7%, a reduction in line with the aforementioned figures.

However, quantifying the impact of the Russian crisis on German growth merely in terms of a short-term shock on exports could be underestimating the importance of this episode. Russia's role in how the region made up of Germany and Central Europe is organised economically is more important than the channel of direct exports would suggest. Economic relations between Germany, Central Europe and Russia are largely based on the notable amount of trade between the first two (exports and imports between both represent 27.4% of Central Europe's GDP) and Russia's role  as a fundamental supplier of Central Europe (imports from Russia account for more than 6% of the GDP in Hungary,  Slovakia and Bulgaria, and between 3% and 4% in Poland and the Czech Republic). Given this situation, the work carried out by each of the parties is clear. Russia is an important supplier of commodities (in particular energy but  neither should we underestimate mineral products and metals). Central Europe uses these inputs to produce what will be their exports of intermediate and end goods (in no small measure to Germany), and Germany uses goods from Central Europe as an input for its exports to the rest of the world.

Consequently, at present the biggest risk being evaluated by German business, and European business in general, is probably the disruptive effect of a conflict on an economic region that actually functions as a large, integrated  transnational production chain. Such a risk would probably only materialise in extremely adverse scenarios but, in any case and given its serious consequences, the European Union and Russia should attempt to find some common ground of agreement as quickly as possible. 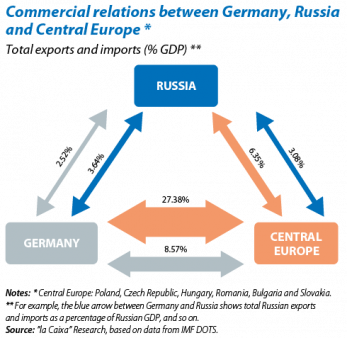