India is increasingly important for the global economy as a whole. The second largest emerging economy, after China, with a population of 1,292 million, is also large in economic terms: India accounts for 7.1% of the world's GDP (in purchasing power parity), behind only the United States and China.

This importance has recently increased thanks to India remaining on the margins of the slowdown occurring in the emerging economies with the country being proposed as a replacement for China, which is now growing more slowly. While the emerging economies as a whole have gone from growth of 5.2% in 2012 to the 4.0% forecast for 2015, India's growth has accelerated from 5.1% to 7.3% according to the IMF. It has also managed to improve its macroeconomic environment thanks to the anti-inflationary approach of the country's central bank, the Reserve Bank of India which, with its governor, Raghuram Rajan, has helped inflation to fall from 10.2% to 5.4% and the current deficit to drop from 4.8% to 1.2% of GDP (see the article «India, the star emerging economy: a glow from the past or the light of the future?» in this Dossier).

Beyond its size and improved macroeconomic situation, India is also an economy with huge potential. In addition to its favourable demographics it also has abundant natural resources, a widespread use of English and an undeniable entrepreneurial spirit. A good example of the country's dynamic business environment is provided by the 14 Indian companies included on the FT 500 in 2015.1 By comparison China has 37 firms on the FT 500 but one significant difference is that India has four companies in sectors considered to be high tech (Infosys Technologies and Tata Consultancy Services in software and computing, Bharti Airtel in mobile telephones and Sun Pharmaceutical in pharmaceuticals), while China has none. Adding to this favourable analysis, in its World Economic Outlook for October 2015 the IMF estimates that India will grow on average by 7.7% in 2017-2020, more than the 6.2% forecast for China (for a more detailed comparison see the article «India and China: so close yet so far» in this Dossier).

India therefore appears destined to become a leading contender in the world order but aren't we perhaps being overly optimistic? Will the IMF's forecasts really come about? Could India replace China as the engine of the emerging economies? The answer to all these questions lies in the country's own hands and, so far, it is on the right track, a path which includes taking the first steps in a series of reforms: firstly in public administration and the labour market, as well as reforms in tax, land and banking.

In spite of these favourable projections, however, India is suffering from two serious problems: poverty and under-investment in infrastructures. India has the largest number of poor people on the planet. According to the World Bank, 706 million Indians (58% of the population) survive on 3.1 dollars a day (measured in purchasing power parity) compared with 365 million Chinese, which means that a large proportion of the population is excluded from basic services such as healthcare, drinking water, housing, energy and education.

India's second problem is its deficient infrastructure. Between 2000 and 2012 India's cumulative gross fixed capital formation totalled 25% of China's (although perhaps investment has been excessive in the latter). The consequence of this situation is outdated logistics and production bottlenecks responsible for the manufacturing sector contributing relatively little to GDP growth, namely 17%, which also makes India's economy more closed than China's in trade terms.

Reforms are vital in public administration and the labour market in order to tackle these problems of poverty and deficient infrastructure. In 2014 the newly elected Prime Minister, Narendra Modi, received a clear reformist mandate from the election proving that such reforms, in addition to being necessary, also enjoy considerable support among the population.

The eradication of the country's widespread poverty involves a substantial increase in public spending on basic services (food, healthcare, education). By way of example, in 2014 expenditure on public healthcare in India totalled 1.3% of GDP, far below China's figure of 3.7%, Brazil's 4.7% and the figure of 8.0% in the United States. India's economic growth means it can finance an increase in social spending but the true obstacle is government inefficiency, resulting in aid being lost along the way and not reaching those who need it. That is why the main objective of public administration reform is to put an end to red tape. Such government reform needs to set up supervisory mechanisms, improve the implementation of projects, pass legislation to boost transparency, rationalise ministries (some areas of responsibility are shared by five different ministries), empower local government to bring administration closer to its beneficiaries and simplify the judicial system.

The second focus of public administration reform is to reduce state conglomerates. Modi's government plans to reduce state participation in these conglomerates by at least 25% and this would free up capital to invest in infrastructures. Coal mining warrants particular attention among such conglomerates as it is highly inefficient and is creating a serious problem of pollution. To produce one dollar of GDP, India consumes 3.4 times the energy consumed by Europe, 2.4 times that consumed by the United States and 1.7 times the world's average consumption. The situation is even worse in terms of emissions as, for every dollar of GDP, India emits 4.8 times more carbon dioxide than Europe, 3.2 times the emissions of the United States and 2.1 times the global average. India's serious environmental problem is concentrated on coal as the country, together with China, is the world's largest producer and consumer. 70% of India's emissions come from coal, in line with the fact that 71% of the country's electricity comes from coal and only 11% from hydroelectric facilities.

Other labour reforms should be aimed at improving productivity. The first step is to achieve market unity by applying common rules. Differing legislation between states makes it difficult for employees to move to geographical areas with higher growth and to technological clusters such as Bangalore, Delhi, Chennai, Hyderabad, Pune, Mumbai and Calcutta, which offer more productive jobs and better wages.

By way of conclusion, we should also remember that, although the most urgent reforms are related to public administration and the labour market, these are not the only ones required. For example, the taxation system needs to reduce the obstacles and regulations facing companies in order to boost foreign investment and the manufacturing industry, which is an area of India's economy that still requires attention. Distorting taxes and fiscal differences between states must also be eliminated as these help to push India down the World Bank's Ease of Doing Business ranking to the 130th position, behind Russia (51), Brazil (116) and China (84).

Considering all these aspects, the bulk of the evidence suggests that India does have a brilliant future in the making which could catapult it to a genuine position of leadership in the world economic order. But achieving this brilliant future also involves the formidable challenge of overcoming the limitations of the past. On its upward journey India will depend on itself and, given what we have already seen, it is making the most of all the cards it has been dealt.

1. The FT 500 is a ranking of the world's largest companies, produced by the London newspaper, the Financial Times. 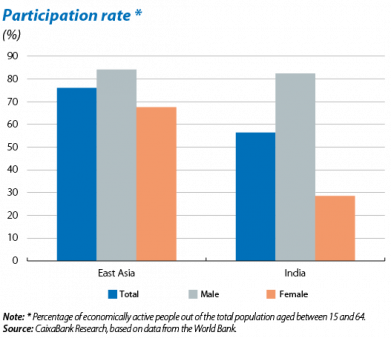 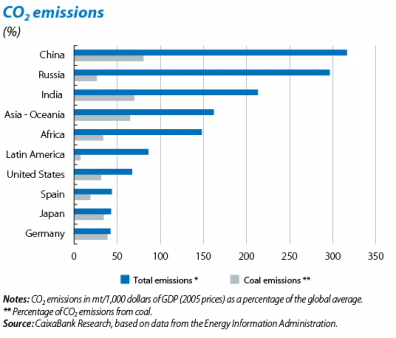