Investors seem to be going off Turkey. Since the coup d’état attempt in July 2016, the lira has depreciated by 21% against the dollar, by far the worst performance by any emerging currency. After the failed coup, Turkey’s credit rating was downgraded and, in January, it lost its investment grade given by the only agency, Fitch, which had yet to class the country’s sovereign debt as a «junk». The spread between the yield on Turkish 10-year sovereign debt compared with the US (the risk premium) reached the 800-bp zone last July, where it has remained ever since.

The trigger for these events appears to be concerns regarding Turkey’s recent political shift. The country’s institutional framework had been better than many emerging countries but recent events have sowed doubts regarding future developments. The outcome of the referendum on 16 April is particularly crucial, when citizens will decide on an important change in the Constitution. If, as expected, this is ratified by voters, Turkey’s institutional system will give the President sweeping powers. This raises questions as to how far the equilibrium between executive, legislative and judicial powers, quite finely balanced until now, will deteriorate.

But it is not only the political sphere that is causing concern. Turkey has enjoyed strong growth since it exited the Great Recession with average annual growth of 6.7% between 2010 and 2016. But this dynamism has been accompanied by two significant imbalances: high inflation (8.0% in 2010-2016) and a large current account deficit (–6.3% of GDP over the same period). In turn, this has resulted in a worrying increase in external debt (up by 12 pp of GDP between 2010 and 2016, to 48.5%). Over the last few years, Turkish firms (excluding banks) have taken advantage of the favourable international financial conditions and corporate bonds in foreign currencies rose to 32.3% of GDP in Q3 2016 (two thirds in dollars and the rest in euros), double the figure 10 years ago. This will become a weak point if the dollar and euro continue to appreciate against the lira, which is more than likely. And neither can we expect Turkey’s central bank to defend its currency to any great extent given the limited international reserves (less than its short-term external debt).

Historically, Turkey has tended to become more dependent on external financing and build up inflationary tension as its activity rate picks up. But the situation has been aggravated over the last few years by an excessively accommodative monetary policy: Turkey has not had a positive real benchmark rate since 2009. Too much monetary stimulus for an economy that, as we have already mentioned, grew substantially up to 2016. Nevertheless, it should be noted that its fiscal balance have, perhaps, been one of the few positive areas.

Turkey therefore has a lot of weak fronts. One aspect that will determine its macroeconomic trend is inflation, which will continue high (7.9%) due to the combined effect of the lira’s strong depreciation and rising commodity prices. In response, the central bank is expected to become more belligerent than in previous years: according to Bloomberg’s analyst consensus, the benchmark interest rate could reach 8.75% by the end of the year, 75 bp above its current level. But such predictions should be taken with care, given the accommodative monetary conditions of previous years. High inflation will erode spending capacity, pushing down private consumption which, together with the expected slump in investment, will prevent high growth in 2017 (2.7%, slightly less than the 2.9% in 2016). Finally, the current deficit will also remain high (5.6% of GDP). Given this situation, the IIF estimates that Turkey’s external gross financial needs will reach 28% of GDP this year (22% in 2016). A tough challenge in a more restrictive international financial context than the past. As a result, Turkey will probably remain one of the «fragile emerging economies» for some time yet. 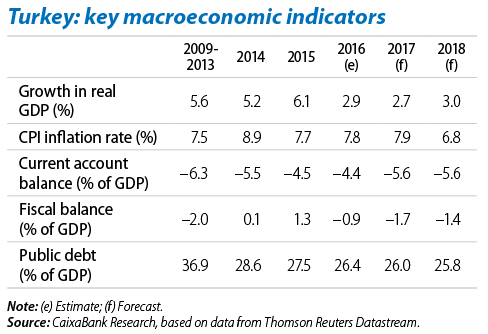