Should we be concerned about the slowdown of the Spanish economy?

The latest data on the national accounts published by the National Statistics Institute, which included slight downward revisions in recent quarters, reflected a GDP growth rate that was lower than expected. However, given that there was already an expectation that the Spanish economy’s growth rate would moderate, in this article we will see that the latest data are not cause for alarm.1 In fact, the data available to date suggest that the slowdown the country is currently facing is caused by factors that pose a limited risk and are only moderate in their scale.

A look at the latest data

Let us start by analysing the latest data, which have generated some concern. In the first table we present the data on the national accounts of the Spanish economy for the past four quarters.

As can be seen, GDP growth has slowed down significantly. Although these figures still represent a solid growth rate (higher than most developed countries, for example), there are two elements that raise some concern: the slowdown in private consumption observed in the last quarter and the poor contribution of external demand.

With regards to the first point, a quick reading of the data might suggest that the slowdown is due to a deterioration in household confidence regarding the economic outlook. However, this contrasts with the positive confidence and labour market indicators that are available. In Q2, the economic sentiment index (ESI) developed by the European Commission stood at 109.8 points, above the average for 2017 (108.6). In addition, the consumer confidence index, also elaborated by the European Commission, stood at 0.5 points, 1.2 points above the average for 2017. The composite PMI index developed by Markit, meanwhile, stood at 55.4 points in Q2, a figure compatible with robust growth rates. Finally, the labour market is also producing encouraging data, with a job creation rate of 2.8% year-on-year in Q2 (according to data from the EPA), slightly above the average growth rate of 2.6% for 2017.

In fact, if we look not only at actual consumption but also at the trend in nominal and deflator consumption, the data offer a less negative view. In particular, the second chart shows that, following an initial recovery phase (2014-2015) in which the stability of prices caused real and nominal consumption to follow a similar path, from 2016 the growth of real consumption has remained relatively stable and has shown little sensitivity to the increase in prices reflected by deflator consumption (which follows the CPI very closely). In other words, households chose to offset the price increases with greater expenditure in order to maintain their consumption of goods and services. However, in Q2 2018, the rebound in inflation (due to the oil price increase) did dent real consumption, while the growth in nominal consumption remained stable, at around 4%. This may be partly a result of the low household savings rate, which in Q2 2018 stood at 4.7%, the lowest in the historical series. Thus, the lack of reaction in the nominal consumption when faced with rising prices may be indicative of households’ limited margin for manoeuvre to increase their consumption expenditure. However, since the rise in prices is largely due to an increase in energy prices, which is expected to be temporary, actual consumption is likely to recover higher growth rates over the coming quarters as inflation falls.

With regards to the performance of exports, the data available up to July show a deterioration in the trade balance of non-energy goods. This is less surprising if we take into account the current context of deceleration in trade flows at a global level, as well as the gradual appreciation of the euro that took place between early 2017 and April 2018.2 In addition to these factors is the uncertainty generated by the trade tensions between the US and China, which could damage confidence.

In addition, the tourism sector, which has been one of the cornerstones of the trade surplus in recent years, has also seen a slowdown in its contribution to growth, following an exceptionally good 2017. As can be seen in the third chart, based on data up to July the arrival of tourists has stagnated compared to the previous year. All these factors suggest that exports will perform less favourably over the coming quarters than they have in recent years. In this regard, in the fourth chart we present a table with different estimates of the impact that the slowdown in the tourism sector might have on GDP: in a reasonable scenario, the impact would be around 0.1-0.2 pps.

The high growth rates registered in Spain between 2015 and 2016 would not have been possible without a series of factors that gave more impetus to the economic recovery already underway. These tailwinds include the fall in oil prices that occurred at the end of 2014 (the price of crude oil went from 112 dollars in June 2014 to 50 dollars in January 2015), the reduction of interest rates resulting from the policies of the ECB, a fiscal policy that went from reducing growth to making slight contributions, and the depreciation of the euro. All these factors are reflected in the fifth chart, where our estimates show that the tailwinds made a particularly strong contribution in 2015 and 2016.

However, at the current juncture, many of these tailwinds have run out of steam or have even changed direction. The most obvious examples include the oil price and the exchange rate. After standing at 48 dollars per barrel in June 2017, the price of oil has been going up and in September 2018 it reached around 80 dollars. Furthermore, the nominal effective exchange rate of the euro has appreciated by 6% since the beginning of 2017. Given this change in the tailwinds, in the last chart we also show our estimates of the impact on GDP forecast for each of the four factors mentioned above (oil prices, interest rates, exchange rate and fiscal policy) for the period 2018-2019.

As can be seen, according to CaixaBank Research’s estimates, all the factors considered will limit the growth of the Spanish economy, with the exception of fiscal policy, which we predict will continue to have a slightly expansionary effect. In relation to the oil price, the biggest impact is expected to come this year, since we expect the price to curb its upward trend thereafter. On the other hand, the effect of the higher interest rates, brought about both by the ECB’s net asset purchases stopping at the end of 2018 and by the increases to the ECB’s reference rates at the end of 2019, is expected begin to emerge in 2019. Finally, the appreciation of the euro that has occurred to date, and which is expected to still have some room to continue, will weigh down on GDP throughout this year and the next. All in all, it should be noted that the negative impact of these factors on GDP growth is not expected to exceed –0.4 pps of GDP in total. This is a much smaller impact than that observed in 2015 and 2016, when these factors made a positive contribution of between 1 and 1.5 pps to GDP growth.

So, should we be alarmed by the economic slowdown indicated by the latest data? Our analysis suggests that, although a slowdown is to be expected and could intensify over the course of this year and the next, the scale of it and the factors that are causing it do not point towards a sudden slowdown. Rather, they support the view that the economy is shifting gears and entering a more advanced phase of the cycle.

1. As an example, see the article «The Spanish economy in 2017: growing with fewer tailwinds» included in the Dossier of the MR12/2016. 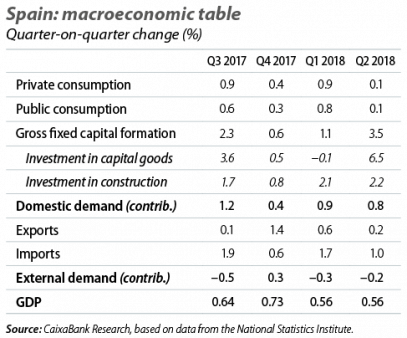 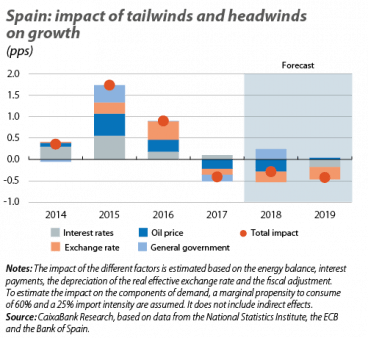 The beginning of a necessary recovery Taking stock of the «intermediate» sectors in Spain 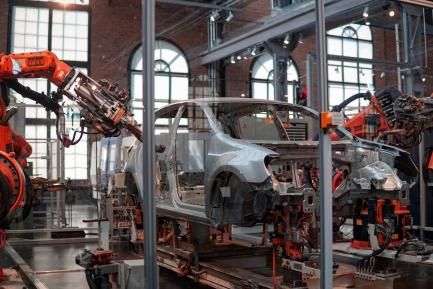