Will the euro area catch a cold from the Asian giant sneezing?

The close ties between China and the rest of the Asian countries, commodity exporters and Africa explain how the slowdown of this economy is having an effect on all of them. However, the ties linking China to Europe are a little more unknown. The aim of this Focus is to study the commercial, investment and financial relations between the euro area and China to analyse the possible repercussions of China's economic slowdown on the region.

The euro area's commercial relations with China increased considerably as China became much more of a global player in economic terms. In particular exports of goods from euro area countries to China went from representing 1% of all annual exports in 2000 to 3.3% in 2015. In spite of this increase, however, exports to China still only account for a small percentage of all exports for most countries. In this respect, and in commercial terms, the direct impact of China's slowdown will be moderate and provided this slowdown is gradual and does not substantially affect world growth, it will be offset by improvements in exports to other countries whose growth is increasing, such as the US, the UK and other euro area neighbours.

The case of Germany, however, warrants particular scrutiny as it is the country with the largest share of exports to China (5.7% of all its exports of goods). Nevertheless this relevance diminishes when we look more closely at the flows of exports. If we rank German exports by the value added content generated in the country,1 exports to China fall to fifth position after the US, France, United Kingdom and Italy. Regarding the direct financial impact of China's slowdown, it is estimated that this will also be small given the limited direct financial links between Europe and the country. This is largely a reflection of the still small number of Chinese crossborder financial transactions. Around 1% of all financial liabilities in the euro area are located in China (including Hong Kong). A more significant channel for passing on the effect of the slowdown might be the foreign direct investment (FDI) carried out by China in the EU, estimated at about 10.4 billion euros in 20132 (around 4.2% of the FDI received by the euro area), which could decrease if the country's slowdown gets worse. However, flows of Chinese FDI are still underrepresented in relation to the size of its economy and should actually increase as its financial system is gradually liberalised.

On the whole, considering the direct relations between the euro area and China the impact of the Asian giant's slowdown should be limited. According to simulations by the European Commission and the ECB, a decrease in Chinese growth of 1 pp would reduce the euro area's growth by between 0.1 and 0.2 pps. If the fears regarding China materialise and, for example, our growth forecast for the country in 2016 falls from 6.5% to 6.0%, a scenario still far from a sharp slowdown, growth in the euro area would be between 0.05 and 0.1 pps lower than the current forecast, namely 1.8%.

Lastly, there are other indirect ways that the Asian giant's economic slowdown might impact Europe's economy such as reducing commodity prices or potential contagion due to an upswing in uncertainty. The first has a fundamentally positive impact for European growth as it is a net importer of these commodities, in particular oil. Here we also expect that, provided China's slowdown in growth is gradual, the indirect effects will be limited too. The fear lies in the possibility of the slowdown speeding up and the Chinese authorities failing to make adequate use of the leeway they have with economic policy to quickly put a stop to the situation. This case, which does not seem very likely at present, could lead to an upswing in global financial volatility that might jeopardise the euro area's current recovery.

In summary, the ties between China and Europe are not strong enough for Europe to directly catch a cold from China sneezing; it would have to get the flu and the Chinese authorities have enough vaccines to stop this from happening.

1. This means that many German exports to China involve the transformation of products or raw materials that have been previously imported. 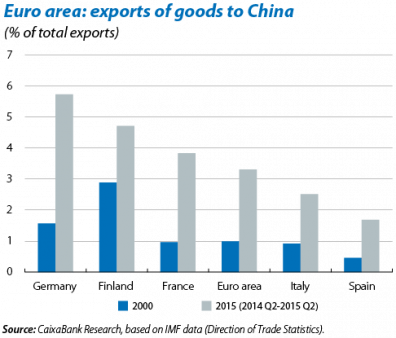