The slump in oil prices since the summer of 2014, which is still 45% in spite of the slight upswing seen in the last few weeks, is especially due to supply factors. Of particular note is the change in strategy of Saudi Arabia which,  faced with increasing global production, has refused to play its role as a «swing producer» in order to quash competition.

Over the last few years, Saudi Arabia has taken advantage of its privileged position to act as a swing producer and keep global oil supply in line with demand at any given time, thereby helping to stabilise prices. However, within the current context of increasing supply, OPEC's major producer has decided not to reduce its production, a stance which has clearly pushed down prices, something the country can easily withstand given its low extraction costs (see the first graph).

But this is a card that not all oil-producing countries can play. At current prices, part of the supply is no longer profitable, which should help to gradually push up the crude price as those producers most affected by lower profits will cut back on their investment, leading to a reduction in supply over the medium term. It should be noted that the cost of producing oil depends both on the region and on the method of extraction: the cheapest petroleum to extract is, precisely, onshore oil in the Middle East, followed at some distance by offshore shelf and Russian onshore extraction. Among the most expensive is North American shale oil. According to estimates by Rystad Energy, the average price at which shale exploitation becomes profitable is around 62 dollars per barrel, 2.5 higher than the figure for Saudi Arabia. Unusually low prices for a prolonged period of time would therefore seriously punish shale oil production in the US.1

So is Saudi Arabia managing to curtail production by its competitors? This does seem to be the case. In the US, the number of oil platforms in operation has dropped to its lowest level since 2011 while the number of new shale extraction permits has also fallen, from close to 3,000 a month granted in September 2014 to 1,500 in December 2014. More generally, large oil companies have announced investment cuts to the tune of 20% (see the second graph), such announcements being in line with the cancellation of numerous exploration projects in the Arctic area, where crude oil has yet to be exploited due to high extraction costs.

In short, oil prices are likely to recover gradually given the lower amount of capital being invested by energy firms. Nonetheless, we cannot rule out further shocks to the price, especially as crude oil inventories have increased considerably over the past few months.

1. It is important to note that the cost curve graph corresponds to costs at current production levels. For example, if Saudi Arabia increased its production substantially, its average cost would be higher as it is increasingly more expensive for the country to increase its production. 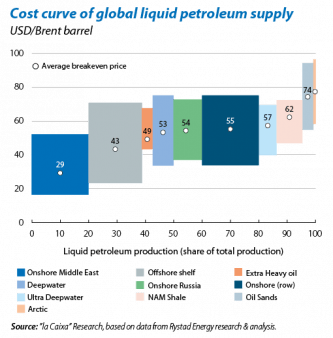 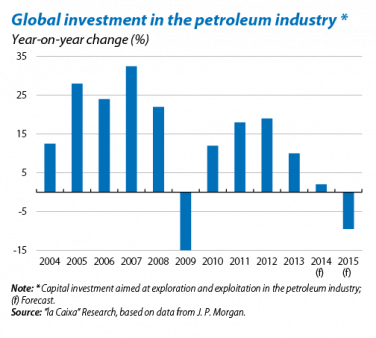