Concern regarding China's economic-financial situation has intensified over the last few weeks due to tensions observed in the interbank market. The 1-day Shibor interest rate (Shanghai Interbank Offered Rate) reached levels higher than 8%, an all-time high; similarly, the 7-day Repo rate also posted a new peak, reaching 11.2%. Memories of the crisis suffered by the interbank markets of western countries in 2007-2008 have led to anxiety among international investors. In order to properly gauge the implications of this Chinese episode, it is useful to bear in mind three important elements.

Firstly, in June a series of seasonal factors led to a temporary increase in the demand for liquidity: the payment of tax by a large part of China's corporate sector, the Duanwu festivities and the sharp drop in exports to Hong Kong. Secondly, the country's macroeconomic context suggests a slowdown in its rate of activity. In principle, this is a logical and desirable adjustment towards a more balanced pattern of growth with a greater contribution from domestic demand (in particular from private consumption). In fact, the country's economic policy has been designed with this aim in mind. However, the persistent predominance of disappointing macroeconomic figures has not helped to calm nerves in the interbank market. Lastly, the credit provided by China's financial system has grown at a very fast rate over the last few years, particularly in its so-called shadow banking system (SBS, non-banking financial institutions who are less exposed to regulation). The Chinese authorities have repeatedly voiced their concern regarding this situation as well as their desire to prevent the formation of bubbles. Although the extent of the SBS in relation to China's GDP is limited compared with the USA or euro area, such fears are due to the speed of the expansion in credit and financial products offered by these entities, offering yields much higher than traditional bank deposits. A large part of the funds have been lent to finance high-risk projects with long-term maturities. If we add to this the fact that these funds have mostly been obtained on the interbank market, the ultimate outcome is the risk of maturity mismatch.

The coinciding of these three factors explains the reticence of the authorities to intervene quickly and aggressively by injecting massive amounts of liquidity into the market via OMO (Open Market Operations), as they had often done in the past whenever tensions appeared. In June's episode, the central bank intervened unhurriedly and selectively. Certainly their action was enough to contain the tensions towards the end of the month but this mode of behaviour contains two important messages. One: financial institutions, particularly those with a greater degree of dependence on the interbank market for their funding, must manage liquidity risk carefully and properly. Two: the abundance of liquidity in the markets involves the risk of encouraging asset bubbles, so that a period of great availability of funds will very probably alternate with more restricted availability in the future. In summary, these episodes of stress have highlighted a shift in the central bank's priorities towards the long-lasting stability of financial markets. The overriding question now is whether it is going too far, running the risk of forcing financial activity and the real economy to contract too much. 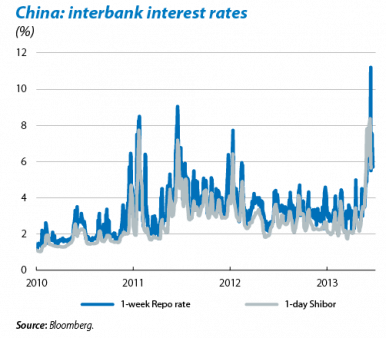