Over the last five years, Spanish firms have notably improved their financial position. This trend speeded up in 2012 with a 92.4% annual increase in net lending up to 36.27 billion euros (3.5% of GDP). In contrast, households and the general government saw a significant deterioration in their net lending over the same period. To a certain extent, it is surprising that, within a context of economic recession, companies have seen such an overall improvement.

A detailed analysis of the National Accounts figures shows that this is due to two fundamental factors. Firstly, gross operating profit (GOP) rose by 4.6% in 2012 as a result of lower payroll costs which, in turn, can be explained by the drop in employment. It is important to note that, in the National Accounts system, GOP is what remains of the gross value added after payments to the labour factor and net of taxes on production. This is therefore not equivalent to corporate earnings as it also includes amortization and other income (rent, etc.). The second factor helping to boost corporate savings is the fall in investment, which was –3.6% in 2012.

Firms are using this financing capacity to deleverage. According to the financial accounts published by the Bank of Spain, corporate debt has fallen from the peak of 1,495 billion euros recorded in 2010 (144.4% of GDP) to 1,372 billion in the fourth quarter of 2012 (131.7% of GDP). This trend speeded up in the fourth quarter last year due to the transfer of bank loans to the Sareb, as they were valued at their transaction price, lower than the value at which they were previously recorded on the banks' balance sheets.

A change is also occurring in the composition of corporate debt. In the last quarter of the year, as international financing markets gradually reopened, large Spanish firms took advantage of the occasion to issue corporate bonds. These placements were very well received and helped to diversify the sources of corporate financing. This trend speeded up in the first quarter of the year with bond issuances totalling 6.9 billion euros. However, the capacity of this financing channel to soften the fall in bank credit is limited as the main buyers of these bonds were financial institutions and, moreover, only a few companies can access this market.

In short, non-financial firms are the sector of the Spanish economy that has made most progress in their deleveraging and that, little by little, are managing to diversify their sources of financing. This greater capacity of the sector is helping to secure a strategic position for firms to increase investment whenever new business opportunities appear. 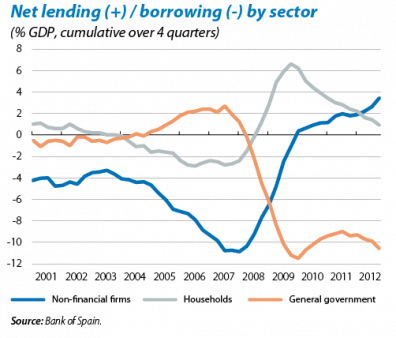 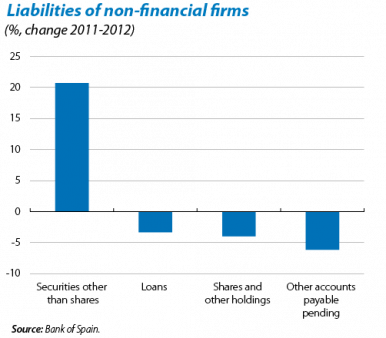