The Fed hikes - outflows of capital from emerging economies?

On 16 December the Federal Reserve (Fed) raised its interest rate for the first time in almost a decade. As low US interest rates (and the extraordinary amount of liquidity injected by the Fed and other central banks) are factors that have pushed up financial flows towards emerging countries, there is some concern that tighter monetary conditions could lead to significant outflows of capital. Given that, since May 2015, there has been a slowdown in capital entering the emerging economies and that this process actually became an outflow of capital between August and November in many of them, might this be a prelude to a more serious loss of capital?

We should remember that monetary normalisation did not begin with December's interest rate hike. As an initial phase (as from May 2013), the Fed started to outline how it would exit the period of unconventional monetary policy and provided forward guidance. In a second phase (as from December 2013), the rate of bond purchases started to decrease (the so-called tapering). Interest rate hikes therefore constitute the third phase in monetary normalisation. So what has been the trend in capital flows to emerging countries since this whole process started?

Whereas, in May 2013, the 12-month cumulative net inflows of capital in shares and debt stood at around 358 billion dollars, one year after the Fed's shift in its forward guidance the net inflows of capital were 53% lower.1 They were still positive but their level was, at that time, the lowest it had been since the Great Recession of 2008-2009, the only time in the last decade when net portfolio capital inflows had been negative. After recovering appreciably between May 2014 and May 2015, another slowdown began in emerging capital inflows, reaching significant levels: in November net portfolio capital inflows fell by 71% year-on-year, always in 12-month cumulative terms.

Although intense, this episode did not affect all emerging economies equally, however. Many suffered net portfolio capital outflows while others, such as Mexico, Chile, the Czech Republic and Poland, did not. So what do these four countries have in common? A healthy macroeconomic situation: those countries suffering from net portfolio capital outflows since August tend to have excessive macroeconomic imbalances (Brazil and Turkey). It should also be noted that capital outflows have been considerable in some countries. This is the case of South Africa (which between July and November posted net sales of shares and debt equivalent to 4.1% of the value of its foreign currency reserves), Turkey (2.5%) and Brazil (1.8%). This is important because if a country that is particularly relevant in regional terms (albeit not in systemic terms) starts to encounter difficulties, this is a source of concern given the current environment of financial pressure on emerging countries (such is the case of Turkey, located in the centre of a delicate region).

What can we deduce from this sequence regarding the possible events in 2016? History and theory suggest that it is normal for markets to anticipate monetary policy decisions and consequently part of what happened in 2015 is due to this effect. Nonetheless, the fact that some countries still have macroeconomic imbalances, including some regionally systemic ones, means that investor sensitivity to fluctuations in risk aversion will be high in such cases. We can therefore expect quite intense episodes of capital outflows at some point. But will such outflows be widespread and long-lasting? In the absence of genuinely systemic negative shocks, this would be an extreme scenario that does not seem very likely, but we must remember that we are entering unknown territory: the period of ultra-accommodative monetary conditions has been long and the injection of global liquidity unusually high, so it cannot be assumed that the exit from this period and its financial consequences will be in line with past experiences. Moreover, the deterioration in liquidity conditions in several financial asset markets could amplify the scope and intensity of possible shocks of an idiosyncratic and non-recurring nature. It will therefore be a challenge.

1. Regarding the effects of the analysis in question, it is important to note that the increase in interest rates in advanced economies especially affects capital inflows used to buy debt and shares in emerging countries but less so bank flows and direct foreign investment. For a review of this issue, see Koepke, R. (2015), «What Drives Capital Flows to Emerging Markets? A Survey of the Empirical Literature», IIF Working Paper. 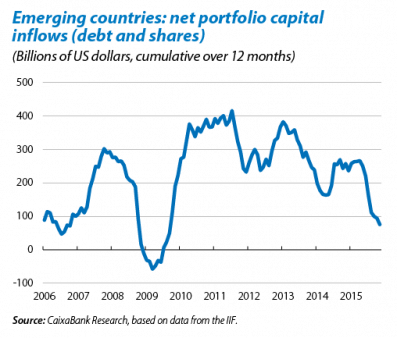