Financial inclusion in India and the challenges for the banking industry

Financial inclusion is a critical issue for developing countries and represents a significant challenge for India. In a country where more than 265 million people (21% of its population) live on less than 1.9 dollars a day, poverty reduction and economic equality are one of the most important social goals. In this context, financial inclusion is a fundamental way of achieving this target. Without access to basic financial services, poor people and small businesses have to depend on their savings or other informal sources of resources to invest in education, set up a firm or deal with any accidents or losses. In macroeconomic terms, financial inclusion increases savings, promotes investment and the consumption of durables, ultimately boosting economic growth.1 In this article we analyse India's degree of financial inclusion and its main challenges.

Financial inclusion in India has improved considerably in the last few years. Between 2011 and 2014, more than 175 million people opened a bank account, representing 18% of the population. As a result of this notable progress, access to financial services in India is high compared with other medium and low-income countries and low compared with just a few countries such as Kenya, where the popularity of mobile banking has encouraged financial inclusion. In spite of this trend more than 600 million Indians (47% of the population) still did not have a bank account in a financial institution in 2014. Similarly, the country also has one of the highest rates of informal financial services in the world as 12% of its adult population borrowed from an informal lender.

To promote even greater financial inclusion, the government implemented in 2014 the Pradhan Mantri Jan Dhan Yojana programme (PMJDY, the Hindi acronym for the Prime Minister's People Money Scheme). Between August 2014 and early December 2015, this programme resulted in more than 194 million accounts being opened.2 As state banks account for 70% of the banking sector's assets, the government gave them the task of being the main channel for financial inclusion on the supply side, to such an extent that these banks are now responsible for 78% of the accounts created through this programme. This plan also benefitted by the government's initiative to provide every Indian citizen with a unique biometric card (Aadhaar),3 helping to comply with identification requirements («know your client»). Finally, the Reserve Bank of India, the country's central bank and banking supervisor, granted in April 2014 two banking licences on the condition that 25% of new branches should be located in rural regions, precisely with the aim of promoting financial inclusion. Such promotion of competition is vital for financial inclusion as it encourages traditional (state) banks to innovate so they can offer financial services to new customer segments.

As part of the PMJDY, the authorities are also promoting a number of incentives to stimulate demand for bank accounts. The government has encouraged people to open new accounts by establishing that they should be used for cash transfers of government subsidies and other social aid. Moreover, the state also benefitted from the lower administration costs for these transfers, prevented corruption and increased control of the beneficiaries ultimately receiving these payments as each bank account is associated with a single identity card.4,5 Other financial products subsidised by the government were also associated with these new bank accounts, such as debit cards, accident and life insurance, and pension plans.

These financial inclusion measures are particularly helping certain social groups that had been traditionally excluded from the financial system such as farmers and day labourers. The programme allows these workers to open joint accounts, making such groups more attractive for banks as they generate more transactions and have a greater financial capacity operating as a cooperative. Lastly, the financial inclusion programme has also benefitted from the so-called network effect or externality via which the number of individuals with access to financial services increases the value of such services for everyone using them. In this case, the inclusion of certain groups in the financial system creates a critical mass of new customers, making it easier for them to interact with each other and also with other segments of society and increasing both interest and competition on the part of banks as they start to focus on this market segment. This situation encourages the creation of financial products aimed at these new customers and, consequently, they become more interested in obtaining these new financial products.

The leadingchallenge for banking is how to make a profit from millions of new customers with very low incomes. Scale, very low operating costs and a range of financial products specific for these customer segments, based on transactional services and simple savings and insurance products, are all required in order for this business model to be sustainable. At present the new accounts created under the PMJDY programme are not being used very extensively as 34% have a zero balance while deposits total just 4.1 billion dollars (an average of 20 dollars per account).6

The implementation of this new business model and the use of new technologies will be essential for rendering financial inclusion sustainable. Agents or correspondent banking (for example post offices, petrol stations and other establishments) have considerably reduced the costs of the PMJDY as opening an account via these channels costs one fifteenth of what it would cost a bank. According to market estimates, the cost of opening and maintaining each new PMJDY account is 3-4 dollars per year. The State Bank of India, the country's largest state bank, has led the field in using this channel, representing 90% of the accounts opened through the programme.7 To improve implementation, portable terminals are being distributed to postal staff so that transfers can be authorised using Aadhaar identity cards, eliminating the need for someone to go to an agent or branch. Lastly, digitalisation and the growing use of mobile phones for bank transactions are helping to expand the scale of transactions. Although the penetration of mobiles in India is high, their use for transactions is low compared with other developing countries because of the differences between platforms and the procedures adopted by banks.8 To promote digitalisation in India, the National Payments Corporation of India is developing a single payment interface based on the Aadhaar biometric card.

In the future greater financial inclusion should also be accompanied by greater financial literacy and the expansion of credit registries to avoid the risks associated with rising indebtness levels. It is particularly important to promote the financial education of new customers, agents and correspondents as a large proportion of them had never accessed formal financial services prior to the PMJDY. Lastly, the use of Aadhaar biometric cards could also help to generate and maintain new credit databases, making it easier to estimate potential losses and to price new financial products.

3. The Aadhaar (Hindi for «foundation») is India's national identity document and it contains biometric data on the individual (photograph, finger and iris print), reducing the number of duplicated or false identities. 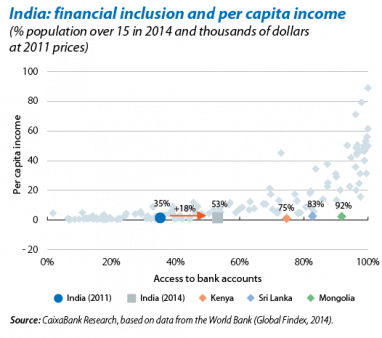 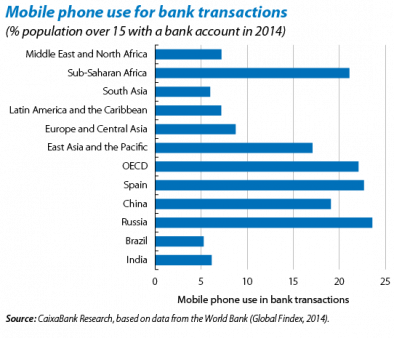