Portfolio management: from theory to practice

Portfolio management is an eminently practical issue but, one way or another, both private and professional investors (who are increasingly delegated such management) seem to endorse the saying that there is nothing so practical as a good theory. In fact, asset pricing and portfolio choice are among those areas in economics where the contribution of theories has the greatest effect beyond the borders of academia. Naturally various theories have been proposed over the years, contradictory in some aspects and complementary in others. Today they exist side by side without any one theory clearly dominating the rest, providing conceptual support for various ways of tackling management, although the dichotomy between passive and active management is probably the biggest dividing line.

In fact, the study of price formation in the case of financial assets, of the factors underlying such prices and particularly how they change over time is an issue that has remained at the epicentre of debate in academic circles since modern finance came into existence at the beginning of the second half of the 20th century. The main current of thought, clearly dominant until the early 1980s, is of neo-classical inspiration and revolves around the postulates of the efficient market hypothesis (EMH). This approach still has some standing today but has had to make room for other theoretical frameworks that include elements such as the cognitive bias suffered by individuals when taking decisions to invest, or the friction present in the workings of markets (impeding arbitrage), or problems of asymmetric information due to the agent relationship established between investors (the principal) and professional portfolio managers (the agent). Rather than imposing one theory and rejecting others, a combination provides a more useful overall view that helps to reach three important conclusions. Firstly, any systematically correct prediction of the short-term trend in stock markets is unlikely. Secondly, such predictability increases in line with the timescale due to the existence of a series of patterns that tend to be repeated again and again, such as momentum1 and mean reversion. And thirdly, in the vast majority of cases, the downside to achieving higher returns than the market average is the assumption of a larger amount of risk.

Those economists in favour of the EMH argue that it is impossible to predict any future trend for share prices since these quickly reflect any relevant information, either private or public in nature. There are three basic ingredients that result in an efficient market: investors need to be rational, their errors random and there cannot be any impediments to arbitrage. Consequently, if it is a waste of time to try to outperform the market, these economists claim that passive management strategies (which attempt to replicate the trend of a benchmark index for the market as a whole) are much more appropriate for investors than active management strategies (which move away from the market portfolio, hoping to improve the return-reward ratio), as the latter entail considerably higher trading and management costs than the former. In this respect, the passive strategy par excellence is the one known as buy and hold, which essentially consists of holding, over a substantial period of time, a diversified portfolio that at least in broad terms replicates the composition of an extensive stock market index, without getting carried away by speculation or passing fads. The increase, in the last decade, of some financial innovations such as ETFs (exchange-traded funds) and funds listed on indices for equity, bonds, currencies and commodities has helped to make passive management more effective and sophisticated.

The behavioural finance approach defies the assumption of rationality that underlies the EMH. Using both natural and artificial experiments, several authors have shown that, when investing, individuals' decision-making is subject to numerous psychological and cognitive biases that have little to do with rationality. This has significant implications both for the investor's own portfolio and also for the trend in the market as a whole. A wealth of investment strategies have appeared within the active management universe that are based on the lessons provided by behavioural finance in an attempt to improve the results of this market in risk-reward terms. Some of the most important cognitive dysfunctions identified by behavioural literature are those of overconfidence, biased opinions, loss aversion and herd behaviour. In fact, herd behaviour is probably one of the best-known aspects of behavioural finance, referring to the tendency to follow the opinions of the group in detriment to one's own beliefs even when the former appear to lack any logic or common sense. Some active management strategies are based on identifying where the herd is moving towards and heading in the same direction. Having reached this point, readers are surely asking themselves the following question: alright but if, as those who support behavioural theories argue, share prices do not follow a random pattern and can be predicted,2 should it not be the case that rational investors, by means of arbitrage (buying underpriced shares and selling overpriced ones) ultimately help to correct any deviations observed in the stock market? In spite of the logic of this argument, there are several factors that limit the rebalancing effect of arbitrage in practice. The list is long and ranges from the possibility that the proportion of wealth controlled by rational agents is very small compared with that of the rest of investors to the difficulty and risk involved in shortselling overpriced shares (see the article «Price formation in financial markets: between reason and emotion» in this Dossier). In line with the findings of Abreu and Brunnermeier3 (2002, 2003), the existence of a principal-agent problem between the investor (acting as the principal) and the investment fund manager (acting as the agent) diminishes the role of those financial brokers with a long-term investment mandate: should an episode of enthusiasm or pessimism be too strong or last too long, investors are likely to be tempted to switch their investment if their fund manager resists following the herd.

On a broader scale, quantitative investment strategies are one of the main styles of active management that attempt to apply lessons from behavioural finance by using algorithms designed to carry out trading operations in accordance with specific rules and parameters. So-called momentum strategies are one of the main exponents of quantitative investment. In short, they consist of taking advantage of any upward or downward momentum observed in stock markets in the short or medium term (one of the most complex elements to explain using the approach of rational EMH models). One simple example of this kind of strategy is the buying of shares that have recently performed better than a benchmark index and selling those that have performed worse. Another well-known active strategy is the value investing approach. Value investing prioritises the identification of shares with low value ratios such as the price-earnings ratio (P/E) or the price-to-book value (P/BV), given the predictive power of these ratios for future returns. This circumstance has been conceived by some academics and investment professionals as another clear example of «anomaly» (in the sense of deviating from the EMH's rationality paradigm), whose origin lies in the existence of the aforementioned cognitive biases which temporarily move markets away from their equilibrium levels. For others, however, this is a phenomenon caused purely by rational forces: namely the compensation received by the investor, in terms of returns, on taking up a position in this type of security, which would suffer from some kind of non-diversifiable risk in addition to the market risk entailed by CAPM type standard models. As can be seen, one important difference between value strategies and momentum strategies lies in the medium and long-term timescale that characterises the former as opposed to the much shorter timescale of the latter. To some extent, a simile could be proposed between managers who implement value strategies and the figure of the contrarian since, on several occasions, the former do the opposite to the market fluctuations if this is justified in terms of the intrinsic value of a share or group of shares. In other words, they buy shares that have fallen and become cheaper. Although there are also managers who attempt to take the middle ground between both strategies: buying cheap shares that are already showing signs of upward momentum.

However, implementing a momentum or value focus, or any other kind, in a share portfolio in no way guarantees, per se, that risk-adjusted returns will be achieved above the average or better than the market, since both strategies are subject to considerable risk. In the first case, momentum tends to occur more sharply in smaller firms or those with less liquidity, which may be detrimental during episodes of high aversion or volatility in financial markets. In the second case low value ratios may be justified if, for example, they reflect other aspects such as the difficult financial situation of a company or the unlikelihood of success or viability of a business project. On many occasions the hidden factor behind high or extraordinary returns is the risk incurred by taking up a position in a security or by adopting a certain management style. Should a highly unlikely but potentially negative event occur (i.e. a black swan), the associated risk premia which had previously played in the investor's favour could change direction and become much more harmful for the stock portfolio. Over the last few years, the development of investment according to risk factors4 (factor investing) as opposed to investment according to the type of asset (equity, government and private bonds, currencies, commodities, etc.) has come to the fore. Specifically, this new investment approach highlights the importance of managing and diversifying our portfolio's exposure to the many different risk premia existing in different segments of financial markets (stock market risk premia, the term premium for public debt, credit risk premia and liquidity risk premia, among others) and to any underlying macroeconomic factors (economic growth, inflation, real interest rates, etc.). By way of example, investors who hold a certain amount of their portfolio in corporate bonds or venture capital will be implicitly increasing their exposure to equity as both these types of assets are influenced substantially by the same risk factors that affect stock market performance.

In conclusion, the existence of a series of behavioural patterns that can be used to deduce future stock market trends does not represent the death of the EMH. Although markets sometimes show signs of relatively irrational behaviour, such mismatches in share prices do not last forever and inexorably end up correcting themselves. As professional portfolio managers know only too well, the probability of outperforming the market on a regular basis without assuming any additional risk is very low. As in many other areas, there is no such thing as a free lunch in financial markets so that, when fortune smiles and one appears, investors should make sure they get a taste before it goes cold and disappears from the table.

1. For a thorough explanation of this issue, see Shiller, R. J. (1981) «The use of volatility measures in assessing market efficiency», Journal of Finance. 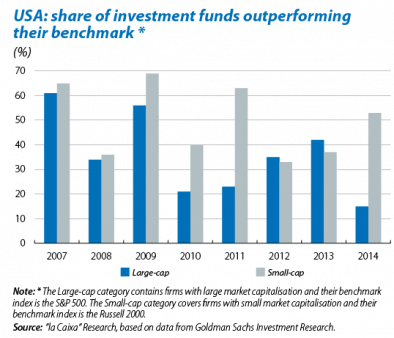 Asset management: an expanding sector on the regulator's radar