Positive prospects but greater volatility, the scenario for 2015

The year ended in a volatile mood after the relative peace and quiet of the first half of 2014 with international markets suffering the consequences of new setbacks in December. The fall in the price of crude oil, the rouble crisis and political instability in Greece all interrupted the calm reigning in November. The weak demand for funds by European banks in the ECB's second TLTRO and the unanchoring of inflation expectations have not helped the situation either, adding pressure to the monetary authority to start buying up the region's sovereign debt. These factors have led to further corrections in risk asset prices, particularly affecting emerging countries and the energy industry. However, the support of the safety net provided by global monetary accommodation, improved world growth and investors' search for yield look like laying the foundations for risk assets to perform well in 2015.

The Fed changes its rhetoric but not its intentions. At its last meeting of the year, the central bank upgraded its economic outlook for the next two years although it expects inflation to remain below 2% due to pressure from energy prices. It also introduced changes in its forward guidance by stating that, within the current context of improved economic activity in the US and a dynamic labour market, the institution will be «patient» about starting to normalise its monetary policy. Although it has abandoned the premise that it would keep interest rates low for «a considerable time», the underlying message is still highly accommodative. At the subsequent press conference, Chairman Janet Yellen noted that its monetary strategy will be affected by the trend in economic data and inflation but indicated that no hike in interest rates is likely to occur in the first two meetings of the year.

The ECB decides to launch a public debt purchase programme (QE) in 2015 Q1. At its last meeting of the year, the institution's Governing Council (GC) made no changes to official interest rates or to the parameters of its unconventional policy, albeit noting that the expansion of its balance sheet by a trillion euros is now classified as an «intention» when it had previously been seen as an «expectation». The ECB also acknowledged that economic activity and inflation are turning out to be weaker than expected. It therefore argued that it was still too early to evaluate the effectiveness of the measures already implemented (TLTROs, purchases of covered bonds and ABS), pointed out that large-scale public debt purchases are included among the possible measures and remarked that a unanimous Council would not be required to approve such measures. We therefore expect the institution to announce, early in 2015, that it is going to launch a quantitative easing programme totalling around 500 billion euros and lasting one year.

Modest demand in the TLTRO. Europe's banks requested almost 130 billion euros in the ECB's second long-term refinancing operation, slightly below the 150 billion expected by the consensus of analysts. In the two TLTROs carried out, the ECB has placed 212.4 billion euros, representing 53% of the total amount available.

The crisis of confidence regarding Russia has become a currency crisis due to the country's weak economic foundations, the downward slide in oil prices and international sanctions. The Russian currency depreciated by 30% in a single session, something the country had not seen since its financial collapse in 1998. Finally, the emergency actions taken by Russia's central bank managed to limit pressure on the rouble and redirect the extreme levels of volatility. Specifically, the monetary authority increased the official interest rate to 17% from 10.5%, intervened in the foreign exchange market by selling foreign currency reserves and announced new measures to provide banks with liquidity. In the rest of the emerging countries, of note is the active stance taken by China's monetary authorities on the macroprudential front after lowering official interest rates last month. The restriction on the use of low-rated corporate bonds as collateral in refinancing operations for financial institutions is aimed at preserving the Asian giant's financial stability.

The outbreaks of volatility boost US Treasuries. Stability has dominated the US debt market with the yield on short-term debt notably approaching the level of Fed funds (i.e. the official interest rate). The absence, so far, of any inflationary pressures and the consequent continuation of accommodative monetary policy by the Fed have brought about this situation. Over the coming months the central bank's normalisation strategy could create greater volatility and lead to an upswing in yields in the short tranche of the Treasury curve.

Upswings in volatility also boost German public debt, with the expectation of a sovereign debt QE by the ECB as an additional support. Larger flows towards safe assets (a flight to quality) due to sources of instability at a global level (falling oil prices and the Russian crisis) and at a European level (political disagreements in Greece) have pushed down yields on German bonds. Debt with maturity of between 1 and 4 years now has a negative yield and, in the case of the 10-year bund, this has fallen to a new minimum (0.6%). This trend has also been encouraged by more moderate expectations regarding economic growth and a reduction in the German Treasury's gross borrowing planned for 2015, the lowest level in 13 years.

Peripheral Europe, prepared for the launch of sovereign QE. The uncertainty regarding early elections in Greece and the Syriza party leading the polls have strongly pushed up yields on Greek sovereign debt. The likelihood of the Greek government being taken over by a party that is against the reforms demanded by the troika and against the bail-out programmes represents a considerable obstacle for Greek sovereign debt to return to the favourable path it had taken over the last few months. Albeit less intensively, this uncertainty has also affected the slope of the Portuguese curve. The uncertain political panorama in Greece has not caused any notable upset in the remaining peripheral debt, however. Expectations that the ECB will extend its range of purchases to sovereign bonds have also overshadowed these problems. This acquisition of public debt will mainly benefit Spain, Italy and Portugal with a significant narrowing of their sovereign spreads.

In Spain, the Treasury completes its financing programme for 2014, attracting almost 235 billion euros in bonds and bills. Of note was the sharp fall in costs, the longer maturities for new issuances and the fact that financing for 2015 has been brought forward.

Energy is hindering recovery in the stock exchanges. December was characterised by more volatile stock markets with the main stock market indices recording small percentage gains, albeit with very wide price ranges. Foreign exchange instability in some emerging markets, with Russia at the head, the economic consequences of cheaper crude for oil-producing countries and Greece's political instability have set the tone for the last few weeks. However, the Fed's «patient» stance regarding the normalisation of its monetary policy and the favourable statements made by ECB members on sovereign debt purchases supported the stock markets in developed countries towards the end of the month. The sector most severely hit was energy due to the risk posed for the industry's income statements by falling oil prices. Nevertheless, in spite of a more volatile environment because of interest rate normalisation in the US and various sources of geopolitical risk, the outlook for equity markets in 2015 is positive (see the Focus «Equities: a market with potential»), particularly in Europe and Spain.

The currencies of some «weak» emerging countries have been hit by falling Brent oil prices. On average, their currencies depreciated by 5% against the dollar in December in a context of severe turbulence in emerging foreign exchange markets. For its part the euro's exchange rate has continued to weaken, reaching 1.22 dollars, its lowest value in two years. The effect on Europe's currency of the disparity between the monetary policies employed in the US and the euro area will tend to increase as the ECB's sovereign QE programme looks like starting up. Regarding commodities, Brent oil has continued to fall, reaching around 60 dollars per barrel where it remained stable at the end of the year. In the short term excess supply, the downward revision of forecasts for crude oil demand in 2015 and the lack of agreement among OPEC countries to reduce their production will keep the price low. 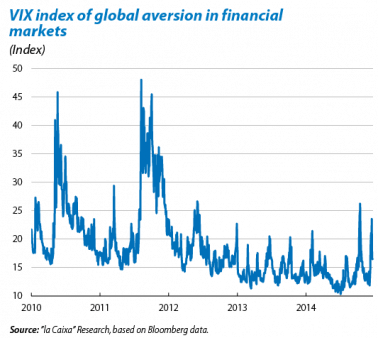 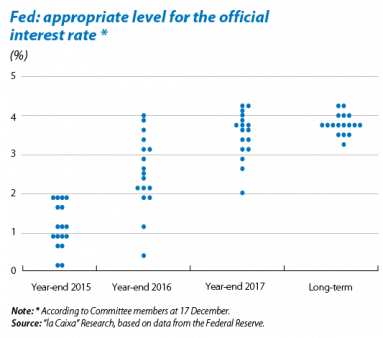 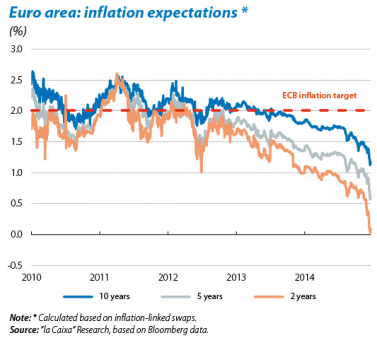 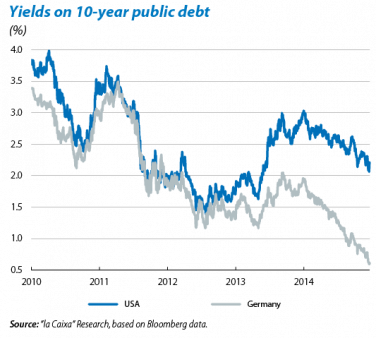 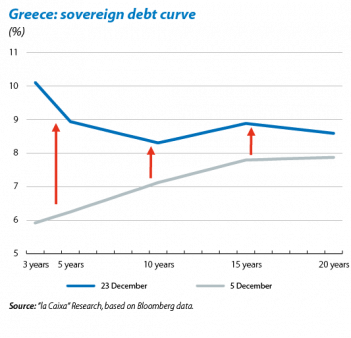