Price formation in financial markets: between reason and emotion

Throughout our lives we face a series of dilemmas which are often dealt with almost automatically whereas other, more complex choices require greater attention. Understanding the decision-making process that lies behind choosing whether, for example, to consume or to save, to invest in bonds or in equity or even to buy or rent our home is a complex but crucial task for handling our finances. The emergence of behavioural finance in the final decades of the 20th century has introduced concepts from the field of psychology to help determine how we take such decisions. This trend contrasts with the classic financial paradigm in force until now, based on rationality. Both disciplines have significantly improved our understanding of how asset prices are set, an insight which may be of great help given the warning voices of the possible formation of bubbles in some areas.

The awarding, in 2013, of the Nobel Prize for Economics to three authors with very different approaches to asset valuation, namely Eugene Fama, Robert Shiller and Lars Peter Hansen, highlights the importance of this concept within financial theory. The first of these three, Fama, can be considered as one of the most renowned voices among those in favour of the traditional paradigm. This theoretical approach defines economic agents as rational; i.e. they correctly process the information available in markets and, based on this, take optimal decisions. As part of this framework, in 1970 Fama coined the concept of an efficient market, defining it as a market in which «security prices reflect all available information».1 In other words, in an efficient market the price of an asset will always be equivalent to its fundamental or intrinsic value, understood as the present value based on all discounted future income. The reason is simple: any deviation in an asset's price from this fundamental value represents an opportunity for arbitrage (i.e. producing a profit without assuming any risk) for rational investors and, on carrying this out, they immediately return the price to its equilibrium level.

The main achievement of traditional financial theory has been its capacity to explain, based on a relatively simple conceptual framework, some of the forces underlying the mechanism of price formation for assets. One clear example of this is the Capital Asset Pricing Model developed by Sharpe in 1964.2 This model intuitively explains the dilemma faced by investors, namely the choice between the potential risk and return of a portfolio, whereby the latter can only increase if investors are prepared to take on a higher associated risk.

However, empirical evidence has shown that this rational paradigm is considerably limited in explaining the behaviour observed with asset prices. One of the first authors to reveal such problems was, in 1981, another Nobel prize-winner Robert Shiller, who showed the inability of traditional models to explain the high degree of volatility in stock market indices.3 Many economists believe this study marks the beginning of behavioural finance. Since then numerous publications have identified episodes in which share prices have deviated significantly from their intrinsic value, questioning the overall validity of the traditional financial paradigm. Indeed, the first decade of the 21st century provided countless examples of such deviations, firstly with the appearance of the dot.com bubble and then the housing bubble in some developed countries.

The advances observed over the last few decades have placed behavioural finance as a possible alternative to classic financial theory in terms of explaining how asset prices are formed. Its key difference to the traditional paradigm is its relaxation of rationality standards for market participants. To this end, it identifies several cognitive dysfunctions that affect how individuals make a decision. One initial dysfunction comes from prospect theory, based on the empirical studies carried out by Kahneman and Tversky on the decision-making process of individuals in uncertain situations.4 According to their findings, individuals evaluate potential losses and gains very differently. In particular, there is a natural tendency to avoid a loss rather than make a gain (also known as loss aversion). Other dysfunctions are related to the tendency of individuals to overestimate their ability to make future projections (overconfidence) and to follow the strategies employed by the majority without considering whether these are logical (herding).5

However, the existence of cognitive dysfunctions is not enough to explain such deviations in asset prices. In fact, as has already been mentioned, although the vast majority of market participants are biased when taking decisions, the fact that there are also rational participants should return prices to their fundamental value. Consequently, for participants' bias in decision-making to result in deviations of asset prices from their intrinsic value there must also be limits to the arbitrage capacity of rational participants. Economics literature provides numerous examples of this. One of these is that markets are not complete, so investors do not know which assets can help them to implement an arbitrage strategy without taking on additional risks. On other occasions the cost of arbitrage is high, either operational due to trading costs or because of the costs involved in obtaining the necessary knowledge in order to carry out arbitrage. One final element that helps to explain the limits to arbitrage can be summed up in the words of John Maynard Keynes: «The market can remain irrational longer than you can remain solvent». In other words, should the deviation in the asset price continue for too long, such a strategy could incur considerable losses for arbitrageurs and might ultimately impede arbitrage.

One example that illustrates this concept perfectly is the famous case of Royal Dutch and Shell Transport. In 1907, both companies decided to merge and allocate their profits on a 60:40 basis but they continued to exist as legally separate entities and were listed separately on international stock markets. They also agreed to pay out their dividends in the same proportion. According to classic financial theory, the relative market value between both companies should always remain constant and in line with this ratio. Therefore rational investors should have taken advantage of any deviation for arbitrage, buying any relatively cheap shares and selling expensive ones, thereby bringing prices back to their equilibrium value. However, as can be seen in the graph, this was not the case: the deviation between the relative share prices exceeded 10% on many occasions. Does this mean there is no such thing as a rational participant? No. In fact, numerous hedge funds attempted to exploit the potential arbitrage between both companies. However, the fact that these deviations remained high between 1993 and 1999 meant that most of these funds saw huge losses.

In short, although behavioural finance is not a mature discipline yet, it has helped to explain the deviation of asset prices from their intrinsic values. Nevertheless, it is unlikely to completely replace the paradigm of traditional financial theory. The bulk of the evidence suggests that both theories are therefore required, since emotion and reason form part of the very nature of human beings.

3. See Shiller, R. J. (1981) «Do stock prices move too much to be justified by subsequent changes in dividends?», American Economic Review.

5. For more information, see the article «Portfolio management: from theory to practice» in the Dossier in this Report. 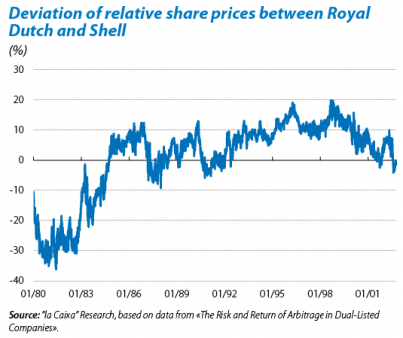 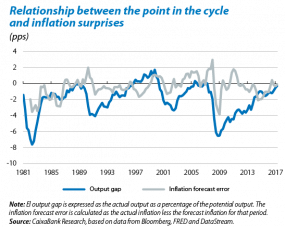