Signs of strength in an environment affected by political uncertainty

Stability has been the predominant note in the global financial environment during the summer, contrasting with the experience of previous years. Perhaps the most notable aspect is the speed with which risky asset prices have recovered after the initial unease following the outcome of the referendum in the United Kingdom (Brexit), as well as the low levels of implied volatility resulting from the slump recorded in the weeks following this event. In fact, the response by global markets to such a shock of uncertainty was, in broad terms, orderly. Unlike past episodes of stress (the collapse of Lehman Brothers in 2008 and the European sovereign debt crises in 2011 and 2012), this time the mechanisms that amplify and fuel such turbulence were not activated, leading investors to discriminate based on asset type and geography according to Brexit’s expected impact on the underlying fundamentals of each asset and the political risk of each region. This situation can be observed in the achievement of new stock market records in the US and the lethargy of the European stock markets, affected by renewed pressure on the banking sector.

The recovery in asset prices is spreading although the rates of increase vary. Most international stock markets are now above their pre-referendum levels (23 June) and the risk premia for corporate debt have reversed their post-Brexit upswings. The US stock market has recorded growth of 2.6% since then and the UK stock market has gained 3.4% while, in the euro area, the stock market has fallen slightly by –0.5%. We should particularly note the trend in emerging stock markets, much less exposed to developments regarding the UK’s place in Europe, with gains of close to 8%. Nonetheless other spheres of the markets are finding it more difficult to make up their losses, although the underlying trend is positive. This is the case of the peripheral stock markets such as Italy (–7.5%) and Spain (–3.5%), as well as the banking sector of the euro area (–9.3%). Meanwhile the price of a barrel of Brent oil fell again to 42 dollars but then recovered, reaching around 50 dollars by the end of August. Nonetheless these recent fluctuations in crude oil are due more to changes in expectations regarding the rebalancing of oil supply and demand than to Brexit-related events.

There is a lot of «noise» and uncertainty resulting from Brexit but global macroeconomic fundamentals remain relatively solid. The realisation by investors that the economic slowdown resulting from Brexit will be limited almost entirely to the United Kingdom has provided clear support for the positive tone in markets. In this respect cyclical indicators have come as a positive surprise in the euro area and the US, in spite of the latter’s weak GDP figures for 2016 Q2. Two additional factors have also helped this positive climate. Firstly, the absence of surprises in the activity data from key countries such as China. Secondly, the messages and actions of central banks during the summer which, although they have not essentially altered their respective strategies, have acted as a safety net.

In the sphere of central banks, the Bank of England (BoE) surprised by announcing an ambitious package of monetary stimuli. After delaying action until it had more information at its meeting early in June, the British monetary authority did not hesitate at its latest meeting. The BoE announced it would launch various expansionary measures with the aim of putting an end to the risks hanging over the country’s economy. The governor of the BoE, M. Carney, announced a 25 bps cut in the official interest rate to 0.25%, widely discounted by the market. But the actions taken in the sphere of unconventional monetary policy came as a greater surprise. The BoE will resume its sovereign and corporate bond purchases, totalling 70 billion pounds, and will set up a loan facility for banks of 100 billion. A series of measures similar to those recently implemented by the ECB except for one important difference: Carney stated he was against adopting a negative interest rate policy, a stance which calmed down the financial sector in the stock markets.

For its part the Federal Reserve (Fed) has adopted a conservative stance and stressed that normalisation will take place very gradually. The US central bank’s meeting at the end of July did not provide any huge surprises. In spite of the official memorandum’s conservative tone, the Fed noted the decline in risks resulting from Brexit and underlined the strength of the labour market. This suggests the Fed is keeping the door open to raise interest rates before the end of the year, in line with our scenario which places the second Fed funds rate hike in December. Yellen also spoke along the same lines at the annual economic policy symposium in Jackson Hole (US), where she stressed that the conditions to carry out another interest rate hike (the trend in employment and inflation) have strengthened over the last few months.

On the other side of the Atlantic, the ECB decided to remain on hold although Draghi repeated its willingness and capacity to act if necessary. The European authority preferred not to rush matters and mentioned the need to gather more information regarding the impact of Brexit on the euro area’s macroeconomic scenario. It will be at the beginning of September when the ECB updates its forecasts for growth and inflation. However, we do not expect the authority to announce any new accommodative measure beyond possibly introducing some adjustments to the programmes already implemented.

In the area of sovereign bonds, risk-free interest rates continue to fall. Unlike the stock markets, long-term sovereign yields for the US, Germany and the United Kingdom have not managed to completely reverse the sharp falls observed after Brexit. In these last two countries, yields on 10-year bonds in secondary markets have once again reached all-time lows of –0.19% and 0.54%, respectively. It therefore comes as no surprise that, given this situation, sovereign bond assets have produced considerable returns. Peripheral debt in general, and Spanish debt in particular, have also been affected by this sharp drop in interest rates. For the first time in its history the yield on Spanish 10-year bonds has fallen below 1% and the risk premium for the same maturity is around 100 bps. It should be noted that these last two developments have occurred in spite of the current context of political uncertainty and warnings by the European Commission regarding challenges for the country in terms of budgetary adjustment.

The stock markets embark on the last part of the year with a combination of hope and caution. There has been a considerable chain of unfavourable events on the international financial scene throughout 2016 while their timing has coincided with a relatively substantial corrective phase in US corporate earnings. However, the panorama is expected to be more promising in the short and medium term with an increasingly positive contribution from corporate earnings for the coming quarters. In fact technical and sentiment indicators point to the US stock market’s rally in the summer representing the start of a sustained upward phase rather than a temporary upswing. The situation has been clearly less favourable in Europe, however. In addition to its cyclical lag compared with the US market there are another two factors: firstly the poor performance by corporate earnings and, secondly, the legacy of uncertainty due to Brexit, which has exacerbated the fragility of investor sentiment towards the banking sector, although it is important to note that this is not so much related to the solvency of banks. In this respect, the stress tests of the European Banking Authority (EBA) have confirmed appreciable levels of resilience, the weak links being limited to a few Italian banks. The main source of doubt is primarily the sector’s difficulty in generating acceptable levels of profit in the current monetary-financial and regulatory environment.

Geopolitical risks emerge as an important factor for volatility in the short and medium term. The predominantly calm climate in international markets should not make us forget the long, complex negotiation process that will end up with the United Kingdom effectively leaving the EU. At the same time an autumn full of potentially destabilising political events will more than likely keep political uncertainty at a high level (regarding this issue, see the Focus «Uncertainty and stock markets» in this Monthly Report). Specifically, repeated elections in Austria, referendums on immigration policy in Hungary, the reform of the Italian Senate and presidential elections in the US suggest we should not let down our guard. 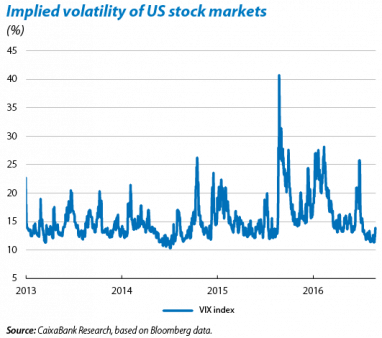 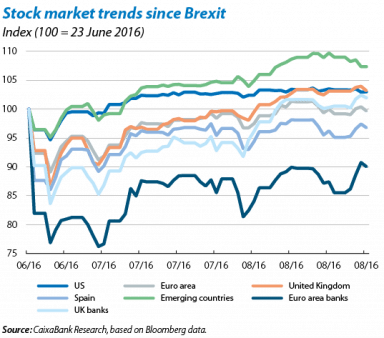 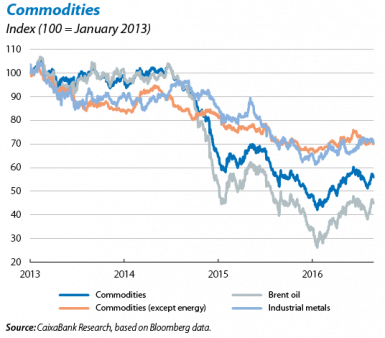 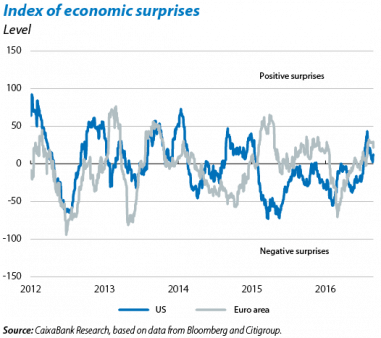 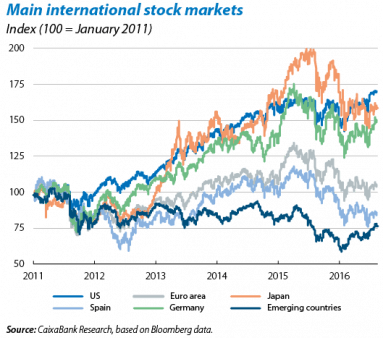