Core inflation started to pick up in the euro area as a whole as from the beginning of 2015, in line with the improvement in economic activity. This promising trend has not been replicated in the last few quarters, however. This article analyses the trend in core inflation in the main euro area countries and shows how it depends on the cyclical position of the economy, particularly in the periphery, and on the indirect effects of oil.

As can be seen in the first graph, while Germany has above-average levels of core inflation (over 1% during the last year), Spain, Italy and France all have much lower levels. This disparity can largely be explained by the different cyclical position of the economies in the euro area. While Germany is close to full employment, a situation which tends to push up wages and ultimately the price of goods that make up the underlying consumer price index, the other three countries still have relative high unemployment rates (10.3% in France, 11.6% in Italy and 18.9% in Spain). As activity grows in the coming quarters, this is likely to lower unemployment rates and core inflation will probably recover as the European periphery approaches a cyclical position more similar to Germany’s. Moreover, the disappearance of the indirect effects of oil prices, which have kept core inflation low over the last few months, should also be added to this scenario.

Based on CaixaBank Research’s forecasts for GDP growth and unemployment rates in each country, as well as for oil prices, we can calculate the likely contribution made by each of these factors to the recovery in core inflation for the euro area as a whole.1 Specifically, we have broken down core inflation into two scenarios. The first (the «activity scenario») shows how the recovery in economic activity will affect core inflation. More specifically, we expect a gradual reduction in the unemployment rate in France and Italy between 2016 and 2018 (–0.8 pps for France and –1.4 pps for Italy). In the case of Spain, although a larger drop in unemployment is expected (–3 pps), the level will still be relatively high (16.2% in 2018 Q4). The second scenario («activity scenario + indirect effects of the energy component») includes the indirect, second round effects of the expected price of oil.2

As shown by the second graph, in the «activity scenario» the recovery in economic activity in the different countries results in core inflation approaching 1.3% by the end of 2018 for the whole of the euro area. Moreover, when the indirect effects of the recovery in the energy component are included, in «activity scenario + indirect effects of the energy component», core inflation speeds up to 1.5% by the end of 2018.3

Although core inflation is not an official target for the ECB, in practice it indicates the underlying trend in headline inflation and is therefore a relevant variable in monetary policymaking. As we have seen in this Focus, core inflation will pick up in the coming quarters but will still remain far from the ECB’s target. 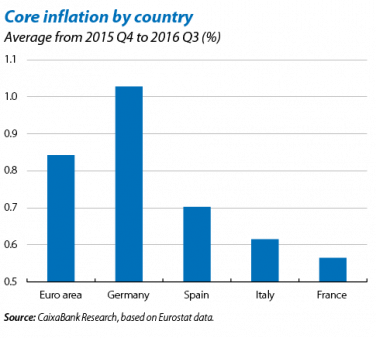 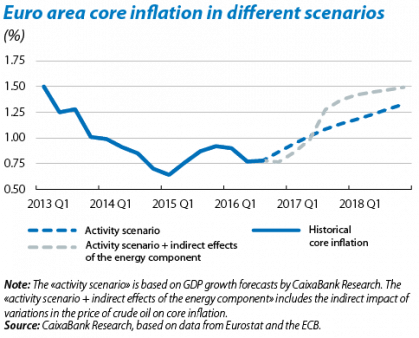