Inflation will gradually recover in the euro area

Although euro area growth has been strong and its unemployment rate has been falling, inflation has yet to pick up. In the past, inflation tended to have a negative correlation with unemployment, known as the Phillips curve. However, in the current phase of the recovery this relationship seems to have weakened, even to the point of disappearing entirely. Nevertheless, as we will see, there are signs that the Phillips curve has not died and that the low inflation recorded over the past few years is transitory.

For greater insight into this change in the pattern of inflation, we have analysed the relationship between the unemployment trend and the different subgroups that make up the core HICP.1 Specifically, following the method of Mahedy and Shapiro (2017),2 we separated the different core HICP components into two groups: procyclical components, which had a negative correlation with the unemployment rate before the financial crisis, and the rest, which we shall consider acyclical.3 Procyclical components include food and alcoholic beverages, restaurants and those related to household goods and services. Acyclical components include those related to clothing and different medical services, among others. Procyclical components account for 49% of the HICP basket compared with 51% for the acyclical group. Having classified the components, we can now calculate the price trend for both types.

If we look more closely at the price trends of the main components in the basket of procyclical goods, we can identify those with the most anomalous behaviour. For each of these we calculated the difference between the observed price and the price predicted by the Phillips curve (the price we would expect to see given the trend in the unemployment rate). As shown by the third chart on the previous page, the components of the basket of procyclical goods with the weakest price trend (compared with the Phillips curve projection) are repairs and maintenance of different goods, housing running costs (excluding rent) and restaurants. These explain 25%, 34% and 42%, respectively, of the difference between the observed procyclical inflation and expected inflation given the unemployment rate. In addition to being procyclical, these three types of goods share another feature: they belong to labour-intensive sectors.

This feature might explain the weaker procyclical component prices. The reason why this may have happened is simple: the price of goods whose production is more labour-intensive tends to be more sensitive to wage changes, and vice versa. And during the current phase of economic recovery, wage growth has actually been more contained than usual.

To verify to what extent this weakness in inflation is due to moderate wage growth, we have classified the components of the core inflation basket according to the labour intensity of their production.4 As expected, highly labour-intensive components explain most of the difference between real inflation and that projected by the Phillips curve. It is also interesting to note that the production of most of the goods in the procyclical basket is highly labour-intensive, specifically the 52%, while the opposite happens in the acyclical basket of goods whose production tends to be less labour-intensive.

Broadly speaking, the reason for inflation’s slow recovery in the euro area is therefore mostly because of the slow recovery in wages. Previous Focuses noted that the euro area’s labour market is less saturated than would be expected given the unemployment rate (see, for example, «Beyond the unemployment rate», in MR12/2017). Factors such as the increase in labour underutilisation and in the inactivity rate occurring during the recession, which are not reflected in the unemployment rate, have eased pressure on wages. However, these articles also noted that, given last year’s good GDP growth, which is expected to continue this year, the underemployment rate has gradually fallen. As this trend consolidates, the pressure on wages and ultimately on inflation should recover.

3. We have used euro area data between January 2002 and December 2008, the period when the Phillips curve behaved normally. Since more historical data are not available for the euro area, we have carried out the same exercise for Germany and France, countries which have data from 1991. We have therefore been able to verify that there is no significant change in the classification of components into acyclical and procyclical.

4. To do so, we obtained the percentage of labour costs out of total production costs for various sectors from Eurostat. 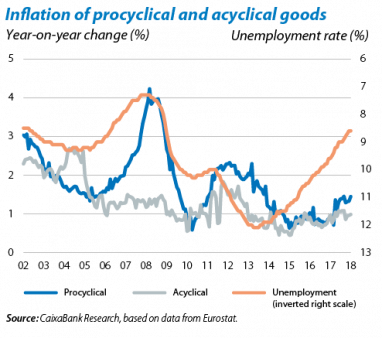 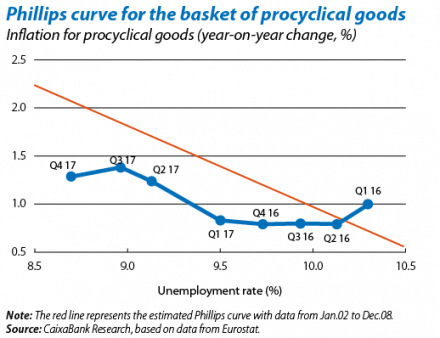 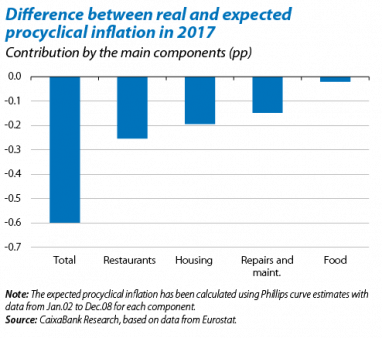 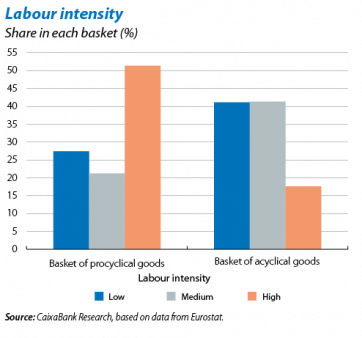