The ageing of the population will be one of the key factors, together with the technological revolution and climate change, that will redefine our societies in the coming decades. An older population will not only change the configuration of our societies but also that of our economies, since the ageing of the population has a significant impact on economic growth. This is the matter that we will address in this and the following articles of the Dossier, with a focus on the Spanish and Portuguese economies.

Ageing affects economic growth by reducing the labour force, but it also does so by reducing its productivity

In a context of population ageing, the main factor that can directly hold back an economy’s level of production is the reduction of the labour force. In the absence of significant changes in the employment rates of the older population, a decline in the working-age population will reduce the aggregate labour force and, therefore, the economy’s overall capacity for growth. Similarly, if there is a reduction in the relative weight of the working-age population relative to the population as a whole, this will also decrease the growth in GDP per capita.

On the other hand, ageing also affects the economy’s aggregate productivity, since each age group has a different set of abilities and skills. Changes in the population’s age structure affect the composition of its aggregate skills, which can translate into changes in labour productivity. As shown in a recent study by the Bank of Spain,1 older workers have greater planning and interpretation skills, whilst their physical, writing and numerical skills decrease. Also, according to some studies, companies with older workforces are more risk averse when it comes to making investment decisions and have fewer incentives to adopt technological changes, which can end up causing them to be less productive.2

The reduction in the birth rate is the main factor behind this ageing, as it narrows the lower part of the population pyramid. As far back as the beginning of the 1980s, in both Spain and Portugal the fertility rate stood below the replacement rate (the rate that would allow the total population to remain constant without immigration, which is around 2.1 children per woman). Since the 1990s, it has stood well below this threshold, at around 1.3 children.4

The ageing of the population has a particularly marked effect in the regions of the so-called «empty» Spain and «deserted» Portugal, as the areas that have suffered from significant depopulation in recent years are popularly known.

The main reason for this is that, for several decades now, a significant portion of the population, mostly of working age, has been emigrating from these areas towards the country’s main urban centres (in Spain, located in coastal areas and in Madrid), creating a key demographic imbalance between regions. Starting from the 2000s, however, foreign immigration offset part of this imbalance, and today almost all autonomous community regions are net receivers of immigrants to a greater or lesser degree.7 However, this immigration has not been able to fully compensate for the loss of population that the regions of the so-called empty Spain and deserted Portugal continue to suffer. An inevitable consequence of this is that, at present, only four autonomous communities (Madrid, Murcia, the Balearic Islands, and Ceuta and Melilla) have a positive natural growth rate (i.e. the difference between the total number of births and deaths), and in some regions such as Galicia and Castile and León it is particularly negative. In contrast, in the early 1980s, in all autonomous communities there were more births than deaths.

Moreover, within any given region, depopulation affects rural areas in particular, and it is precisely in the regions of the so-called empty Spain and deserted Portugal that we find many such areas. As such, population ageing in the rural parts of these regions is even higher than it is in urban areas, posing a huge social challenge.8

These regional differences in the ageing of the population can be seen more clearly when we look at the ratio of the population aged 60 or over compared to the adult population as a whole (aged 20 or over). Indeed, this is the key variable we will use to analyse the impact of ageing on economic activity in the following articles. This ratio increased in Spain from 23.6% in 1981 to 30.9% in 2017, and in Portugal it went from 27% in 1991 to 35% in 2017. This increase was especially pronounced in the depopulated regions of Spain and Portugal (see first chart). In 2017, regions such as the Basque Country, Asturias, Galicia, and Castile and León (and the Alentejo and Central regions of Portugal) registered ratios above 35%, while in the Canary Islands, the Balearic Islands and Murcia in Spain (and in the Azores and Madeira in Portugal) the ratio stood at around 26% (for more detail, see the full results in the table).

Spain and Portugal are more prosperous countries than in the past, but there is greater economic inequality between their regions

The regional differences are even more pronounced in the economic sphere than in the demographics. The well-being of all regions of Spain and Portugal has increased substantially in the last 40 years: GDP per capita in real terms stood at around 30,000 euros in 2017 in Spain (23,000 euros in Portugal), whereas in 1981 it was below 20,000 euros (11,500 euros in Portugal). However, whilst we now enjoy higher levels of GDP per capita, the relative differences between regions has not diminished. At the top end of the scale, in 2017 GDP per capita in Madrid remained 37% higher than the average for Spain (the same percentage as in 1981); that of the Basque Country, 30% higher (+19% in 1981), and that of Catalonia, 20% higher (+17% in 1981). At the bottom of the scale, GDP per capita in Andalusia was 24% lower than the average in 2017 (–20% in 1981) and that of Castilla-La Mancha, 20% lower (–24% in 1981). On the other hand, some autonomous community regions such as Aragon now have a higher-than-average GDP per capita, while Asturias and Cantabria are below the average, whereas in 1981 the well-being of these three regions stood at around the average.9

In the remaining articles, we will analyse how ageing affects economic growth in Spain and Portugal; we will then measure what portion of this impact is in response to changes in the size of the labour force and what portion is due to changes in labour productivity and, finally, we will discuss what policies can be implemented to counteract the impact of ageing.

4. According to the basic demographic indicators of the National Statistics Institute of Spain.

7. With the exception of Extremadura, and Ceuta and Melilla. 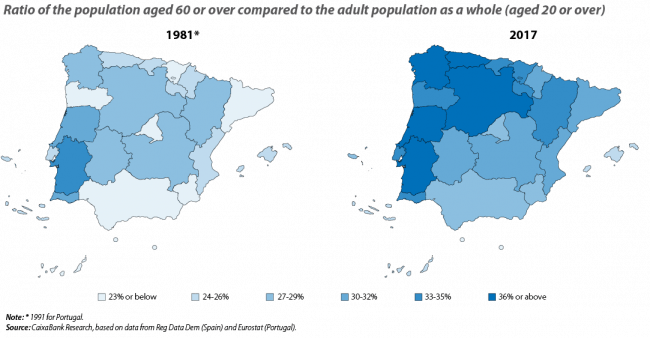 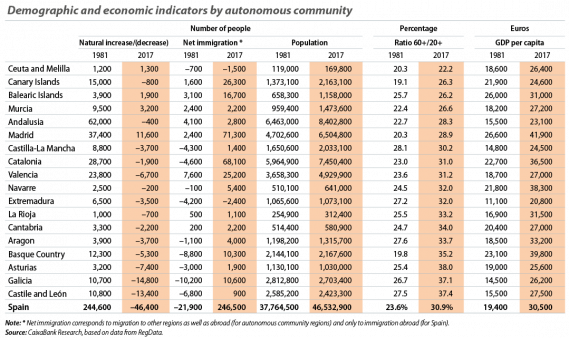 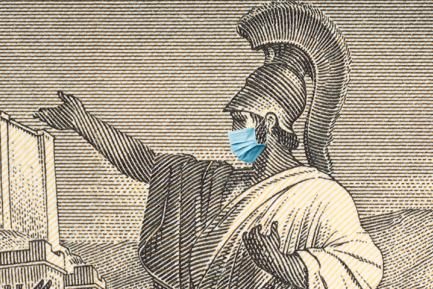