The cost of city life: the diseconomies of agglomeration

All of us who live in a city or interact with them in some way realise that, in spite of the many advantages, city life also has some drawbacks: traffic, crowds, pollution, the cost of housing, etc. This article examines the negative effects of the geographical concentration of economic activities and population or, in academic terms, the diseconomies of agglomeration.

By way of introduction we should first point out that the drawbacks associated with city life can differ depending on the type of city. A horizontal sprawling city with a lower population density, such as Los Angeles, has higher associated transport costs whereas in vertical, more compact cities with a much denser population, such as New York, house prices tend to be higher. Such cost differences, monetary or otherwise, are an important factor when it comes to understanding why cities come in so many different types and sizes.

The major monetary cost associated with agglomeration is undoubtedly housing. We all know that a home in a large city is more expensive than in smaller towns. In Barcelona, for example, the price per square metre is three times that of towns such as Manresa and El Vendrell. This difference, which is significant if we consider that the cost of housing accounts for 32.4% of a household's total expenditure,1 is largely due to the fact that receiving a larger salary is easy in a city as explained in «The urban factor of the labour market» in this Dossier). Consequently people are willing to pay more for housing in urban than rural areas. Naturally the responsiveness of the housing supply in each city is also decisive.2 In particular, the supply of homes in cities with more restrictive land regulations responds less rapidly; i.e. it is more inelastic and the price of housing tends to be higher.3 This is the case of London, for example, whose town planning regulations limit the availability of land, making it one of the most expensive cities in the world.4 For the whole of the United Kingdom, a recent study estimates that, with more flexible regulations, between 1974 and 2008 real estate prices would have grown by 90% instead of 190%.5

A second element that also needs to be taken into account is the higher cost of mobility in large cities. Returning to the case of the United Kingdom, it has been estimated that, if the time invested in commuting were valued at the same rate as the time devoted to working, the cost of commuting would represent 19% of the average wage.6 The cost of transport is therefore closely related to the real estate market. In fact, the price people are willing to pay for a home depends, among other factors, on the associated commuting costs: the closer a home is to a city's services, the more expensive the property because less time or money will be spent on travel, as shown in the graph.

Thirdly, cities tend to have higher crime rates. Economic literature has documented the existence of a positive relationship between crime rates and the size of a city. Moreover, spending on security and the level of precaution of potential victims is greater in cities.7 The cost this entails is not insignificant. For example, the economists Cullen and Levitt (1999)8 estimate that, in the US, a 10% increase in delinquency in a city involves a 1% reduction in its population. Higher educated households and homes with children tend to be the most sensitive to this factor. Although this cost has gradually fallen in the last few years, particularly in US cities, it is still a considerable problem in many cities in developing countries.

Lastly, one of the big problems historically associated with agglomeration is pollution. A recent study by the WHO warns that more than 80% of the people living in urban zones are exposed to pollution levels above those recommended by this organisation. However, the study notes that more advanced economies have lower air pollution levels9 thanks to stricter environmental and health controls and the tertiary nature of their economies.10 As developing economies progress we should therefore expect their air pollution levels to improve as well. It is also important to point out that CO2 emissions per capita and the ecological footprint11 tend to be lower in large cities, as shown in the graph. This also suggests that pollution will fall over the coming years because, as mentioned in the article «Towards an increasingly urban world» in this Dossier, the urban population is expected to grow significantly. However, another drawback to urban life related to health, and one which has come to the fore over the last few years, is stress. Several studies are investigating the relationship between city life and mental disorders, with mixed results so far.12

With a view to the future, technology will play an important role in containing the costs of agglomeration. The new concept of smart cities, which aims to improve the quality of life in cities by incorporating technology in urban services such as the management of traffic, transport and waste, will help to considerably reduce the costs of transport and pollution. Technology therefore represents an opportunity to transform the current model of city and make it even more appealing.

2. Glaeser, E. L. (2007), «The economic approach to cities», NBER Working Paper No. 13696 argues that the differences in housing supply seen in the US are due to barriers to new construction.

3. Land restrictions tend to be justified due to reasons of efficiency and to avoid negative externalities. See Duranton, G. and Puga, D. (2015), «Urban land use», Handbook of Regional and Urban Economics, Vol. 5, 2015. Amsterdam: North-Holland, 467-560.

10. Kahn, M. E. (2010), «New Evidence on Trends in the Cost of Urban Agglomeration», Agglomeration Economics, The University of Chicago Press.

11. The ecological footprint measures the space required to provide the resources and absorb the waste of a specific population or economy over one year. See Rees, W. and Wackernagel, M. (1996), «Ecological Footprints and appropriated carrying capacity: measuring the natural capital requirements of the human economy», Investing in Natural Capital: The Ecological Economics Approach to Sustainability, Island Press, Washington. 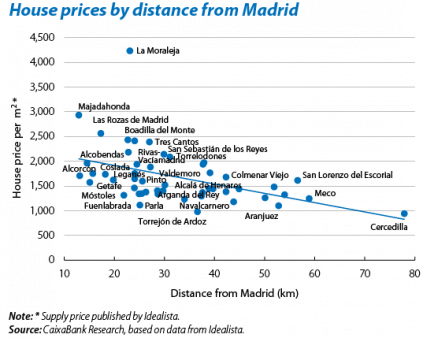 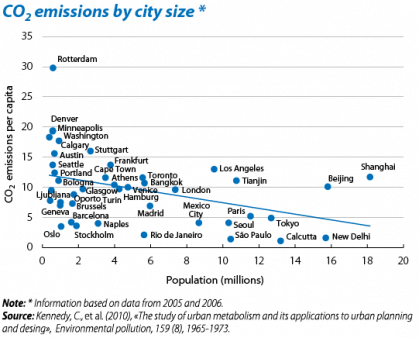