During the recession, those sectors1 exporting the most2 and with a larger concentration of large firms3 performed better in terms of employment. In 2013, in the sectors analysed with more than 50% of their sales abroad, the average annual rate of change in employment was positive (6.1%) while, in those industries with a lower share of foreign sales, jobs were still being lost on average (–5.7%). This gap has narrowed in 2014 as the recovery in domestic demand has helped to increase new jobs in sectors that are more dependent on domestic consumption. Nonetheless, there can be no doubt that internationalisation and larger firms help to create jobs. But what kind of jobs do such sectors generate? The number is important but so is quality.

In 2013, those sectors selling more than 50% abroad had a markedly higher ratio of employees with permanent contracts than the rest (7.9 p.p.). This ratio was also higher in sectors with at least 50% of all turnover produced in firms employing more than 250 workers (7.0 p.p.).

Regarding wages, the situation is once again more favourable for those industries with more exports and larger companies, judging by the data from the Annual Labour Cost Survey for 2013. For example, on average workers in export-intensive industries received a salary of 36,690 euros while the annual wage for the least export-intensive group was 24,260 euros.

Given the higher wages in the sectors in question, it comes as no surprise that they also tend to have more workers with a higher education. According to data from the labour force survey for 2013, 51.3% of workers in highly export-intensive industries had completed higher education (13.3 p.p. higher than the rate for the rest). This advantage, albeit smaller (4.4 p.p.), can also be seen when sectors are compared in terms of company size.

In short, the relatively better progress made by the labour market in more export-intensive sectors and larger firms is not limited to the quantity of employment but also relates to its quality. Any economic policies aimed at boosting internationalisation and encouraging firms to grow will therefore be very welcome.

1. It should be noted that only some industrial and service sectors are analysed, namely those where enough data are available to classify them in terms of their export intensity and company size. These employed 44% of all workers in 2013.

2. See the Focus «Internationalisation: an opportunity for employment» in MR12 (2013). 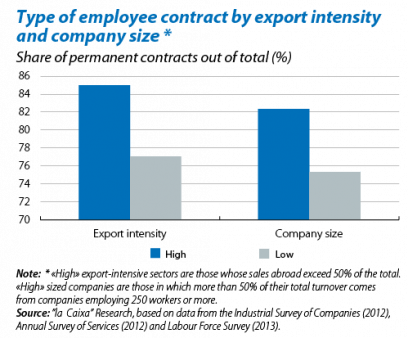 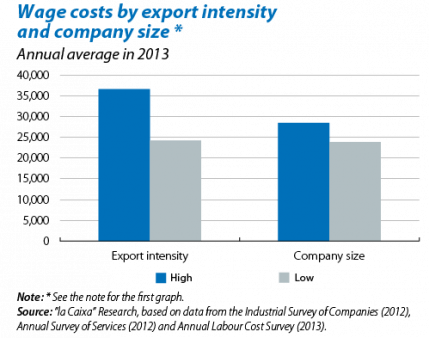 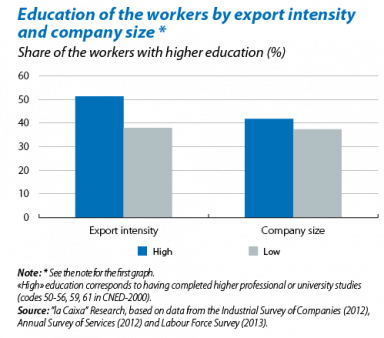