Millennials and politics: mind the gap!

Dear reader, without wishing to appear rude, may we ask how old you are? No, do not answer just yet. Rather, tell us if you believe the following statements describe your beliefs more than those of society as a whole. You would not say you are a religious person, you would be very willing to donate money to help the environment, marriage is an outdated institution, you approve of «single mothers» and strongly oppose the idea that men make better political leaders than women. If you are rather more in agreement with these statements than society at large, then it is likely you were born between 1981 and 1996. In other words, you belong to the Millennium generation. But we can go into even more detail. Let us now do the same with the following statements: you have no interest in politics, you have never signed a petition in favour of a cause and you have no confidence whatsoever in political parties. If you firmly agree with these statements, and more so than the population as a whole, then there is a big chance you are a Millennial. Numerous opinion polls and sociological surveys have repeatedly come to the same conclusion; namely that Millennials are not interested in politics, even compared with a society that, as a whole, is also paying less attention to political issues.1

Could it be that the only truly generation-specific feature of Millennials is their disaffection with politics, this being understood in the classic sense of parties competing within a democracy that consists of voting when elections are held? Let us not come to any hasty conclusions. The fact that someone born between 1981 and 1996 does not seem to be very interested in politics may not have anything to do with being born at a specific time and, consequently, under certain socio-economic and cultural circumstances. It might simply be that they are young and, oh sacrilege, their parents were also non-conformist at the same age and believed the system only reflected some of their beliefs. It is therefore obvious that this question, namely how different the generations are, cannot be answered by comparing contemporary opinion. We have to look at standardised ages. For example, comparing what today’s Millennials think, people aged from 22 to 37, with their equivalent from previous generations. In other words, what Generation X thought around 1995 and the Baby Boomers around 1980. But this is still not enough. We must also remember that society has changed as well. Being against politics in an apolitical society is not the same as being against politics in a society where this represents an extreme position and not participating is seen as disruptive.2

We therefore need to look at what the figures say and whether Millennials really are so different. In those areas where three generations can be compared (Millennials, Generation X and Baby Boomers), and concerning values related to fundamental aspects of society, the main conclusion is that, although there are differences between the first two generations, these are not so great. Both groups have a relatively similar view of religion, the role of women and the environment, as well as a similar tolerance of immigrants and willinguess to fight for their country. On the other hand, there is a much more appreciable difference between Millennials and Baby Boomers. Although less information is available, it can be assumed that Baby Boomers, compared with Millennials, would tend towards values associated with more conservative views of society, with greater confidence in marriage, more religious and believing that women should take on more traditional roles.

In short, Millennials are not so different in terms of how they see essential aspects of society compared with members of Generation X. But what happens when we analyse their relationship with the political system? We have already mentioned their detachment from all political issues in contemporary surveys. This is still the case when we compare Millennials with their age equivalents in preceding eras and with the society of that time (as we have already said, the aim is to eliminate any bias, albeit simply, that comes from being young and changes in society as a whole). Millennials are considerably less interested in politics than those from Generation X and this discrepancy is even greater when we look at how they participate. Millennials have less confidence in political parties than Generation X, as well as in the use of petitions and participation in demonstrations. The gap widens even further with Baby Boomers, who were more interested in politics and used the alternative means proposed to a greater extent (they were not asked about their confidence in political parties, in itself indicative of the assumptions of the age).

So Millennials’, shall we say, awkward relationship with politics is a characteristic feature of their generation. A conclusion that is important to remember. But let us delve a little deeper. One of the key elements of the issue analysed by this article, namely the relationship between Millennials’ social values and their political attitude, is what this generation’s values are like in conventional ideological terms; i.e. how they are positioned on the left-right spectrum. When Millennials are asked where they would place themselves on a scale ranging from 1 (far left) to 10 (far right), the dominant positions are central with a slight slant towards the left. Although today’s society in general (always using advanced countries as a whole as our benchmark) is also centre-left, Millennials lean somewhat more to the left than their fellow citizens. But the aforementioned logical criticism for values is also relevant here. What if «being left-wing» (or a little more left-leaning) is part and parcel with being young, and afterwards we tend to become more conservative?

To improve our analysis, we have once again compared previous generations when they were the same age as Millennials today and with the society of that time. The main conclusion is that Generation X was slightly more left and quite a lot more centre (and therefore much less right) but it was much less left-leaning than the Baby Boomers. Regarding this point, namely the continuation of ideologies, one last pertinent question is related to what we might call «extremism». Are Millennials more «extremist» than preceding generations? In order to answer this question, we will compare the «populous» at the extreme positions of the scale of ideological beliefs. When we compare Millennials with Generation X, we can see that the former are indeed more «extremist» than the latter. The figures also suggest that neither of the two positions («1» corresponding to the far left and «10» to the far right) are different. In other words, they are more extreme than the preceding generation but this extremism is almost to the same degree on both the left and the right. In any case, and to avoid reading too much into this «extremism», we should remember that Millennials on the far left or far right are, as happens in all generations for which data are available, a minority (in the order of 10% for Millennials, adding both extremes together).

To conclude our tour of the Millennium generation and their attitude towards politics, we should now look to the future. Given their evident disaffection with the traditional political system, how might politics develop in western countries with traditional democracies? This article does not have the space, or the intention, to answer this question in any depth. However, we might conclude that two major types of change are possible. The first would be that the system gradually evolves, incrementally as it were, so that, as Millennials become more important in electorate terms, traditional parties (or other new parties that appeal to Millennials) may evolve, reducing the distance between political preferences and actual politics. The second may take the form of new ways to participate in a democracy, or the reinvention of how the party system works (and parties themselves). Which situation will prevail, or whether there will be a combination of incremental and radical changes, will depend on many different factors but it is useful to remember one fundamental fact: Millennials, as a generation, will not be the predominant cohort in the electorate, not in the immediate future or in the next few decades. However, insofar as they can establish, de facto, shared agendas with previous and subsequent generations, the «Millennisation» of politics will be an unavoidable reality. These new agendas may be a combined version of the preferences of Millennials with Generation X which, as we have seen, are not so different in many aspects. Or they may be combined with those of the next generation, so young that there is still no agreed name for them, although the term Z has been suggested. Based on the little we know about «Generation Z», they may indeed be different. In any event, notably different social scenarios may come about. And as is almost always the case with important issues, the solution will be intergenerational — or it will not be. 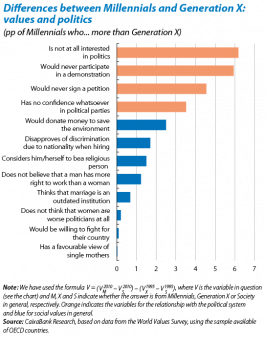