In the second and third articles of this Dossier, we have seen how the ageing of the population has had – and will continue to have – a negative impact on economic growth in Spain. In keeping with the maxim stated by Henry Ford, «Don’t find fault, find a remedy», in this final article we will analyse some of the measures that could help to counteract the adverse effect that ageing will have on the Spanish economy in the coming years.

Increasing the workforce, a task for everyone

To boost growth in the extensive margin in a context of population ageing, the main measures consist of increasing the birth rate, prolonging people’s working lives, increased immigration and greater labour participation of the population. Increasing the birth rate feeds the base of the labour force, but it takes several decades to have an impact. Therefore, we will focus on the last three and we will analyse hypothetical scenarios to determine to what extent they could help offset the negative impact that ageing will have over the coming decades.1

The increase in life expectancy that we are enjoying is so significant that it makes it possible for us to allocate a small part of our extended lifetime to working more, either through flexible retirement to combine retirement and work or by delaying the retirement age.2

On this note, we wonder what increase we would see in the number of people in work per capita and, therefore, in economic growth if, during this decade (2020-2029), the next (2030-2039) and the one after that (2040-2049), the effective retirement age were increased to 66, 67 and 68 years, respectively. In annualised terms, economic growth would be 0.19 pps, 0.27 pps and 0.18 pps higher for each of the respective decades compared with a scenario in which the effective retirement age remained at the current age of 65. If we recall the figures for the negative impact of ageing on economic growth,3 these quantities would mean that this hypothetical scenario of increasing the effective retirement age would offset the negative impact of ageing on economic growth by 27% and 45% in the current and next decade, respectively, and would offset the negative impact in the last decade entirely (since the impact of ageing would be much lower in the period 2040-2049).

The second factor analysed that would help to increase the labour force is immigration. To put the scale of migratory movements in Spain in context, in 2017 the flows of immigrants from abroad who remained in Spain to live accounted for 0.7% of the total population. This figure is higher than that registered by countries such as Italy, Portugal or France, where the percentage stood at 0.4%, but lower than countries such as the Netherlands or Germany, where the figure was 0.8% and 1.1%, respectively. Taking the latter country as a benchmark to build a hypothetical scenario of migration flows, we will examine what increase we would see in economic growth if the inflows of immigrants relative to the total population in Spain were to converge, between now and 2049, with those observed in Germany in 2017. The results show that, in annualised terms, economic growth would be 0.02, 0.12 and 0.15 pps higher in the 2020s, 2030s and 2040s, respectively, compared to the scenario of immigrant flows forecast by the National Statistics Institute.4 This means that this hypothetical scenario of «German-level» immigration flows would offset 3% and 17% of the negative impact of ageing on economic growth in the the current decade and the next, respectively, and would offset it entirely in the last decade.

The last measure that we will analyse in terms of how to increase the labour force is related to the reduction of the unemployment rate – an important issue in Spain given that the unemployment rate (13.9%) is the second highest in the euro area, behind only Greece. It is on this point that we will focus our attention, quantifying by how much economic growth could be boosted with an economic policy that progressively cut the difference between the level of unemployment in Spain and the average level for the euro area (7.5%) in half by 2049. A reduction in unemployment on the scale described would result in economic growth being 0.12, 0.13 and 0.13 pps higher in annualised terms in the 2020s, 2030s and 2040s, respectively, compared to a scenario in which the unemployment rate remained at its current level. Thus, the negative impact of ageing would be reduced by 17%, 22% and 130% in the current and next two decades, respectively.

The three measures analysed that are aimed at increasing the extensive margin of the labour supply help to reduce the impact of ageing. However, the results obtained indicate that their effect is only partial and of varying scope in different periods (see table). Thus, focusing only on economic policies that increase the number of people in work per capita is not enough to offset the negative impact that ageing will have in this decade and the next. It is therefore also necessary to emphasise the other factor that sustains economic growth, labour productivity.

As we have discussed in the third article of this Dossier, a major part of the impact of ageing on economic growth operates through labour productivity. This factor has often been overlooked when talking about ageing, but for Spain it is just as important as the extensive margin, and even more so for Portugal. For this reason, in order to address the impact of ageing, measures that encourage the growth of labour productivity in Spain must be taken into account. The trend followed by labour productivity has been somewhat mediocre in the last two decades, and there has been a long list of reforms seeking to improve it. In a previous Dossier,5 we discussed at length the role that new technologies will have in boosting productivity, especially as applications are consolidated, new business models mature, the training of workers improves and factors of production are reallocated.

Another important tool for facilitating productivity growth is education, both in its formal and in its continuous forms. The latter has a significant role to play in preventing a deterioration in workers’ skills, including among older workers, as well as in improving their ability to adapt to new tasks to be performed within their companies, for instance due to technological change.

If we look at the labour productivity of the older population in particular, a recent study by the Bank of Spain6 highlights how workers’ skills change as they get older. For this reason, workers’ tasks should be reallocated so that older workers continue to have a productive career. An example would be replacing tasks that require more physical effort – and are therefore less suitable for older workers – with new ones that focus on other kinds of skills, such as those related to planning. More generally, increasing and improving not only productivity but also labour opportunities for older workers is a major challenge for society. Indeed, workers, firms and governments must all play their part in tackling this challenge, given that the workforce of the future will be an ageing one.7

In short, the message we must take away is that, although the measures that encourage the growth of the labour force help to reduce the impact of ageing, they will need to go hand in hand with an increase in labour productivity if the aim is to prevent the ageing of the population from taking a significant toll on economic growth.

1. It is important to note that, while they are interesting for our analysis, we must take these simulations with a pinch of salt, since they are based on assumptions that will not necessarily be fulfilled or implemented by public policy makers.

3. See the article «The impact of ageing on economic growth in Spain and Portugal» in this same Dossier.

4. The fact that during the 2020s the increase in economic growth is close to zero is due to the fact that our hypothetical scenario is very similar to the immigration forecasts elaborated by the National Statistics Institute. In contrast, for the following two decades the difference between the two scenarios increases, so the impact on economic growth is greater. 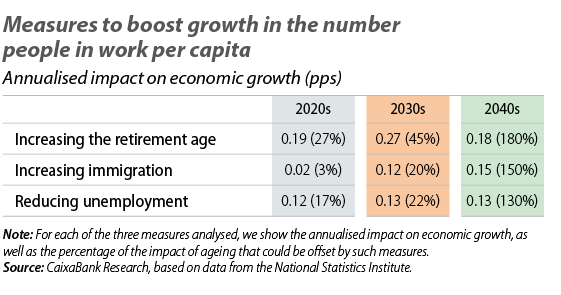