The impact of monetary divergence, the big uncertainty of 2016

The start of interest rate normalisation in the US marks the start of the New Year. Towards the end of 2015 international financial markets suffered from a more volatile climate that ended up marring the already weak tone of the second half of the year. Recurring weaknesses in the commodities market, in particular oil, have clearly hampered the trend in global risky assets. Doubts regarding the ability of emerging economies to withstand this situation have also fuelled instability, as well as disappointment with the stimulus measures announced by the ECB at its December meeting. The volatility of the corporate bonds market in the most speculative segment of the US has also contributed negatively. On a positive note, the market's favourable reaction to the first interest rate hike in the US is a sign of strength. Whether this constructive pattern continues in 2016 depends on two necessary conditions: the gradual nature of future hikes in the fed funds rate and an appropriate communication strategy adopted by the Federal Reserve (Fed).

Once again central banks will remain at the centre of the international financial scene. The decoupling of monetary policy between the Fed and other important central banks will undoubtedly be one of the biggest challenges for international markets during the coming year. In particular the implementation of interest rate normalisation by the Fed will play a key role. However, the gradual nature expected for the pace of hikes will help to limit potential negative repercussions (see the Focus «The impact of fed funds rate normalisation on US financial markets»).

After seven years of interest rates close to 0%, the Fed has made its first increase and expects the rate of future hikes to be gradual. As expected, at its December meeting the Federal Open Market Committee (FOMC) decided to start normalising the official interest rate with an increase of 25 bps to 0.25-0.50%. The strength of the US economy justified the Fed's decision and future increases will depend on the trend in economic activity and inflation, although the institution repeated once again that the adjustment of the fed funds rate is expected to be gradual. The decision to continue reinvesting matured debt will keep monetary and financial conditions relatively accommodative. Regarding the strategy implementation to gradually tighten up financial conditions, it is worth noting the start-up of the reverse repo facility whose aim is to progressively drain off excess liquidity from the financial system.

Global markets applaud the Fed's decision. The stock markets welcomed the start of interest rate normalisation in the US, especially European stock markets which led the gains in the days following the move. Emerging markets also welcomed the decision even though the new interest rate regime could pressurise those emerging economies that have yet to correct their macroeconomic imbalances. In the US yields on 2-year government bonds rose to above 1% for the first time since 2010 while 10-year bond yields were more stable and remained around 2.25%.

The new global financial environment, an additional challenge for the emerging bloc. The emerging financial context remained fragile during the last month of the year. Persistently weak commodities, the dollar's appreciation and tougher financing conditions are a harmful combination for the performance of emerging assets. However, China, Turkey and India have provided positive surprises in terms of their activity, while Brazil still shows no sign of improvement in terms of growth or correcting its imbalances. The political crisis does not look like improving either, as reflected by the impeachment process of President Rousseff and the Finance Minister's resignation. Given the demanding conditions of the external environment and weak commodities, the coming months will be crucial for weak emerging economies to speed up the correction of their internal imbalances.

The ECB adopts more monetary stimuli in its attempt to boost inflation in the euro area. The institution's Governing Council (GC) introduced a battery of adjustments to make its monetary policy more accommodative. Among the different measures announced after its last meeting of the year, the GC cut the deposit facility interest rate by 10 bps to –0.30%. It also announced changes in the parameters of its asset purchase programme (QE): QE has been prolonged to March 2017 and now includes regional and local debt securities in the eligible assets programme. These new measures, together with the decision to reinvest matured bonds already purchased, are aimed at prolonging highly accommodative monetary conditions and reinforcing the institution's policy to guide interest rates (forward guidance).

The ECB's measures did not convince investors, who were expecting a more aggressive tone from the central bank. This circumstance led, at first, to strong increases in interest rates in Europe's money and interbank markets. Nonetheless, we believe that the growing amount of excess liquidity in the euro area will help correct spikes in short-term interest rates. Initially there were also upswings in the long-term rates on European public debt. In Spain the 10-year risk premium relaxed significantly in December, fluctuating below 110 bps just before the ECB's meeting. However, the fragmentation of the political spectrum after the elections sparked mistrust among international investors and the risk premium rose to more than 130 bps. Such greater political uncertainty will not help the performance of Spain's sovereign debt, especially taking into account the demanding calendar of maturities faced by the Spanish Treasury in 2016. Nonetheless, we do not expect any great tension for Spanish bonds or any sustained deterioration in perceived risk from Spain.

The end of year does not bring much enthusiasm to the stock markets. International stock markets ended 2015 without being able to recover completely from the losses recorded during the episode of stress in the summer. US equity is the big exception and the S&P 500 returned to gains in the overall figure for the year after passing the Fed's acid test. However, relatively high share prices and the current weak context for growth in corporate earnings suggest a somewhat discouraging setting for the US stock market. A more intense sell-off of commodities is a source of risk that will help to preserve this uncertain stock market tone. The doubts regarding the solidity of the high yield segments of the corporate bonds market at a global level, in an environment of declining liquidity in the secondary bond market, is another source of instability. In Europe the new measures adopted by the ECB to make its monetary policy more accommodative were not enough to sustain the optimistic sentiment of previous months although 2016 should be the year in which the recovery in corporate earnings builds up steam thanks to underlying factors that are already well-known. Emerging stock markets were also affected by this dynamic and suffered further losses in December. As has already been mentioned, the reformist momentum in emerging countries represents a fundamental variable for investor confidence to recover. Confidence which should improve as fears diminish regarding the growth capacity of the emerging economies and as it becomes clear that the region's share prices still have significant room for improvement (see «2016: challenges and opportunities in a demanding global financial environment» in MR12/2015).

The strength of the dollar and the slump in oil continue to weigh heavily on the emerging currencies while the euro-dollar exchange rate is still at the mercy of the messages and actions of the Fed and ECB. A strong upswing following the ECB's decision took the euro to 1.10 dollars before it depreciated again slightly after the Fed's announcement, down to 1.08 dollars. In the medium term Europe's currency should continue to depreciate slightly given the growing divergence between the monetary policies adopted by these two monetary blocs. In the commodities markets Brent continues to lose support, furthering its slump to 36 dollars/barrel. Excess supply and the lack of agreement between OPEC members have intensified the weakness of crude oil price, falling to its lowest level since 2004. 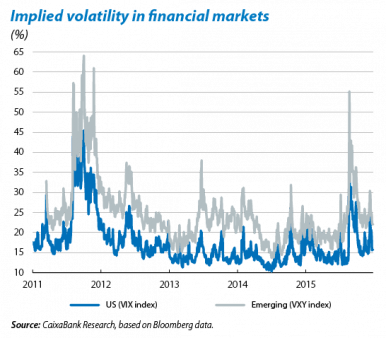 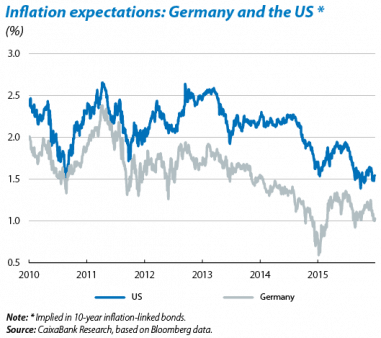 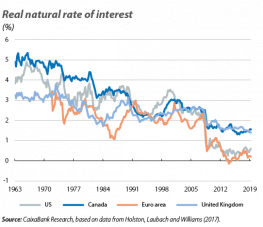