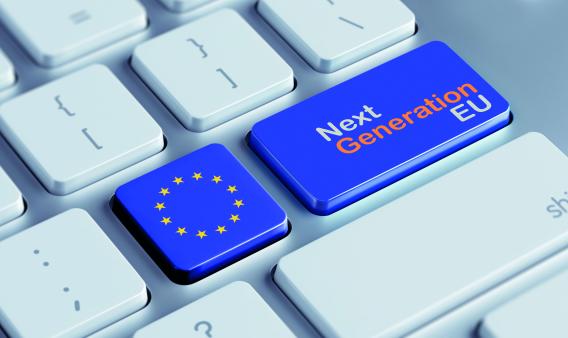 Like electricity in its day, digital technologies are emerging as the new General Purpose Technology (GPT). That is, they are a technology with an enormous capacity to bring change to societies.1 Given their transformative potential and the unparalleled level of investment that European countries will devote to digitalisation thanks to the Next Generation EU (NGEU) funds, it is important to analyse the potential impact that this new digital spending will have on Europe’s major economies.

Before we begin, it should be noted that not all countries will benefit equally from the boost provided by NGEU. The European funds are designed to provide greater support to the economies hardest hit the pandemic. Thus, Italy, Portugal and Spain will be among those most benefited in the distribution, with projected disbursements in the digital sphere of between 2% and 3% of their GDP (see first table), while France and Germany, which benefit to a lesser extent, will receive less than 0.5% of their GDP.

A boost to investment in intangibles

In order to measure NGEU’s direct impact on investment in intangibles, we subtract the amounts corresponding to infrastructure investments (mainly broadband and 5G) from the total quantities expected to be invested in digitalisation shown in the first table, since infrastructure is not considered an intangible. We then add our estimate of the knock-on effect that NGEU-associated policies could have on private investment in intangibles. This calculation is based on the forecasts produced by the European Commission regarding NGEU’s economic impact. We also compute the impact assuming a much smaller knock-on effect (half of the level initially estimated).

The biggest gains occur in the countries that receive the most NGEU funds relative to their size. Italy leads the way, with an increase in the relative weight of investment in intangibles over GDP of between 0.8 and 0.9 pps a year in 2021-2023, while Spain and Portugal follow closely behind with an increase in the range of 0.6 to 0.8.3 These are notable figures (see chart): for Spain, this represents almost half of the increase it experienced in 2013-2015 compared to the period 2000-2007; for Portugal, it is a very similar increase to that which occurred between the two periods; while for Italy, it is a much bigger increase. 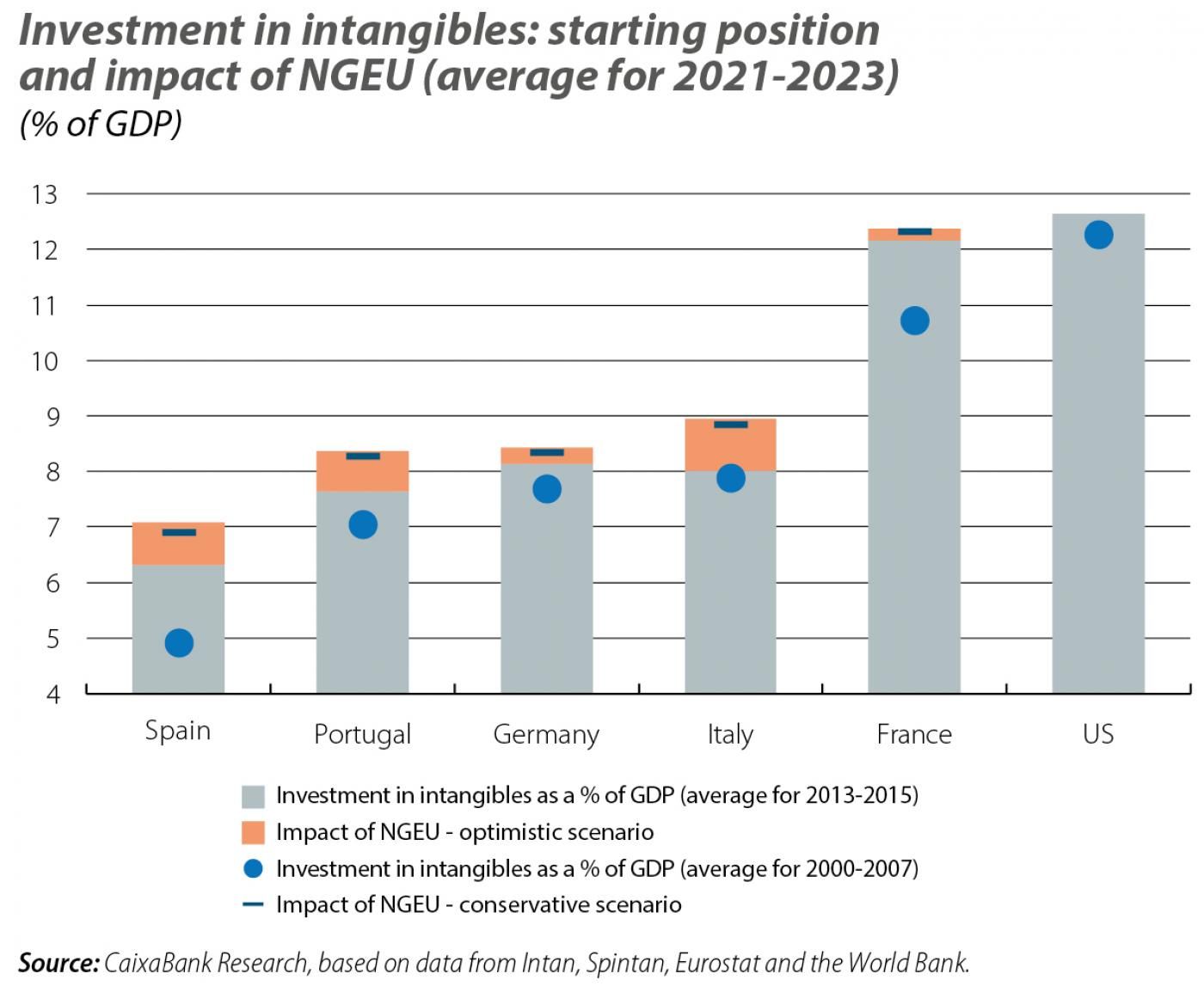 A boost to economic activity

In a second analysis, we built a scenario to assess the short- and long-term impact on GDP of the digital spending foreseen by the national recovery and resilience plans of the major European countries. To do this, we used the levels of investment in intangible digital assets mentioned above, we classified this expenditure according to the type of digital investment detailed in the various plans, and we used the tax multipliers related to digitalisation estimated by the German Institute for Economic Research (known as the DIW).4 Specifically, the DIW provides short- and long-term tax multipliers for the development of databases and cloud services in order to facilitate the use of artificial intelligence, the digitalisation of industry, the formation of human capital and the digitalisation of the health sector and general government administrations. According to this institute, the biggest impacts are those associated with programmes for developing human capital in digital skills, while the smallest impacts are those associated with public sector digitalisation. The last table shows the impact of the funds on GDP. 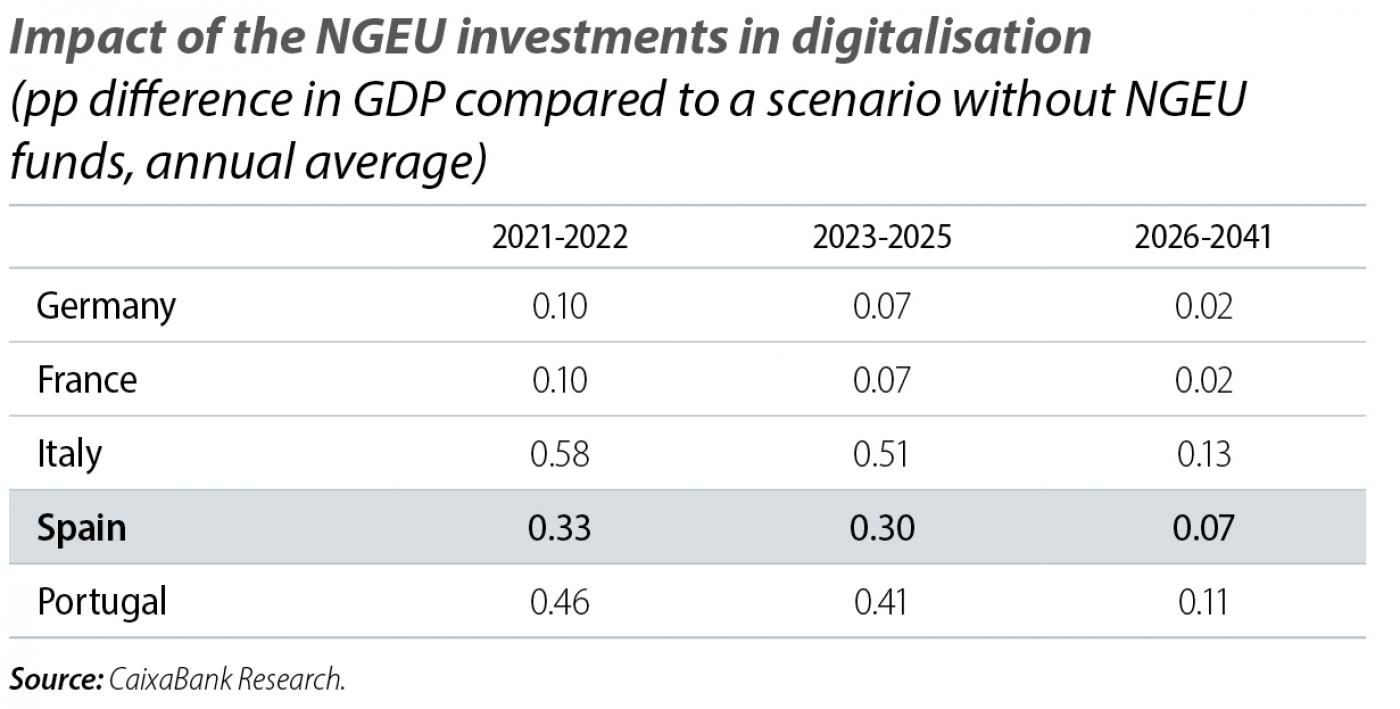 The estimates show that investments in digitalisation can have a substantial impact in the short term, with annual increases in GDP ranging from 0.3% to 0.6% for Italy, Spain, and Portugal, the countries earmarked to receive the most funds. It can also be seen that, in all cases, the investments result in a positive long-term impact on the level of GDP. If we compare the results country by country, Portugal stands out insofar as it is able to achieve a similar return to Italy despite investing substantially less in digitalisation (1.8% of its GDP, compared to 2.9% in the case of Italy). This is due to the greater relative weight that Portugal devotes to investments related to the formation of human capital.5

In short, the NGEU funds have the potential to play a crucial role in accelerating the roll-out and implementation of new digital technologies in the EU and in boosting the economic recovery. The success of NGEU will lie in the effectiveness of the investments themselves, something that we will not be able to evaluate until a few years have passed.