Risks in 2018: (geo)politics and international trade

An analysis of political and geopolitical risks is becoming essential to reliably forecast the economic outlook. Tensions in these areas tend to have a significant impact on global macroeconomic performance, as well as on the ever-nervous financial markets.

According to the geopolitical risk (GPR) index developed by Caldara and Iacoviello, geopolitical tensions have increased in recent months (see the chart).1 This kind of indicator is very useful for assessing (and quantifying) the impact of geopolitical uncertainty on global economic performance. In fact, Caldara and Iacoviello estimate that a spike in tensions such as the one observed in recent months tends to lead to a decline in economic activity and lower asset prices, both real and financial, as well as increased financial volatility, largely due to greater uncertainty.

The escalation in protectionist political forces often lies behind this increased tension between countries, especially in the developed bloc. The so-called rise of populism. Macron’s victory in France and the unexpectedly poor results achieved by the far right in the Netherlands in the first half of 2017 may have eased Europe’s greatest fears. But in September the far right entered the German parliament for the first time since 1945. The far right also performed very well in Austria’s elections in October, while the populist and Eurosceptic billionaire, Andrej Babis, is the Czech Republic’s new Prime Minister.

Generally speaking, these parties may not have enough support to govern but they are already influencing the political agenda and this is very likely to continue over the next few years. This influence is most noticeable in the area of trade. There are two perfect examples of such influence: Brexit, and the protectionist policy President Trump is trying to implement in the US.

The United Kingdom’s withdrawal from one of the most prosperous free trade areas on the planet can be seen as a protectionist shift by the country. However, in recent months the UK’s bargaining position has appeared relatively weak and the country has little support for a hard Brexit. In fact, a reasonably far-reaching agreement in terms of free trade in goods and services and a transition period seem increasingly likely, what is known as a soft Brexit.2 Uncertainty, however, remains very high.

On the other side of the Atlantic, Trump’s «America First» brand of populism has already claimed a few victims. These are climate change, with the US abandoning the Paris Agreement; Iran, with potentially new demands regarding nuclear security; and also international trade, with the US abandoning the Trans-Pacific Partnership deal (TPP). There are also concerns regarding the outcome of negotiations to redesign the North American Free Trade Agreement (NAFTA), which began in summer 2017 and are expected to end at the beginning of 2018.

This agreement between Canada, Mexico and the United States, established in 1994, boosted North American economic relations. Trade flows between the three countries increased substantially, tripling in just a few years, a much higher increase than growth in trade with the rest of the world. And although it is very difficult to separate the ultimate impact of the treaty from the many different events of the time, such as the huge technological changes of the 1990s and 2000s and China’s entry into the international arena, estimates generally point to a distinctly positive effect.

In an economic bloc as strong as North America (which accounts for about 30% of world GDP and 12% of global exports), any final redesign of the Treaty that entails some reversal in trade would weaken global demand and could jeopardise the strength of the current expansion. In the long term, moreover, such a move would compromise the productivity gains achieved through these countries becoming more open to trade, something that the region and, in particular, the US cannot afford.

We believe the NAFTA renegotiations will ultimately be constructive, helping to modernise the agreement. But we cannot be sure. In particular, because the US has made it clear it wants significant changes in the Treaty’s conditions. Changes that allow it, among other things, to reduce the considerable trade deficit it has with Mexico. Changes to cope with increasing Asian competition by altering the «rules of origin». These determine which goods are entitled to preferential tariff treatment under the NAFTA, based on the percentage of intermediate inputs from the US, Mexico or Canada. At present the US believes they allow too many non-US inputs to enjoy the advantages of the free trade region. And the US also wants to lower existing barriers to trade in digital services. Demonstrating its willingness to push for far-reaching change, it has also proposed a sunset clause every five years if all three countries fail to ratify the agreement. As this would increase uncertainty and depress investment flows, we do not believe such an extreme proposal will succeed. However, there could be a compromise, such as the one proposed by Mexico a few weeks ago, in which the status of the agreement would be reviewed every five years.

Brexit, the NAFTA renegotiation and the US withdrawal from the TPP and TTIP (the agreement it was negotiating with the EU) may give the impression that the world is embarking on a new protectionist phase. But the truth is that, outside the borders of the US and UK, globalisation continues to expand steadily, with several significant multilateral trade agreements under negotiation or virtually signed.3 In November, for example, Japan, Canada and Mexico, along with the other countries in the original TPP, agreed to continue negotiations without the US economy. The US had been a key member for two reasons. First, because of its size. With the US, the countries under the umbrella of the TPP accounted for 40% of world GDP and around a quarter of trade flows. These figures fall sharply without the US but they are still relevant. For example, the remaining countries still account for an impressive 15% of world exports. Secondly, because the US was demanding high standards related to intellectual copyright and also in areas such as labour where, for example, it was demanding compliance with International Labour Organisation standards. However, the determination of the other countries to carry on is highly significant politically, sending a clear message in favour of continuing to work towards greater trade integration at a global level. They have also announced their intention to maintain high standards in the final agreement, which will probably be reached early in 2018.

A new trade agreement (the RCEP) is also being forged in Asia that will encompass 16 countries, including especially China, Japan and India, the region’s three largest economies. Although the RCEP cannot be considered a substitute for the original TPP, since it focuses only on reducing tariff barriers in a region where tariffs are already relatively low, the inclusion of India, a large economy whose tariffs are still high, has huge potential. We should remember that, 25 years ago, China hardly traded with its neighbours (and even less with the rest of the world) but is now the leading exporting power.

Finally, the group of countries that make up the EU is not missing out either. This year agreements have already been signed with Japan and Canada and negotiations are currently underway with the four founding countries of the Mercosur bloc (Argentina, Brazil, Paraguay and Uruguay), among others (see the diagram). The agreement with Japan not only sets up a free trade area that rivals NAFTA in size and scope but also sets very comprehensive standards and provisions regarding the environment, labour market and intellectual copyright, in line with the high degree of development of both countries. The agreement with Mercosur countries, however, does not aspire to be as broad in non-tariff and regulatory issues as the agreement with Japan or Canada, although it is relevant for many economic sectors (such as agriculture).

Trade’s centre of gravity is fast shifting from the Atlantic to the Pacific. The US tried to establish its industry regulations as international standards through the important economic treaties it was negotiating but now it seems to have renounced this aim, at least for the moment. This new situation must be seen as an opportunity for the EU which, providing it acts quickly and effectively, now has more leeway to influence the rules of global trade. China will not make this easy and another very likely obstacle is the potentially new US president in three years’ time.

1. The Geopolitical Risk Index counts the number of words related to tensions and geopolitical acts in the main newspapers. See https://www2.bc.edu/matteo-iacoviello/gpr.htm for more details. 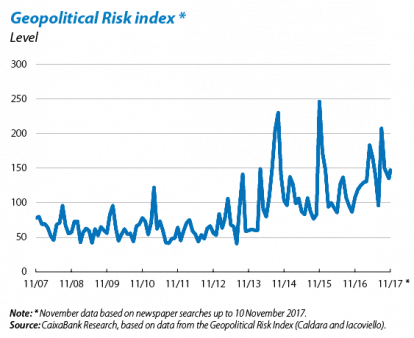 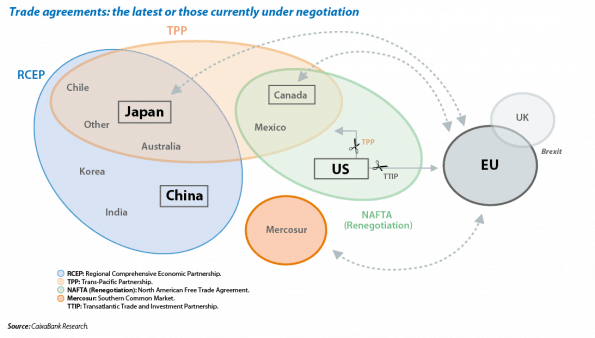