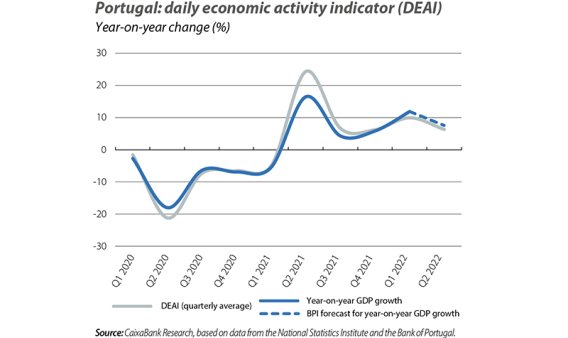 Economic activity has been buoyant during Q2 2022, but the signs for the rest of the year point to a slowdown

The daily economic activity indicator climbed by 2.6% quarter-on-quarter in Q2 2022, suggesting that our forecast for GDP growth in the quarter (0.3% quarter-on-quarter) could be exceeded. Consumption has continued to be the star component, as shown by the strength of the partial indicators (retail sales, card transactions and car sales). The resilience of the labour market, with the number of unemployed people falling by 10.7% in April and May compared to Q1, has continued to support household spending. However, the signs point to a loss of buoyancy in the coming months, given the deterioration in household confidence and in the business outlook across all sectors in June, with the exception of industry. During Q3 2022, the impact of the slowdown of the country’s major trading partners could begin to be felt in the performance of goods exports, as well as being reflected in more cautious behaviour on the part of domestic economic agents, although these dynamics may be partially offset by the anticipated pull from tourism. The risks are accumulating at the end of the year due to the high uncertainty surrounding energy supplies for the winter, particularly in the economies of northern and central Europe. For now, we remain cautious and expect the economy to stabilise, although the risks are concentrated on the downside and are growing. 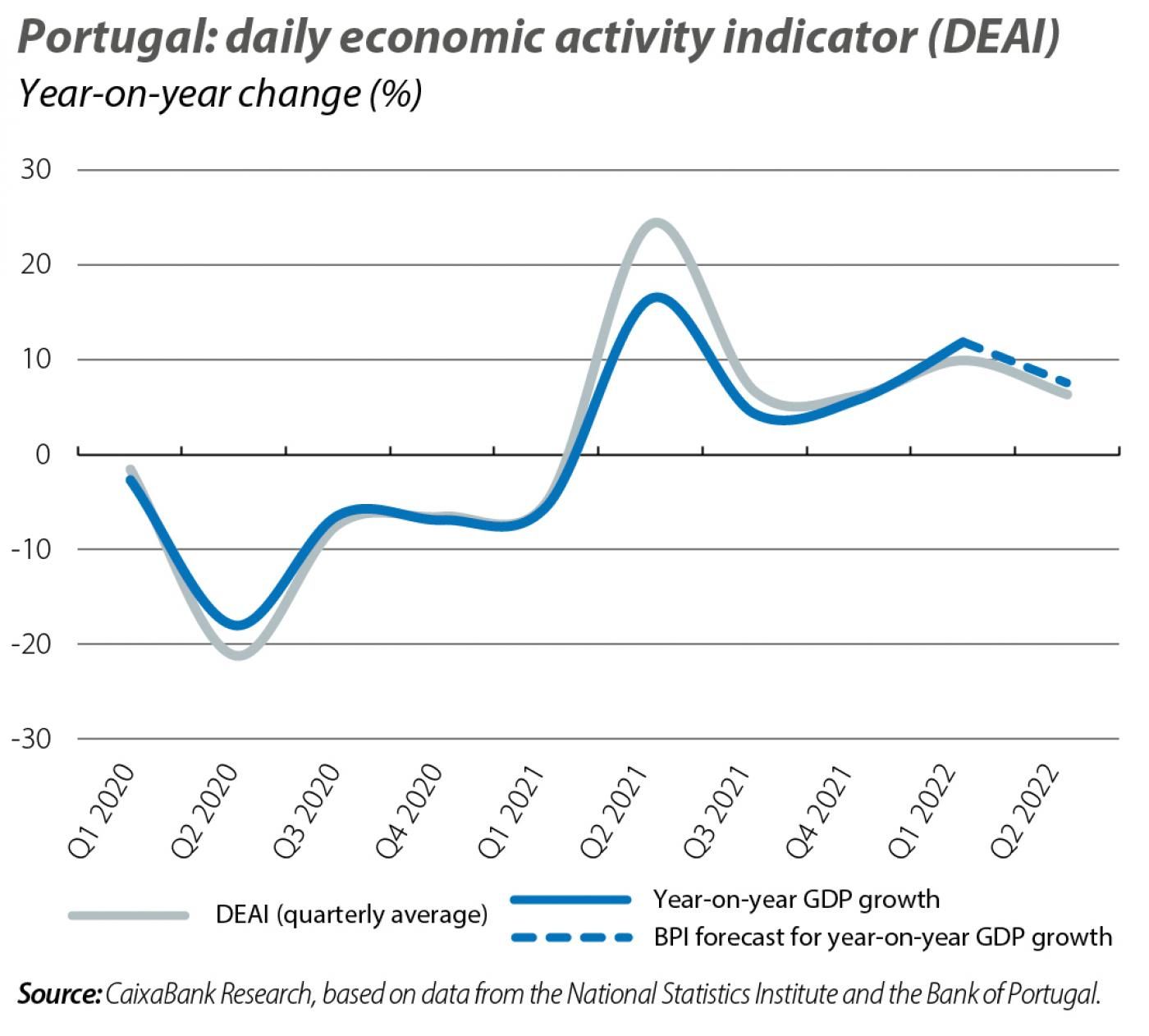 No let up in inflation in June

The National Statistics Institute’s preliminary estimate for June places inflation at its highest level since December 1992 (8.7%). Energy products, with inflation of 31.7%, continue to push up overall inflation, and at a time when food prices have somewhat stabilised, the behaviour of the energy component will be key in determining what happens to inflation over the coming months. The National Statistics Institute’s Home Price Index rallied 12.9% year-on-year in Q1 2022, the highest growth in the historical series. This surge in prices raised the average value of homes sold to 185,600 euros. The available data suggest that this trend has continued in Q2: according to valuations for mortgage applications, the average value of homes per square metre rose in May to 1,380 euros (+3.7% versus the end of Q1), while the home price index produced by Confidencial Imobiliário suggests a similar pattern (+3.9%). We believe that the recent change in the macro-prudential measure (concerning the maximum repayment period and its dependence on the age of the borrower in the case of new home loans), coupled with the cycle of reference rate hikes, will slow this trend. The consolidation of the public accounts continues

In the first five months of the year, the consolidated general government balance, in cash terms, stood at –0.4% of GDP. This contrasts with a deficit of 6.5% of GDP in the same period of 2021 and of 0.7% in the first five months of 2019. The improvement over 2021 is the result of significant revenue growth (+16% year-on-year), while spending fell moderately (–0.7%). This pattern, together with the publication of the deficit in national accounting terms for Q1 2022 (0.4% of GDP), supports CaixaBank Research’s estimate that in 2022 the deficit could be reduced to around 1.7% of GDP, compared to 2.8% in 2021. However, the prolongation of the Russia-Ukraine conflict, the signs of a slowdown in economic activity and the rise in interest rates (yields on the 10-year OT have risen by 44 pps since the beginning of the year) pose a challenge to the objective of reducing the public deficit. The quality of credit improved in Q1 2022

The NPL ratio fell to 3.6%, 1 decimal point lower than at the end of 2021 and 1 pp below the rate of a year earlier. This improvement occurred both in the private individuals segment and in that of non-financial firms. In the case of the former segment, the NPL ratio fell to 2.7%, while in the latter it fell to 8.0%. The stock of credit granted to the private sector, meanwhile, grew 2.6% year-on-year in May. Credit to private individuals maintained the growth rate seen in April (3.7% year-on-year), but credit to non-financial firms fell 0.8%. Private-sector deposits, on the other hand, continue to grow at a steady pace: 8.2% year-on-year in May, with the deposits of private individuals up 7.0% and those of companies up 11.8%. 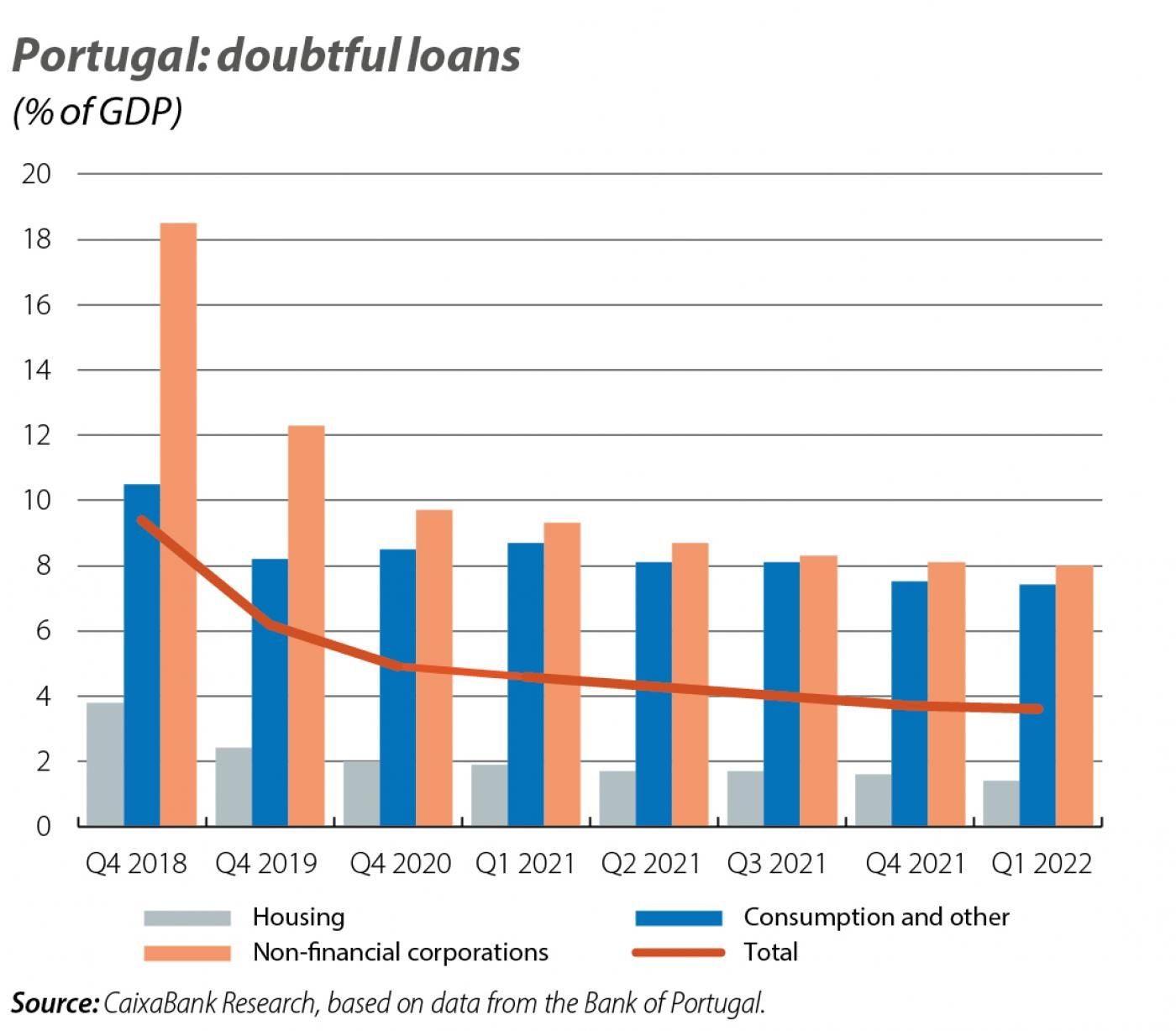 The normalisation of tourism underpins the external accounts

The numbers of guests and overnight stays are approaching pre-pandemic figures. In particular, in May the number of guests was just 3% below the level of May 2019, while the number of overnight stays was 1% below. Although the pace of recovery among non-resident tourists is slower than that of domestic tourists, these data show a certain normalisation of the sector, which looks set to continue and intensify during Q3 of this year. At the same time, the sector’s performance underpins the country’s external accounts: in the year to date up to April, the cumulative balance of services stands at 3 billion euros, more than five times the value for the equivalent period of 2021. However, the fact that Portugal is a net energy importer means that the external accounts continue to be penalised by the high prices in the international commodity markets associated with this component. The current account deficit for the 12 months to April of this year has deteriorated, reaching –3.7 billion euros (–1.8 billion for the 12 months to April 2021).