Q2, a turning point for our economy

In April and May, there has been a widespread recovery in the economic indicators thanks to progress in the vaccination roll-out and improvements in the data relating to the pandemic. Moreover, we expect this recovery to continue and to gain momentum in the second half of the year. Hospital pressure has reduced in May to lows not seen since September, and the month ended with more than 95% of the high-risk population (those over 60 years of age) having received at least one dose of the vaccine, marking a key milestone for the continued easing of restrictions. Notably, the vaccination rate remains well above the target rate (to vaccinate 70% of the population aged over 16 by the end of September). This rapid vaccination rate will allow household consumption and tourism (especially domestic and European tourism) to pick up over the coming months, with NGEU funds being added in the second half of the year. Thus, we maintain our forecast that the Spanish economy will grow by 6.0% in 2021, while for 2022 we have increased the expected growth by 0.4 pps (from 4.4% to 4.8%), since the implementation of the NGEU funds anticipated in 2021 will be concentrated in the second half of the year, with their impact focused in the closing stages of 2021 and early 2022. The improvement is apparent across a wide range of economic activity indicators. The CaixaBank domestic consumption indicator, which is built using Spanish bank card activity, shows a particularly strong rebound. It registered year-on- year growth of 6% in May (+1% in April and –4% in Q1 2021), coinciding with the end of the state of emergency on 9 May and the subsequent lifting of restrictions. The Purchasing Managers’ Indices (PMIs), which reflect business sentiment, were no exception. The PMI for the industrial sector reached 59.4 points in May (57.7 in April), remaining comfortably in expansive territory (above 50 points) and marking the highest rise since May 1998. Its counterpart for the services sector also registered a significant rebound which placed it at 59.4 points (54.6 points in April), the second consecutive month of growth in the sector’s activity. 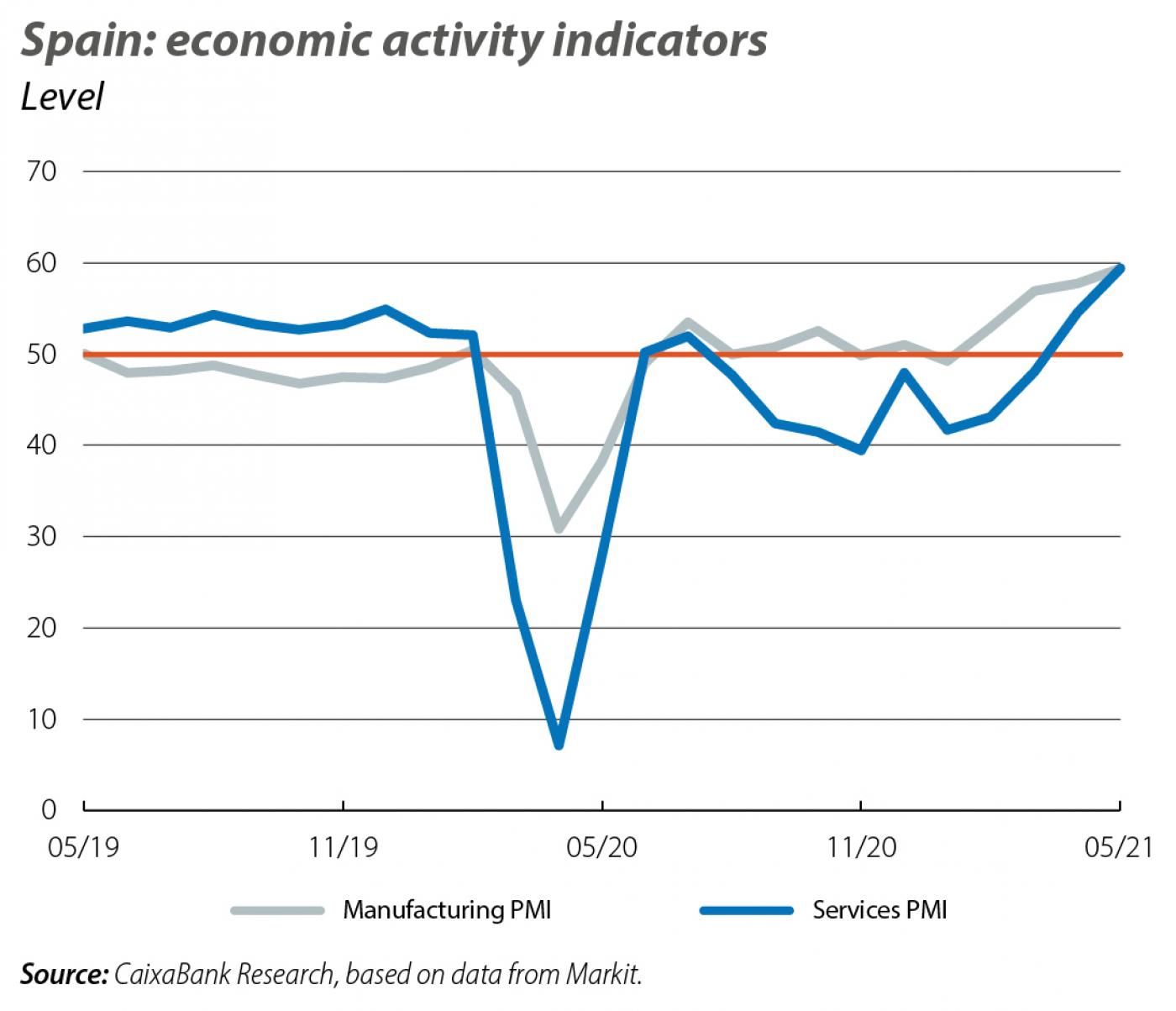 The labour market is added to the list of good news

In particular, the data for May showed a significant advance in social security affiliation and a fall in the number of workers affected by furlough (ERTE) schemes and those registered as unemployed. Affiliation increased by 211,923 people in line with the usual figure for May, which is the month of the year with the highest increase in employment (+217,500 on average between 2016 and 2019). In all, there were 711,000 more people registered with social security than a year earlier, including those on furlough, with a year-on-year growth rate of 3.8% (3.2% in April). If we remove the base effects, the number of affiliates not on furlough declined by 5.7% year-on-year in May, an improvement over the April data (–6.1%). The trend in registered unemployment has also been positive, with a marked decrease compared to April (–129,378), although the number of unemployed people remains very high (3.78 million). Finally, the number of workers on furlough fell to 542,000 at the end of May (–95,414 compared to the end of April). This is an encouraging trend which we expect to continue over the coming months as the tourism sector recovers. Inflation climbed to 2.7% in May (2.2% in April). Pending the breakdown by component, the increase is likely to be down to the rise in fuel prices compared to the declines observed a year ago in the midst of the first wave of the pandemic in Europe. On the other hand, core inflation (which excludes the most volatile components) stood at 0.2%, a modest increase of 2 decimal points over the previous month. Thus, headline inflation remains dominated by the base effects in energy prices, which will fade during the course of the year, while the core components remain at very moderate levels. The public accounts continue to be affected by COVID-19

In particular, the consolidated general government deficit, excluding public local corporations, stood at 1.3% of GDP in Q1 2021 (0.3% in Q1 2019 and 0.9% in Q1 2020). The increase in the deficit compared to Q1 2020 was driven by the expenditure side, which increased by 4% while income remained virtually flat (–0.1%). The deterioration in the
public accounts is expected to diminish during the course of the year as the economic recovery gains traction and the economy refuels, something we see signs of in the April government deficit (15% lower than for the period January-April 2020). Public debt, meanwhile, has continued to rise and ended Q1 at around 125% of GDP, +29.5 pps compared to the end of 2019. 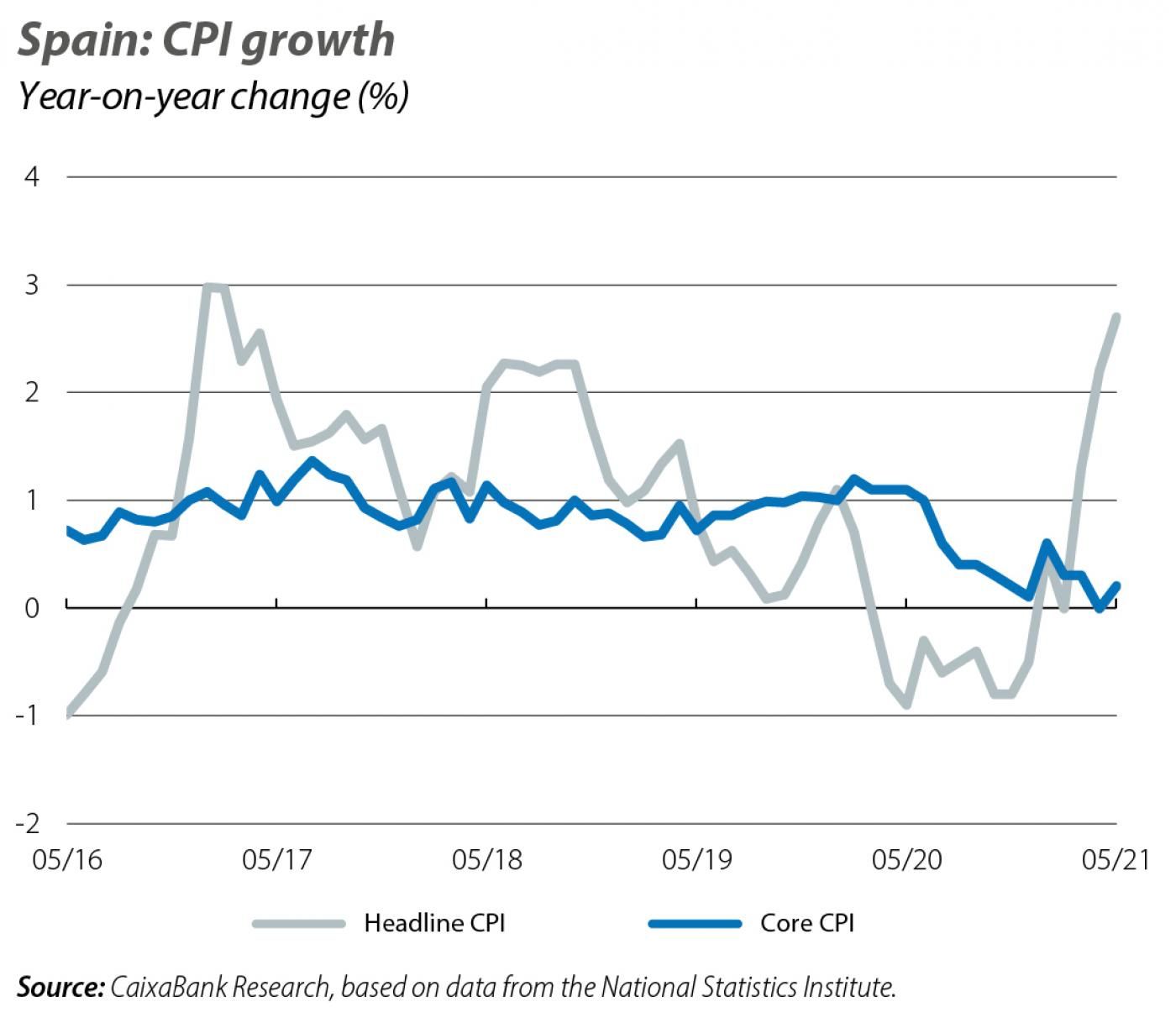 Valuations of unsubsidised housing rose by 0.2% quarter-on-quarter in Q1 2021 and matched the figure for the previous quarter, while in year-on-year terms its rate of decline moderated (–0.9% versus –1.8% in Q4). Thus, despite the economic crisis triggered by COVID-19, the real estate sector is showing remarkable resilience thanks to a strong starting position among homes (low aggregate indebtedness), a real estate market without excess supply, a decisive economic policy response that has allowed household incomes to be sustained and accommodative financial conditions. It is particularly noteworthy that home sales have followed a very encouraging trend in the first quarter of the year, driven by strong sales of new housing (+10.1% on a cumulative basis in the period January to March compared to the same period in 2019). 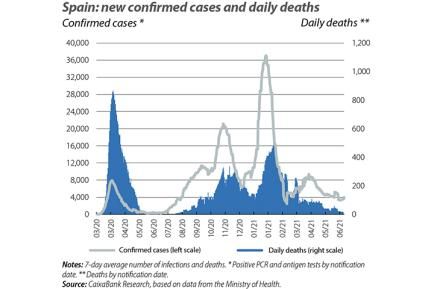 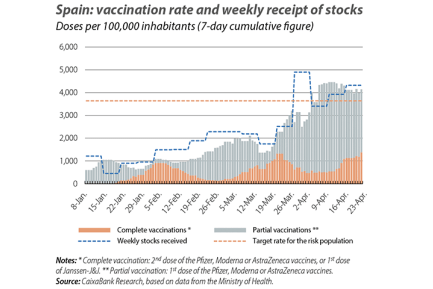