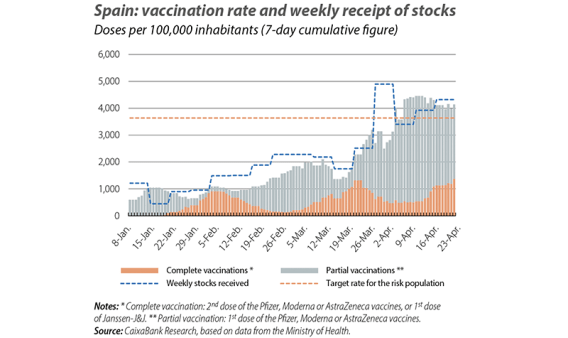 The race between the vaccines and the pandemic intensifies

Following the end of the third wave of infections in March and the subsequent easing of restrictions, in April the number of infections increased very gradually until it stabilised in the last two weeks at around 8,000 infections a day. While still a significant figure, this is a far cry from the peak of 36,000 registered at the height of the third wave. As such, it is still uncertain whether we are in the run-up to a new wave of the pandemic, or whether the contained rise in infections of recent weeks is a sign that the vaccinations are having an impact on aggregate transmission rates – the key to the economic recovery over the coming quarters. During the week of 22 to 29 April, the infection rate stood at 232 cases per 100,000 inhabitants, very close to the threshold of 250 that is considered critical, while the percentage of ICU beds occupied by COVID patients hovered around the critical threshold (25%). As far as the vaccination roll-out is concerned, the data show a marked acceleration driven by an increase in the receipt of stocks. In particular, the vaccination rate of the last three weeks was already above that required to achieve the government’s target of vaccinating 70% of the population over 16 years of age by the end of September. The current rate is also higher than the rate required to have vaccinated 90% of the population over 60 years of age (the population most at risk) by the end of May, a key milestone to allow for further progress in the easing of restrictions, as well as allowing both a more sustained economic revival and a recovery in international mobility for the summer. GDP fell by 0.5% quarter-on-quarter in Q1 2021, a figure in line with our forecasts, and stood 9.4% below the pre-crisis level (Q4 2019). The decline in economic activity in Q1 is hardly a surprise given that the quarter started off on a bad footing, severely affected by the third wave of infections (with the consequent tightening of restrictions) and the impact of Storm Filomena. However, there was a marked improvement during the course of the quarter and the final impact on economic activity was contained. By components of demand, the decline was mainly due to the drop in private consumption and investment (−1.0% and −1.9% quarter-on-quarter, respectively). In contrast, public consumption maintained the positive tone of the previous quarters and grew by 0.5% quarter-on-quarter, while foreign demand also made a positive contribution due to imports declining by far more than exports. Uncertainty sets the pace in Q2

Although the vaccination process began several months ago, the race between the vaccines and the pandemic will never be more apparent than in the current quarter. With just over 25% of the population having already received a first dose of the vaccine at the end of April, the prospect of accelerating the vaccination roll-out could prove to be an impasse, especially given the evidence of its effectiveness and the experience of countries such as the United Kingdom, which has seen a significant decline in infections with just over 50% of the population immunised with at least one dose. However, uncertainty remains high. For the moment, economic activity indicators available for the month of April show that the recovery which began in March continues. CaixaBank’s domestic consumption indicator remained flat in year-on-year terms in April, above the −2% year-on-year registered in March and the −4% for Q1 2021 on average. The PMI for the industrial sector continued to rise, reaching 57.7 points in April (56.9 in March), the highest reading since December 1999. Furthermore, the counterpart index for the services sector rallied to 54.6 points, the first time that it indicates growth of economic activity in the sector since July last year and the highest level since the end of 2019. 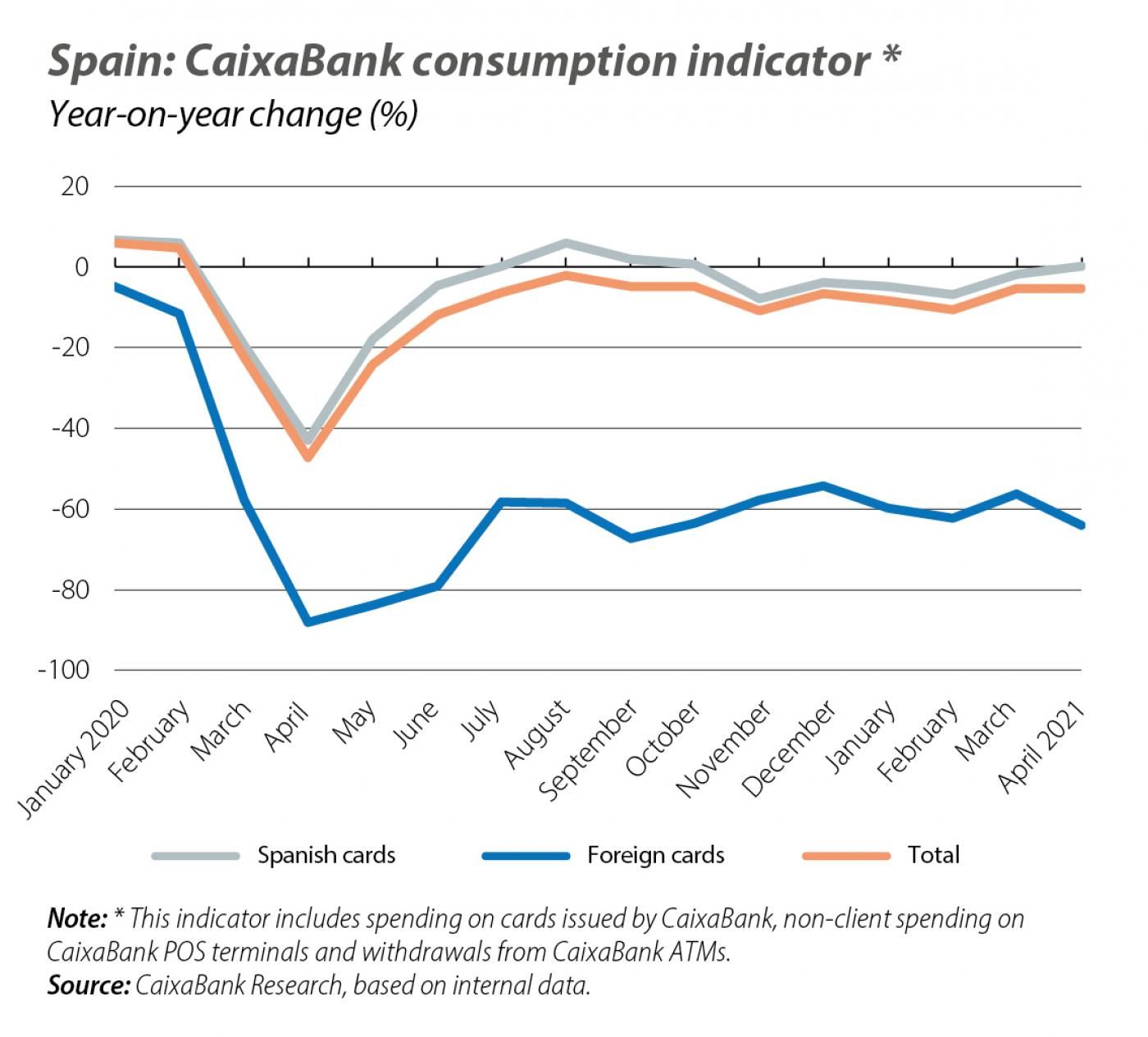 The employment and unemployment data were relatively encouraging in Q1, but the adverse weather conditions, the lockdowns in the wake of the third wave of COVID-19, and the re-introduction of mobility restrictions led to a fall in the number of hours worked and in the working population. In particular, on the upside, the decline in employment (−0.7% quarter-on-quarter) is common in Q1, and in seasonally adjusted terms it maintained a smaller but still positive growth (+0.5%). Unemployment also fell by 65,800, to 3.65 million, and the unemployment rate fell by 1 decimal point, reaching 16.0%. However, on the downside there was a reduction in the number of effective hours worked (−1.6% quarter-on-quarter), reflecting a sharp increase in the number of employed people who did not work due to sickness and disability (+96,300 in the quarter, +221,100 compared to a year ago). The labour force declined by as many as 203,400 people and broke the recovery trend of the previous quarters, perhaps a reflection that the mobility restrictions have reduced employment opportunities. The average number of people registered with social security, meanwhile, increased in April by 134,396 to 19.055 million people, placing the figure above 19 million for the first time since March last year. Employees affected by furlough (ERTE) schemes, who continue to be registered with S.S. and are not counted as unemployed, declined by 86,910 to 650,180 on average. Thus, according to our estimates, the number of registered workers not affected by an ERTE scheme will have fallen by 6.1% year-on-year in April, an improvement compared to the decline experienced in March (−6.5%). In April, inflation continued to climb sharply and reached 2.2% year-on-year (1.3% in March). Pending the breakdown by component, this surge is likely to be entirely driven by energy prices. If this flash estimate is confirmed, electricity prices would register a new rebound, while fuel prices would continue to make a positive contribution due to the fall in April last year. In contrast, core inflation (which excludes the most volatile components) fell by 0.3 pps to 0.0%, reflecting the contained behaviour of economic activity. Progress on the Recovery Plan in Spain

At the end of April, the Spanish government sent the Recovery Plan needed to access NGEU funds to the European Commission. This plan sets out the anticipated distribution of the 70 billion euros of transfers which Spain is due to receive from the European Recovery Mechanism between 2021 and 2023. It includes a combination of investments which can be quickly implemented, such as the refurbishment of housing (€6,820 million), transport infrastructure (€6,667 million) and sustainable mobility (€6,536 million), together with other more medium-term investments, such as digital networks and 5G (€4,000 million) and renewable hydrogen (€1,555 million). With regard to reforms, a simplification of labour contracts is proposed in order to reduce the pronounced duality of the labour market, although details on this reform, as well as on the pension and taxation reforms, remain scarce. 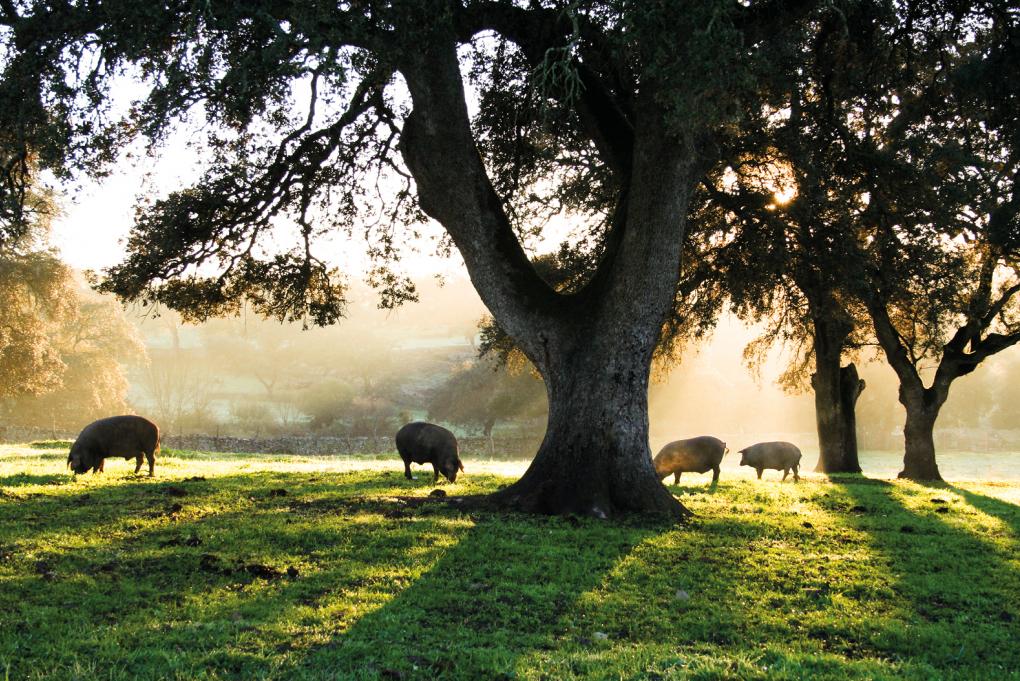