Europe’s social policies at a crossroads

Globalisation, technological changes and migration are rapidly transforming the production processes and labour markets of Europe’s economies. Although benefitting society as a whole, they are also increasing inequality and the number of people at risk of social exclusion.1 Certain groups of individuals are particularly affected, precisely the ones hardest hit by the economic crisis of the past few years. Social assistance programmes therefore require enough resources and those resources should be used with the utmost efficiency.

Social policies in Europe date back to the end of the 19th century when, in Germany, Otto von Bismarck introduced insurance systems for health, occupational accident and retirement. Since then, and particularly after the Second World War, the cover provided by pension and public health systems has been widened, as well as developing assistance programmes for families, the unemployed and the disabled, among others. In 2016, public social spending in the EU is worth 23.6% of GDP. How this spending is distributed among the different programmes varies widely. However, in general most of the resources are allocated to the public pension and health system (see the second chart).

Social programmes reduce income inequality and poverty and are a means of stabilising the economy at times of crisis. In 2014, for instance, tax collection and income transfers reduced income inequality in the EU by 38% on average, according to OECD figures.2 However, at a time when public finances are under intense pressure, such programmes not only need to be effective but also efficient, achieving the desired goal in the best way possible. The design and implementation of these programmes is therefore crucial, be they public or private, as well as ensuring they are systematically evaluated.

Nevertheless, the changes occurring in today’s society are raising doubts as to whether the mechanisms created over the past few decades to encourage equal opportunity are still valid. In addition to systems used traditionally to protect against illness, disability, old age or unemployment, increasingly greater emphasis is being placed on the educational system. It is crucial to act in this area, from nursery right through the whole educational process, including university and vocational training and life-long learning. Such actions help to promote equal opportunity at a time when technological changes are altering the labour market’s requirements.3 A good example of this is the European Pillar of Social Rights, approved in November 2017 by the European Commission. This focuses especially on reformulating how Europe’s labour market and welfare system work. The Pillar’s principles range from equal access to education to fostering mechanisms that improve job stability. Also important is the proposal to introduce a minimum wage for anyone with insufficient resources, as well as incentives for people who are able to work to join the labour market. However, creating such a safety net in a changing society is a complicated task that requires an even greater effort.

2. Reduction in the Gini coefficient as a result of transfers and taxes in 2014 (OECD, 2016, «Income Inequality Update»). 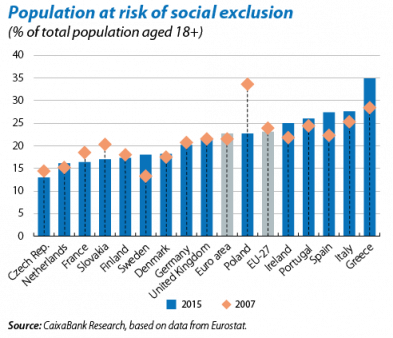 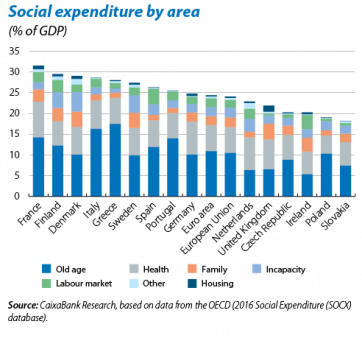