On 20 August, Greece will complete its third financial assistance programme since 2010. Finally, the country’s economy appears to be in a much stronger position. In 2017, Greece recorded positive growth rates and is expected to maintain a growth rate of around 2% over the next two years. Furthermore, the primary fiscal balance has remained at around 4.0% of GDP since 2016, one of the highest levels in the EU.

Despite this, the financial sustainability of the Greek public sector remains in question. In particular, Greek public debt remains at very high levels, close to 180% of GDP. Although the IMF and the European Commission expect the country’s debt to continue to gradually fall to below 150% of GDP in 2030, this forecast is based on assumptions that may not be feasible.1 As shown in the first chart, faced with less positive economic scenarios, the debt does not fall and even increases.

This situation would surely be unsustainable if it were not for the fact that most of the debt is long-term, which allowing the financing2 requirements to be contained in the next few years. Specifically, almost 70% of the Greek debt – the equivalent to 128% of the country’s GDP – is made up of very long-term loans granted by «Official» creditors at interest rates well below market rates.3 In addition, the debt in the hands of private investors, which accounts for around 15% of the total (and 28.7% of Greece’s GDP), has a relatively long maturity, of 12 years.4

Nevertheless, within 10 years, even in a scenario in which Greece maintains a solid economic growth and a prudent fiscal policy, its financing needs will increase rapidly above the IMF sustainability threshold of 20% of GDP. Furthermore, the cost to refinance the debt will increase significantly, since the market interest rates are expected to be considerably higher than those of the «Official» loans.

Aware of this, the euro area countries have undertaken to implement debt relief measures, such as a new extension of the average maturity of the loans and a deferral of the repayment periods. According to the IMF, however, the adjustment will need to be significant in order to keep Greece’s financing needs below the sustainability threshold (see second chart). At this juncture, the Eurogroup is studying the design of a mechanism which would automatically link debt repayments to the performance of the Greek economy. For example, if Greece were to grow slower than expected, the average maturity of its loans could be extended or principal and interest payments delayed.

This mechanism would certainly help to reduce the risk of refinancing, by reducing the amount of debt due to be renewed in years with a less favourable outlook. However, it could also weaken the incentives for Greece to continue to implement reforms and to keep the public finances in check. As is already planned, it would be essential for this procedure to be accompanied by instruments that allow the country’s economic and fiscal policy to continue to be monitored. All this ensures that Greece will remain a source of debate over the coming years, even if it is no longer subject to a financial bailout programme.

2. Consisting each year of the sum of the government’s new borrowing needs (primary deficit and interest payments) and the portion of the debt which matures in that year.

3. IMF, ESM, EFSF and the Greek loan facility. The average term of these loans is 23 years. 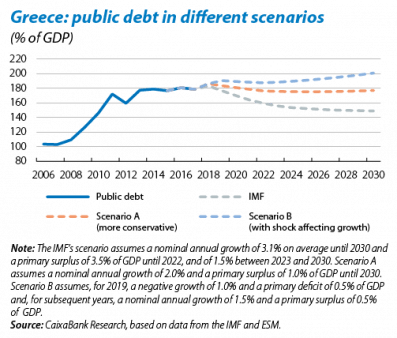 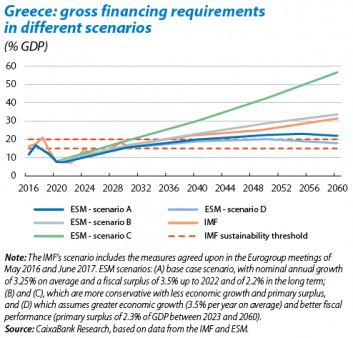