Has the deleveraging of US households come to an end?

US households embarked on an extensive deleveraging process during the economic and financial crisis that started in 2008. This, however, seems to have come to an end. US household debt rose by 78 billion dollars in 2014 Q3 and, far from this being a temporary phenomenon, the rise between 2013 Q3 and 2014 Q3 totals 430 billion dollars. This has been supported by a significant increase in mortgages as well as student and car loans.

Although such absolute figures are revealing they do not always accurately show the degree of debt among households as they fail to reflect growth in the economy and therefore any increase in households' capacity to repay their debts. A more appropriate way of measuring the sustainability of household debt is via the ratio between their level of debt and gross disposable income. In this case the data show a slightly different picture. Although the ratio fell from 115% to 89% between 2008 and 2012, in line with the correction in absolute terms, since the beginning of 2013 it has remained stable at around 90%: precisely the same level as in the pre-crisis period.

Households' stock of gross assets is also a relevant factor in determining their capacity to repay debt. At present, at just over 95 billion dollars, the total gross assets of households are 16% above their pre-crisis levels. The strong recovery in the US economy, whose average GDP growth in real terms was around 2.2% annually from 2010 to 2014 (close to 4% in nominal terms), and the ultra-expansionary monetary policy implemented by the Fed have supported this significant improvement. An improvement that has been widespread throughout all kinds of assets but especially in financial ones, accounting for 70% of total assets. Financial assets in particular have grown by 48% since the minimum reached during the crisis. Along the same lines, the net wealth of US households has managed to set record highs in almost all quarters after its sharp drop in 2008 and, in terms of disposable personal income, this wealth is now approaching the peak reached at the end of 2006 (see the third graph). Nevertheless we need to bear in mind the fact that this financial wealth is likely to correct itself once the Fed withdraws the ultra-expansionary measures that supported such growth.

In short, US households are once again increasing their level of debt but from sustainable levels and at a rate in line with their rising income. Such a situation allows the US economy to face the gradually consolidating cycle of growth with optimism. 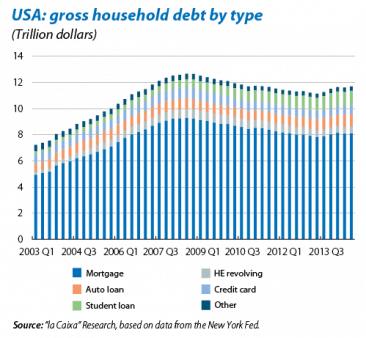 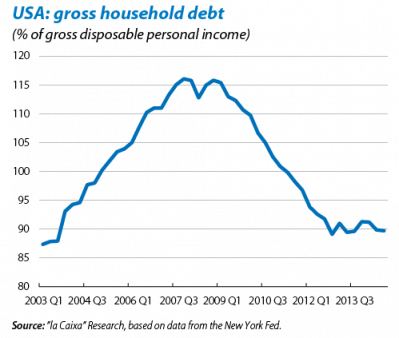 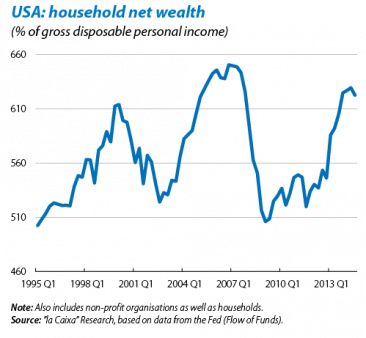