Outlook and doubts for the emerging economies

Growth will speed up in the emerging bloc in 2016 and, what is more, will do so from already considerable levels. But the emerging bloc will grow less than forecast a few months ago, because it will have to handle a threefold shock: China's slowdown (the largest emerging economy of all), low commodity prices and tougher financial conditions due to the start of the US interest rate hike. Many of the emerging countries are confronting these shocks from a healthier position than a few years ago and with a larger number of macroeconomic tools available to tackle them so it is unlikely that the bloc as a whole will enter a phase of widespread turbulence but we cannot rule out some temporary setbacks which, if they occur in large economies, could be noticed beyond their own borders.

In general, growth prospects for the emerging bloc in 2016 are positive. On aggregate it will go from growing 4.0% GDP in 2015 to 4.5% in 2016:1 a considerable advance but less than had been estimated at the end of 2014 (namely 5.2%).2 This is a cut of no less than 0.7 pps which is precisely the consequence of the aforementioned shocks. Although the deterioration in all the emerging economies' growth prospects for 2016 has been quite widespread, three of them lie behind a large proportion of the region's worsening outlook: Brazil, Russia and China (see the first graph). Three large emerging economies with three different stories.

The case of Brazil is certainly one of the most worrying.3 Its growth prospects for 2016 have gone from +2.2% to –1.0% in just under a year, reducing growth for the emerging bloc as a whole by 0.16 pps as the country represents a 5% share of the total. Latin America's largest economy has entered recession due to the combined effect of weak exports and falling domestic demand. The shock provided by commodities and China's slowdown lie behind these trends as Brazil is a large exporter of minerals and foods (representing almost 50% of all its exports) and their main destination is precisely the Asian giant. The likelihood of a tougher international financial environment due to the Fed's imminent interest rate hike could also hit the country hard: Brazil's corporate debt has multiplied by 12 since 2007. The government is also facing political difficulties in carrying out far-reaching reforms, including the fiscal adjustment announced for 2016 and improving macroeconomic imbalances, both internal (inflation stood at 9.9% in October) and external (the external deficit stood at 4.3% of GDP in 2015 Q2).

Russia is another emerging economy in full recession and this situation will continue in the coming year. Like Brazil, Russia's growth prospects have worsened over time: for the whole of 2016 they have gone from +1.5% in October 2014 to –0.6% in October 2015, subtracting 0.11 pps from the growth of the emerging group. Undoubtedly the drop in oil prices has been a fundamental factor in the country's recession, whose public revenue and exports are excessively dependent on the energy sector. There is also the country's entrenched geopolitical tension with Ukraine and sanctions by the US and EU following Russia's military intervention. Nevertheless, in spite of the recessionary panorama predicted for Russia in 2016 it is true that the rouble's strong depreciation (one of the largest drops among the emerging currencies in the last 12 months) has helped to temper the weakening in the fiscal and external areas. The currency's greater flexibility, implemented at the end of 2014, has managed to absorb part of the energy shock affecting the country. The latest activity figures also seem to suggest that its economic decline is slowing down: GDP fell by 4.1% year-on-year in Q3, less than the –4.6% in the previous quarter.

Lastly, China's worsening outlook has deducted 0.16 pps from growth for the emerging bloc as a whole, although the case of the Asian giant is very different from that of Russia or Brazil. Firstly, China is still expected to grow significantly in 2016 (+6.3% compared with +6.8% a year ago). Secondly, the shocks facing the Chinese economy are mostly domestic and come as no surprise. Specifically, the waning investor-exporter pattern of growth and the need to shift towards an economic model in which consumption and services play a more important role. Lastly, the country has a wide range of economic policy tools and buffers to tackle any potential surprises (more than in the past and than the other emerging economies). In particular there is margin for greater expansionary measures on the fiscal and monetary front, the country's international reserves are still slightly above 30% of its GDP in spite of the recent drop, it has a considerable current account surplus and its exchange rate is more flexible today than a year ago. Nonetheless, in spite of the country's considerable tools to tackle potential adversities, these are also greater than a few years ago. By way of example, in just seven years corporate, household and public debt has increased by more than 100 points of GDP (from 158% to 283% of GDP).

Turkey, Mexico and especially India are the other large emerging economies whose economic growth prospects have also changed over the last few months: worse for the first two countries (from 3.7% to 2.9% for Turkey and from 3.8% to 2.8% for Mexico) and better for the third (from 6.5% to 7.5%). Turkey and Mexico may have suffered a similar decline but their problems and buffers are different. Certainly both countries will be helped by the good growth prospects of the two largest advanced economies, the euro area and US, respectively. However , Turkey must tackle the threefold emerging shock in a much less favourable context than Mexico: with inflationary tensions (inflation reached 7.6% in October), a considerable current account deficit (6% of GDP in 2015 Q2), high corporate debt in foreign currency (close to 50%)4 and numerous unresolved geopolitical conflicts (Turkish Kurdistan, Syria and the management of refugees, among others).5 On the other hand Mexico's inflation stood at 2.5% in October and its external deficit was 2% of GDP. But, like Turkey, Latin America's second economy is suffering from heavy corporate borrowing in foreign currency and its buffer of reserves, although much larger than both countries had at the end of the 1990s, is still far from the level enjoyed by most of the emerging economies in South East Asia (see the second graph).

India is different from all the previous cases as its economic growth prospects have improved since October 2014. However, one very important point should be made regarding this improvement: India corrected its historical series of GDP for 2012-2014, revising growth upwards by 1.5 pps, which has naturally led to an upward revision of all GDP estimates produced for the country. This change in growth prospects for 2016 is far from merely technical, however, as it shows that the Indian economy has grown and will grow more than estimated in the past, which is always good news, even more so when China is slowing down and India is the only comparable economy in terms of size. The country's macroeconomic context has also improved recently, which will help the growth forecasts to be met: inflation stood at 5.0% in October (compared with 10.7% in 2013), the current account deficit fell to 1.2% of GDP (from 2.5% in 2013) and the fiscal deficit was better than expected in the period between April and August (3.7% of GDP compared with the forecast of 5.5%).

In conclusion, the outlook for growth in the emerging countries is clearly favourable although they will be the focus of attention and concern in 2016 due to the considerable risks represented by China's slowdown, falling prices for numerous commodities and the likelihood of tougher financial conditions. These circumstances could cause more than one emerging economy to catch a cold and it might pass this on to its near neighbours, although such an ailment is unlikely to turn into a systemic malady.

1. According to IMF estimates for all emerging and less developed countries.

2. Comparison of the IMF estimates in its World Economic Outlook in October 2014 and October 2015.

3. See the Focus «Brazil awakens the spectre of financial contagion in Latin America» and «Brazil in recession, contagion to Latin America?» in MR11/2015.

5. See the Focus «Is Turkey still a fragile emerging economy?» in this Monthly Report. 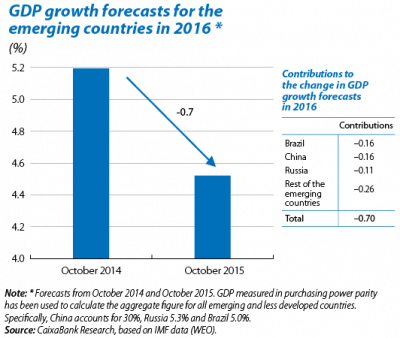 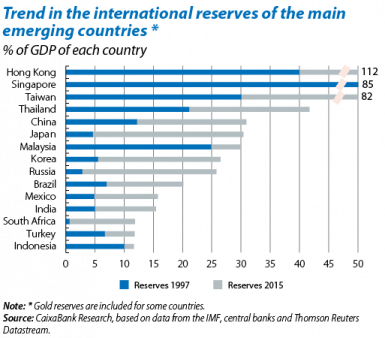