Banking in the face of QE: caught between wishes and reality

In January, the European Central Bank (ECB) announced the start-up of a new unorthodox monetary policy tool: the large-scale purchase of sovereign debt (also known as quantitative easing or QE). With this strategy, the euro area monetary authority aims to combat low inflation and stimulate its economy, reducing long-term interest rates for households and firms and thereby encouraging them to consume and invest. Unlike what happened in the US, where financial markets played an important role, in Europe the role of the banking system will be key to the effects of this measure being passed on to the real economy. The aim of this article is to describe why banks play such a vital role and how their decisions might determine whether the programme is a success.

In Europe, banks form an essential part of the transmission mechanism of any monetary policy decision as financing in the euro area is highly concentrated on banks. Alternative financing channels such as the corporate bond market are not very developed and only accessible for large firms. The success of policies aiming to generate economic growth by stimulating aggregate demand and credit therefore rely on the credit capacity of these financial institutions. In the particular case of QE, moreover, banks will have an additional role due to the size of the public debt portfolio on their balance sheets. As they hold most of the euro area's sovereign bonds, the impact of QE on the price of these assets will depend not only on how much the ECB wishes to buy but also on how willing the banks are to sell them. Both reasons suggest that the success of QE will largely come from two conditions being met: banks deciding to reduce the share of public debt on their balance sheets and this being replaced by loans to the private sector.

Regarding the first condition, since the financial crisis began, banks have preferred to keep most of their assets in liquid, low-risk securities, government bonds being a prime example. This decision has mainly been brought about by two factors. On the one hand, these securities have provided an attractive and very safe return in an environment where the alternative of credit has been too risky and costly in terms of regulatory capital. On the other hand, regulators have introduced new liquidity requirements to tackle any disruption of wholesale funding markets, demanding that banks maintain an important buffer of liquid assets. As QE pushes down yields on public debt and the risk profile of those demanding credit improves thanks to a more favourable macroeconomic environment, the first of these conditions will start to be met and banks will gradually reduce the share of government debt on their balance sheets. However, the credit capacity ultimately freed up will depend on how much is left in this portfolio once the aforementioned liquidity requirements have been met. EBA estimates suggest that the ability of banks to reduce their liquid assets might be limited given that the short-term liquidity coverage ratio for the euro area averages about 115% (100% being the mandatory minimum).

The second of the conditioning factors for QE to be a success is for any freed-up credit capacity to be effectively directed at granting loans. In this respect, the ECB's new programme comes at a good time to underpin the incipient growth in the demand for financing, especially in those countries where economic activity is growing strongly and deleveraging is more advanced. The beneficial effects of QE on credit demand will essentially be noticed in three ways. Firstly, more accommodative monetary policies are expected to keep the euro depreciated, which will reinforce the economic recovery by boosting exports and this will gradually be reflected in the employment figures. Secondly, a flatter interest rate curve will encourage investors to take more risk and their increased demand for risky assets (such as shares, private debt and property) will push up the prices of these assets. This increase in asset prices will result in an improved risk profile for those demanding credit in the future as a larger proportion of the loan being granted will be covered by the higher value of the assets provided as collateral. Lastly, if QE manages to anchor expectations regarding higher inflation and growth in the medium term, those investment projects which have been shelved due to the uncertain outlook could be dusted off, thereby leading to a need for financing.

The increase in demand for credit and its better quality should therefore ensure that yields on risk-adjusted credit become more attractive than investment in public debt. Nonetheless, for credit to expand appreciably, it is necessary to eliminate the obstacles that are still stopping banks from taking on more risk in their balance sheets and relaxing their credit standards. Banks are still facing significant regulatory uncertainty even though the asset quality review carried out by the ECB of the assets of the 130 largest European banks verified the solvency of most of Europe's banking system and clarified the needs of the weakest banks. Over the next two years, both the minimum required eligible liabilities (or MREL) for bail-ins and the maximum level of deleveraging must be defined. Moreover, the ECB has stated that it intends to harmonise regulations in different countries as much as possible, gradually eliminating the different criteria applied discretionally by national supervisors. These three measures could have a significant impact on banks and influence their investment decisions while such uncertainties continue. In this respect, neither do banks have the option of securitising credit and sharing the risk of investment with other agents since the regulations for this kind of security have become considerably tighter after the financial crisis.

Given the uncertainty that still exists, and while securitisation requirements are not eased, we cannot rule out part of the freed-up capacity due to the reduction in the public debt portfolio being used for alternatives to bank credit with more favourable regulatory treatment, at least in the short term. This could be the case of government bonds from the United States or United Kingdom, countries that are starting to consider raising their interest rates and whose securities also enjoy regulatory advantages in capital terms. Another attractive investment in terms of yield could be corporate bonds although they lack the regulatory advantage of government bonds.

All this suggests that, at present, the effects of QE on credit may be rather modest. Nonetheless, it is important to note that QE could have other implications for banks apart from stimulating credit. Some of the restructuring of investors' portfolios is likely to boost demand for bank shares, subordinated debt and senior debt. This will help banks to adapt to the aforementioned new regulatory requirements that require a larger share of capital, as well as bail-in debt, in their funding structure. On the other hand, a prolonged environment of low interest rates will reduce bank profits and encourage them to gain in size, which could help to concentrate the banking industry.

In short, greater economic growth and less regulatory uncertainty are the necessary ingredients to start up a virtuous circle of QE. In the meantime, banks will be hovering between their wish to grant credit and the reality of a still-fragile demand. 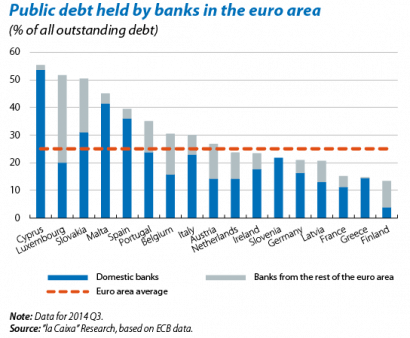 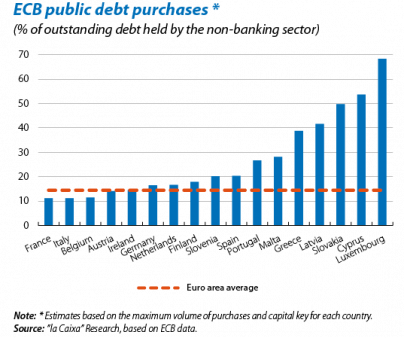